Why the Hurry on Superintendent Gist’s Contract?

The Tulsa Public Schools Board of Education is holding a special meeting tonight. On the agenda is item B-1 under Executive Session regarding Superintendent Gist’s contract extension and renewal. Her current contract is not up for another year, which has raised the eyebrows of several concerned parents and community members. They want to know why Superintendent Gist’s renewal and employment contract are up for negotiation and a possible vote a year early. There is some speculation that the make up of the board will change after the upcoming school board election, and Dr. Gist’s contract will not be renewed under a new board. Thus, the hurried contract negotiation.

There is also concern that part of the Executive Session negotiations include adding an extra three years to her contract beginning in July 2021, so that her term will be a total of four years. I could not receive verification on this from TPS, although I did send an email earlier today.

Here is a screen shot of the Agenda along with tonight’s Executive Session action item. 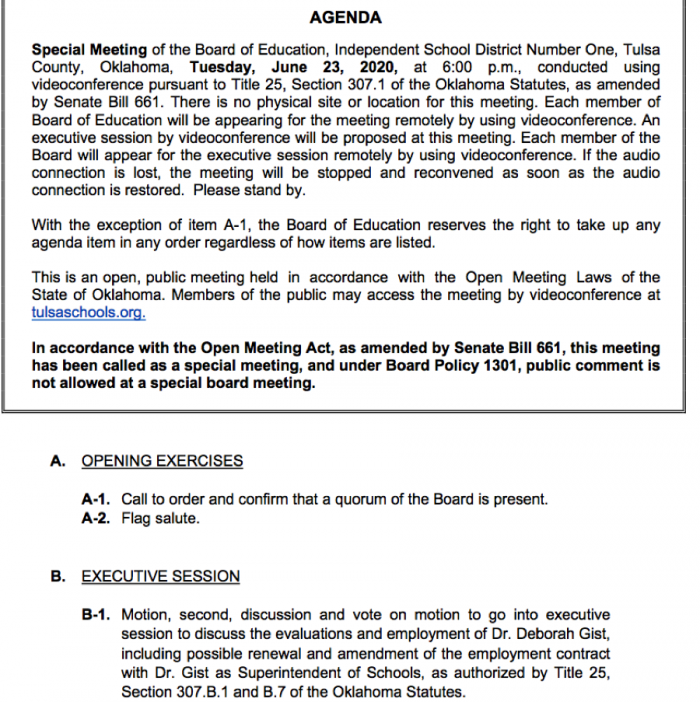 I have received several emails and text messages with this screen shot. The following letter was sent to me, which encapsulates several of the concerns expressed in other emails.

Please do not extend the contract of the Superintendent at today’s special meeting. The contract does not expire until 2021, which means the need to renew is not pressing. We think that the public deserves to have the newly elected board members weigh-in on this matter. The cover of COVID to renew the superintendent’s contract now with what may be lame duck board members is unacceptable for many of us in the community. Please respect the democratic process and allow for the newly constituted board to be the body that makes this important decision, accompanied by public input, including having public hearings.

There is also some concern about a rushed contract negotiation and vote from individuals involved with Indian Education. Theresa Hinman of the Coalition for the Betterment of Indian Education, wrote, “Because of our diverse population, we need a leader in the superintendent position that is open to other perspectives – someone who values community-led discussions on a continual basis.” Hinman says that she sees no reason for a Special Meeting to be called regarding Superintendent Gist’s contract since it doesn’t expire for another year.

TPS parent Melissa Remington is organizing a protest this evening, Tues., June 23, at 6 p.m. at the Education Service Center, 3027 S. Hudson. She wrote in a statement that she is holding the protest “to remind the board that we want to be part of the discussion to extend Dr. Gist’s contract past June 30, 2021. The Board choosing to extend the contract that ends June 30, 2021 to June 30, 2024 in a time of a pandemic is an obvious attempt to block the democratic process to vote on school board members for District 5 & 6 who will be elected in one week. This attempt to slide this in with 24 hours’ notice in a special meeting to extend (her contract) is not in the vein of transparency and accountability our community has demanded. We, the parents, want time to evaluate Dr. Gist’s Covid-19 plan and ask the district to hold off these talks to Oct. 2020. This is how the TPS District handled the last extension and allows the board to properly evaluate the performance of Dr. Gist. This district is going to be asking voters to vote for a 2021 Bond. Given all the recent permanent school closures, we ask the board to hold off. We do not trust what is being done at a time that all the focus is on the plan for the upcoming school year.”

For Dr. Gist’s contract negotiation and vote to come up at this time does seem unusual, especially given the pressing problems that the board must address regarding the school calendar and the health concerns surrounding the coronavirus and its impact on TPS children.

Would it hurt to wait a couple of months to evaluate Dr. Gist and her contract?

A letter from Darryl Bright, Chair of Citizens United for a Better Educational System (C.U.B.E.S.)

Yesterday the Tulsa Public Schools Board of Education announced it will hold a Special Meeting today at 6:00 PM to renew the Superintendent Gist’s contract one year early with a possible extension of four more years. At this meeting, the public cannot voice its input or concerns. The Board will go into Executive Session–the public is not allowed to attend. This cannot be permitted to happen without protest.

Accountability and transparency go hand-in-hand! There is no democracy without public engagement in all aspects of our governing institutions. Superintendent Dr. Gist as the “Moral Authority” of the Tulsa school system should be front and center in a public feedback session. She must address all the various and sundry aspects of this district. She must explain the direction of TPS and the reasons for lack of equity across this district.

For weeks now there have been protests by millions, nationally and internationally, who are demanding a change to be strategically engaged/take the lead in the transformation of generational governing structures. Those structures continue to be futile ground for racism, classism, ableism, and sexism. We must demand strategic engagement and decision-making in a transformation process of the Tulsa Public School system.

Dr. Gist not sign a contract at this time!

The School Board establish a series of public meetings for public input, to express our concerns; and to have our questions answered about the direction of Tulsa Public Schools.  In the renewal process, the public’s feedback must be considered. The decision to renew must focus primarily on how she has improved teaching and learning for ALL children over her tenure as superintendent.