Both mother Sally and the male calf, born on Nov. 07, 2021, are doing well. The calf was born at 12:24 p.m. and weighs 127 pounds. He was taking his first steps within an hour and nursing after two hours, both healthy signs. The two will remain behind the scenes in the Mary K. Chapman Rhino Reserve barn initially.

“Our zookeepers and veterinary staff are monitoring both Sally and her calf closely. We’re happy to report both animals are doing very well,” said Zoological Curator of Mammals Jordan Piha. “Sally is an experienced, attentive mother, so we’re looking forward to witnessing the calf grow and thrive here.”

The white rhino gestation period is 16 to 18 months. Sally was pregnant when she arrived at Tulsa Zoo in October 2020. The calf’s father is Kengele at The Wilds, from a previous breeding recommendation through the Association of Zoos and Aquariums’ Species Survival Plan®. This program works to ensure sustainable populations in human care. Sally has a future breeding recommendation with Tulsa Zoo male white rhino Rudo. 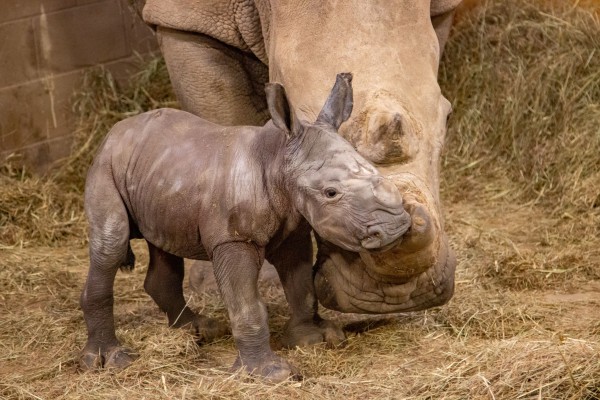 White rhinos are classified as Near Threatened with fewer than 20,000 left in the wild.

About the Tulsa Zoo

The Tulsa Zoo is Green Country’s largest paid daily attraction. The zoo is owned by the City of Tulsa and managed by Tulsa Zoo Management, Inc., a 501(c)(3) non-profit organization. For more information about the Tulsa Zoo, visit www.tulsazoo.org or call (918) 669-6600.

Accredited by the Association of Zoos & Aquariums.