I went to the TPS school board meeting Monday evening to see the “left-wing mob” that Secretary of Education Ryan Walters warned would be there to push their “socialist agendas” about “diversity, equality, and inclusion.” He sent the letter on letterhead with the State Seal admonishing the board members to “Stand up to the left-wing mob…”

The board meeting didn’t seem to have much of a “socialist agenda.” It was about what policies and procedures might be implemented to encourage more students to take AP and IB classes, and to take concurrent enrollment at TCC and Tulsa Tech. Mr. Walters’ letter to school board members states: “I am demanding that you stop emphasizing woke policies over student achievement…so stop buying into the left-wing lies of being enlightened by guilt and fear. Stand up to the left-wing mob and start serving kids.”

I’ve never heard TCC or Tulsa Tech referred to as “woke.” Or AP, for that matter. I have heard some twitterings about IB classes being too “global.”

A handful of people had signed up to speak about LGTBQ inclusion training for board members. Those speakers are now relegated to the end of the meeting, whereas they used to be at the beginning.

I would agree with Mr. Walters, and I think most parents would agree (woke or not), that schools should emphasize learning. I believe most teachers are trying very hard to teach their students under often trying circumstances. Mr. Walters was at that school board meeting. He had to listen to the boring, dreary hours that board members spent talking about AP classes and how to improve student achievement. I’m not sure, but I think he left before any members of the “left-wing mob” spoke.

As I sat at the back of the room, I looked to the left where the “woke mob” sat. They were more of a rainbow coalition of confectionary pastel colors than an angry mob. They listened politely to over two hours of discussion about AP/IB and concurrent enrollment before they had a chance to speak. By then, many people, including Mr. Walters (I think), had left.

On the right side of the room sat the red, white and blue “patriots” who were there to defend a school board member against the “left-wing mob” that wanted to suggest that people involved in working with TPS students understand diversity and inclusion, including that of LGBTQ families.

I don’t know if Mr. Walters is aware that the TPS district is very diverse. The student body includes many races, nationalities, religious and ethnic populations. TPS also has many LGBTQ students as well as LGBTQ parents.

Here are a couple of additional facts from the survey:

In general, Oklahoma schools are not safe, inclusive environments for LGBTQ students. In light of that, GLSEN recommends that school leaders, education policymakers and others “implement supportive and inclusive school policies, such as comprehensive anti-bullying/harassment and supportive transgender and nonbinary student policies” and, among other things, “provide professional development for school staff on LGBTQ student issues.”

Certainly, anyone working with Oklahoma students would benefit from understanding the populations they serve. How could asking board members to understand LGBTQ students or parents be a bad thing? I don’t know why the “patriot” side of the room would have a problem with that.

Mr. Walters is a state officer. As Secretary of Education, he should be working for all students. Targeting a group of individuals is not helpful. It encourages division. It aims to negate or erase an entire group of students and parents. Not only is it hurtful and cruel to target LGBTQ students, but it’s also dangerous. When we “otherize” individuals, make them out to be evil or somehow less than human, we invite them to become targets of bullying, harassment, and even dangerous violence.

I couldn’t help wishing that I could shake up the room like a snow globe, mixing the two sides of the room to spend time listening to each other. Rather than targeting the “liberal mob,” maybe Mr. Walters could have taken some time to listen to what they had to say. After all, he represents them. They are citizens of the state. Maybe those who fear LGBTQ individuals would realize that their only agenda is the same as every other human. 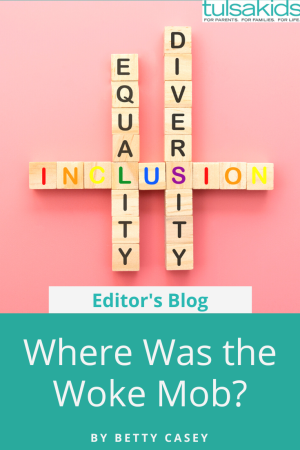