I started writing this blog on Halloween – hence the “scary” headline – but decided to leave it up because expanding charter schools can be scary for real public schools, especially those in underserved neighborhoods where the charters turn neighborhood schools into ghosts and gobble up the empty buildings left behind. Let’s look at KIPP Tulsa’s proposed expansion into the former Gilcrease building, which is about two miles from McLain High School.

According to a Tulsa World article, KIPP (Knowledge is Power Program) administrators have been quiet long enough and are going to convince the north Tulsa community that KIPP high school is a good choice for the vacant Gilcrease building.

In the article, Don Parker, interim executive director of KIPP Tulsa, expressed dismay that “anybody should have to get on a bus and go to the other side of the city” to “get a good college prep, high school education.”

I’m sure the families surrounding McLain feel the same way. Why has nothing been done about McLain? Why not make McLain, the neighborhood high school, a school that the community can be proud of? If school “choice” means the choice between a public school that the district has allowed to fail and a charter school chain, then is that really choice?

And, speaking of equity, the playing field should be fair and open to both public and charter schools. Chain Charter schools such as KIPP usually have the edge with private funding, and charter schools, even when doing poorly, rarely close. It’s almost always the public school that is punished with closure.

According to prwatch.org (Charter School Oversight, 2013), “the KIPP Foundation regularly spends nearly a half million dollars a year ($467,594 at last count) on advertising to convince the public how great its public charters are using figures it selects to promote. Almost no public school district in the nation has that kind of money to drop on ads promoting its successes.”

More for the same article in prwatch.org:

“Here are some of the key details from KIPP’s 2013 tax filings (uploaded below):

KIPP’s revenue and spending in 2014 were similar, but there are some additional interesting details (uploaded below):

In that tax year, which covers the 2013-2014 school year, as traditional public schools faced budget cuts across the country, KIPP spent more than $3.5 million on ‘lodging and hospitality,’ including more than $1.8 million alone at the posh Cosmopolitan Hotel and Casino in Las Vegas.

Since its revenue from taxpayers is commingled with its revenues from wealthy charter school advocates and the foundations they control, there is no way to sort out how much of taxpayer money has directly gone into luxurious trips for KIPP employees versus how much having revenue from taxes helps subsidize such largesse.”

Whether or not you like your tax dollars funding charter schools, it’s important to note that charter schools function as islands unto themselves with their own appointed boards, finances that aren’t necessarily open to public view, and their own superintendent.

In the National Education Policy Center’s (NEPC, University of Colorado) Charter School Research Report (you can find the entire document by going to the NEPC’s website), charter schools are fundamentally different from public schools, even though charters are funded by taxpayer dollars. For example, state and federal courts have found that charter schools may not be subject to the same open records laws as public schools. Moreover, “students attending privately governed entities are not guaranteed the same constitutional protections they would be guaranteed while attending state operated institutions.”

Constitutional rights of free speech, due process and freedom from unreasonable searches are maintained at public schools. Public school districts also post proposed and adopted budgets for the coming fiscal year, while charter schools can keep their financial information private. The 56-page report has too much information to include here. I encourage everyone who is interested in public education to read it.

KIPP’s teaching methods and discipline methods are controversial as well. Some have pointed out that they are overly harsh, harkening back to the mid-1800s rather than providing students what they need to succeed in this century. But parents and students do not necessarily have the democratic recourse to question these methods as they would in a public school.

The book “Work Hard, Be Hard: Journeys Through ‘No Excuses’ Teaching” by Jim Horn is referenced in the PR Watch article. The author writes:

Why does KIPP encourage and/or allow these practices? Horn writes, school leaders relayed that ‘because of cultural differences, black students are accustomed to being screamed at…because that’s how their parents speak to them.’ A KIPP teacher characterized the worst offender at her school as a ‘screamer, swearer and humiliator.’

“KIPP might also argue that they are the beneficiaries of widespread support in communities across the nation. It is very clear that KIPP benefits from powerful influential and wealthy supporters in government, the media, and foundations. Their no excuses approach to educating poor children has resonated with the elites in society and they have showered the corporate charter chain with resources for decades. So it may be surprising to some to read the counternarrative from KIPP teachers that is quite different than what you typically read in the newspapers, see in documentaries like Waiting for Superman, and generally experience in the public discourse. I proffer that the KIPP teachers’ counternarratives in Journeys should be required reading for all of KIPPs influential supporters.”

Such methods may, in fact, result in better test scores, but is it education? Are standardized test scores the best measure of a person, or even what a person has learned? Are these students learning to be the next leaders of our nation, or the workers who can blindly follow orders?

The north side has already suffered the loss of closing Gilcrease, creating potential overflowing classes at Monroe. Class size does matter, especially when teaching middle school-age kids, many of whom are on IEPs.

The KIPP administrators interviewed in the Tulsa World article compared KIPP test scores to surrounding schools, yet they didn’t say how many students were being compared. Or how many students at each school were on IEPs or how many were English language learners. How many students start at KIPP in 5th grade and how many of those same students are still attending KIPP? What is the attrition rate of lower performing students at KIPP? Comparing schools requires having all the information.

KIPP, as a charter school, can keep class sizes small. It can get rid of students at will. Where do those students go? Back to their public school. Public schools must take anyone who comes through the door, and they must, by law, provide for students with special needs. Do all charter schools follow the Individuals with Disabilities Education Act mandates?

Why not ask teachers, professors of education, school psychologists, therapists, literacy experts, trauma experts and other professionals in the community what McLain needs to be a world-class high school. I love Tulsa, and I love that Mayor Bynum talks about making Tulsa a world-class city. I want our schools to be world-class, too!

I agree with the KIPP administrators who say every kid should have an opportunity to attend a great school. So, let’s work to make every school great for our kids rather than draining already slim resources to a parallel charter school system. Public schools have always been underfunded. That’s not a reason to give up on our democracy and turn our schools over to the portfolio model where schools open and close depending on their test scores. We know that schools work better cooperatively, not in competition. There are many creative, caring, intelligent people in this city who can work to make every school world class. 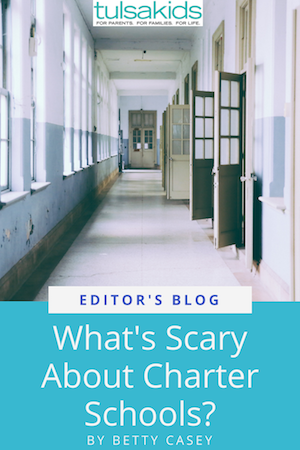