What to Watch While #SocialDistancing

Mf you’re like us, screen time rules are a bit loosey-goosey right now. I’m trying not to overdo it, but between Zoom meetings, GoNoodle, Facebook Live events and, of course, some afternoon TV, I’m also trying not to feel too guilty about it. Anyway, it seemed like a good time to remember that there are a lot of quality TV shows and movies out there for kids of all ages! I asked members of our Facebook group, TulsaParents, what shows they recommend. Here are some of their answers:

For the Younger Set

Archibald’s Next Big Thing (on Netflix)

Archibald’s Next Big Thing chronicles the adventures of a chicken, Archibald (voiced by Tony Hale), and his family and friends. The show is downright zany, with Archibald accidentally launching himself into space, to hanging out with his pen pal (only to put on a pair of too-tight ice skates that he can’t remove, ending in an emergency skate over a pool of nacho cheese, if I remember correctly)…to a live video game-style Karaoke contest. No matter what happens, Archibald is unflappable, going along with the flow and accepting each new adventure as it comes. If you’re just looking for a light-hearted escape, check out Archibald!

My friend Christi introduced us to Bluey, an Australian series about a Blue Heeler family (Mum, Dad, Bingo and Bluey). Bluey’s family plays imaginative games together. It’s a light-hearted, funny and creative. Best of all, the show has inspired Joss to bring the games Bluey plays to life! He’s turned our entire house into a hotel, played the “Magic Xylophone” game, etc. So if you want a show that will inspire your children to new kinds of play, this is a fantastic option.

If you have young kids, you probably know all about Daniel Tiger’s Neighborhood! This sweet show shares kid-friendly life lessons along with catchy songs. Plus, in season season 4, episode 1, Daniel Tiger visits his mom while she’s working. He wants to play with her but also needs to learn to use his own imagination to occupy himself while she’s busy. Definitely a lesson we need to explore over here!

Green Eggs and Ham (on Netflix)

Joss loved the new Green Eggs and Ham show! I was skeptical for some reason, but once I tried it (ironic!), it won me over. It’s heartwarming to watch Guy be similarly won over by Sam’s optimism. Guy isn’t just a “grumpy guy” afraid to try new things–he’s arguably depressed, a failed inventor who’s ready to give up on his dreams and literally make a living watching paint dry. It’s easy to see where he’s coming from, and rewarding to watch him learn to hope and trust again! Plus, there are a lot of narrative surprises–you never know exactly where this story is going!

If You Give a Mouse a Cookie (on Amazon Prime)

Based on the popular books by Laura Numeroff, Amazon Prime’s “If You Give a Mouse a Cookie” follows friends Oliver, Mouse, Piggie, Moose, Cat and Dog! The adventures are fairly low-stress: floating recycled boats down a river, throwing a surprise party, etc. So it’s a nice choice if you need a calmer show.

I haven’t really introduced Joss to Mr. Roger’s Neighborhood yet, but what a wonderful time this would be to do so. (I did write Mr. Rogers letters as a child–and he responded!) Mr. Rogers teaches children about kindness and other important character qualities while also teaching them about everyday things like how to make crayons.

Sarah and Duck (on Amazon Prime)

Sarah and Duck is the epitome of a relaxing kids show that parents might grow to love, too. Sarah and her best friend, Duck, go on adventures in their impossibly charming British village. Their friends include an absent-minded librarian, a very slow tortoise, Cake, Umbrella, Rainbow, etc. Sarah loves drinking lemon water, baking, and talking to the shallots in her garden. It’s so delightful. You have to purchase it on Amazon Prime now, but it’s worth it! At age 5, Joss has sadly grown out of Sarah and Duck a bit–he still enjoys it, but it’s not top-of-mind anymore.

Joss LOVES Storybots, and he’s learned a lot through it! The gist of this show is that a child asks a question (for example, Where does chocolate come from? How do you make music?), and the Storybots go searching for the answer. Storybots are small, colorful beings who live “inside computer parts.” Joss’s current favorite episode is the one about how music is made. This one has taught him words like “timbre,” “intensity,” “harmony” and “rhythm.” And it’s so much fun to hear him drop these into conversation.

Joss’s class at school has also been discussing questions. What are the question words? What is a question you have about _______? So this is a perfect dovetail to that, encouraging curiosity about the world.

This recommendation comes from TulsaParent Jen H., who writes, “My son and I like watching The Wild Thornberrys. Teaches him about animals and about different cultures around the world. And who doesn’t wish they could talk to animals?” Joss and I haven’t watched this yet, but I’ll add it to the list! (He does enjoy the Wild Kratts, which is another option for wildlife-loving kids!)

Shows Older Kids Will Enjoy, Too

A Series of Unfortunate Events (on Netflix)

TulsaKids blogger Kristi Roe Owen (read her post on “Our Top 10 Kid-Safe Adult-Friendly Shows” here for more great suggestions!) says her children love science-fiction and fantasy shows. In particular, she recommends “A Series of Unfortunate Events” and “His Dark Materials” because they are visually stunning and told from the perspective of children.

I had to throw this in because this is a show I’m excited to binge with Joss someday. It’s totally on the cheesy side at times – other times, it makes me cry! – but it’s also a great way to teach kids something about the Arthurian legends! And Colin Morgan is fantastic, of course.

Watership Down (on Netflix)

Our family started this, but didn’t finish it. Nevertheless, I think I can recommend it with reasonable confidence. It’s a BBC adaptation of Richard Adams’ famous novel about a group of rabbits in search of a new home. Although it’s a show about bunnies, don’t expect fluffy, fun content. The rabbits face genuine hardships and tragedy, so be aware of that.

TulsaParent Alicia K. says even her younger children enjoy the Marvel movies (despite a mild swear word here and there), and she is also looking forward to introducing them to Jane Austen films and Little Women adaptations. I second her vote for the new Emma. movie. I was lucky enough to see it at Circle Cinema a week or so before we all needed to stay home and am looking forward to purchasing it when available. You can rent it now, but it’s on the pricey side. And be warned: there’s a bare backside towards the beginning, but it’s brief. But I love the idea of watching some Jane Austen and similar classics with your kids as a nice complement to their remote learning!

Of course, if you have Disney+, you can also watch the new Pixar movie, “Onward,” which we love. Joss is determined that I order him a “real wizard’s staff” online. But other than setting unrealistic expectations about magic, I highly recommend it.

What TV shows are your kids watching lately – that you enjoy as well? Leave a comment to let us know! 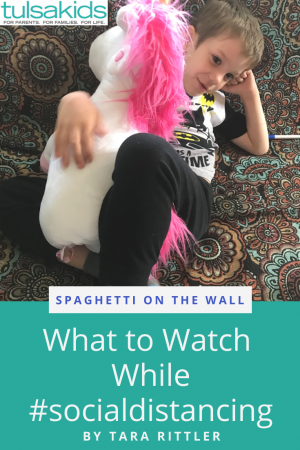