What I Learned Hiking the Grand Canyon Rim to Rim 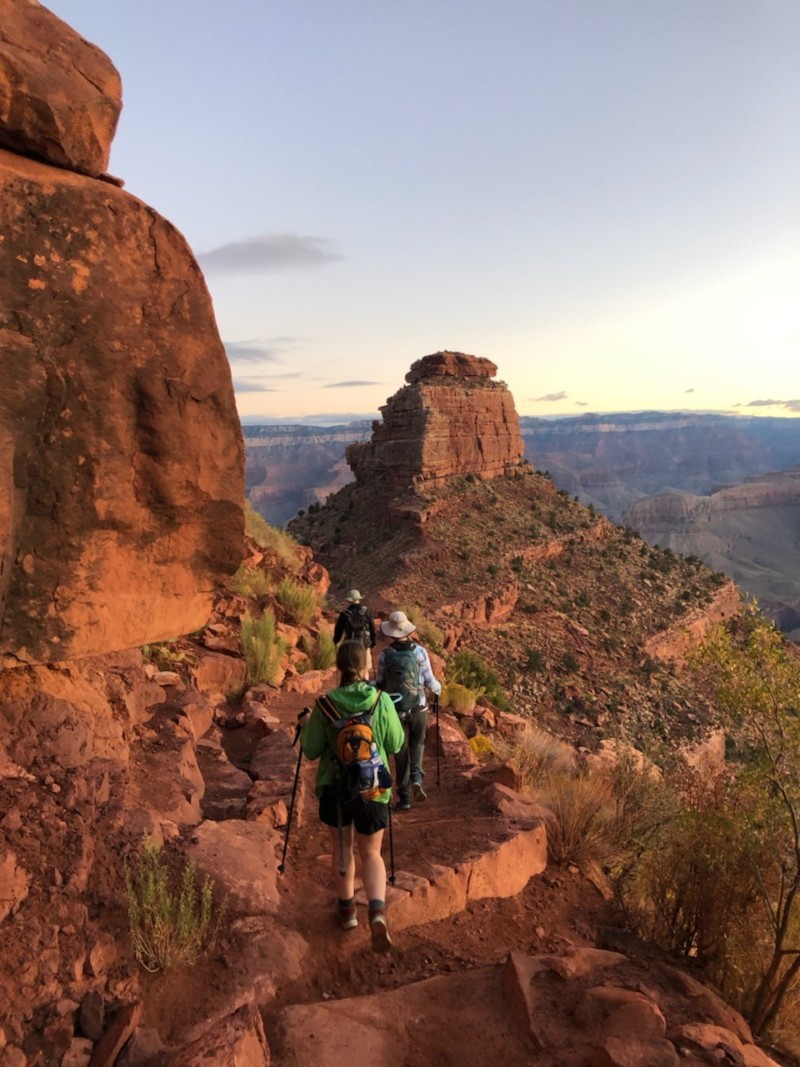 Last Friday, I had the pleasure/pain experience of hiking the approximately 22 miles (depends on the trails you take, etc.) rim-to-rim at the Grand Canyon with 16 friends and acquaintances, my husband and my daughter Anna. (WARNING: Cliches ahead)

This was my first attempt. Many of the people in our group had done it a few times, but there was a wide range of experience. My husband has hiked rim-to-rim once before, but he is so understated in his description of things that I got the impression (wrongly) that the trek wouldn’t be difficult. Sometimes a little naiveté is a good thing.

First, if you’re thinking of hiking rim-to-rim in a day, read this article by Alex Hutchinson about a study that researchers from the University of New Mexico and the park staff conducted to determine why there were so many distress calls from hikers on peak weekends “that every paramedic ranger in the national park has to be called into action.”

You can read the stats about water and distance and elevation and fatigue in that article.

Here are some things I learned from my hike.

I assumed that since I’m a runner (over 40 years) and I do yoga that this hike would be akin to walking all day. I thought, “I can do that.” That misconception was reinforced when I talked to a woman on the shuttle who appeared to be between 75 and 80 years old. She was small, muscular and nut brown with short grey hair and a lilting, soft voice. I asked her if she was going to hike, and she told me that she had done rim to rim (not for the first time) the day before – in 10 hours! Alone! “I couldn’t find anyone to go with me,” she said.

Naturally, I thought if this woman could race through the canyon in 10 hours, it couldn’t be that difficult. I was wrong. The hike is not a pretty stroll through a park. It’s rugged, very steep (both up and down), cold, then hot and then scary (more on that later). Going down, my legs were shaking, and, even though I was on the first third of the hike, my legs already felt like two noodles. My balance was off, causing me to sit back a couple of times, my poles in the air, leaning on my backpack against the trail. The path was so steep that I didn’t even fall backwards.

Sometimes you can think that you’re prepared, you can plan, and you can assume you know what will happen, but life will always throw a wrench in the gears. That’s the thing to be prepared for – the unexpected, the change, the difficulty. Because it will happen. The thing about hiking the canyon is that you have no choice but to keep moving forward.

Learn to Live with Your Pain

The forward, downward thrusting of my feet badly bruised a toe on one foot and turned a little toe on the other foot into a massive, bloody blister. Needless to say, my toes hurt the rest of the way, and I wondered if I would be able to make it (yes, I DID break in my boots – I just didn’t walk for miles down any vertical slopes before I went). Again, you don’t really have a choice but to keep moving. I focused on other things – the scenery, the other people I met (like the old man who said, “I’ve counted 14 types of flowers. You can see them if you just look.” Was he a nature phantom? I don’t know), the distance to a water stop, my yoga breathing…whatever.

Once I traded backpacks with my daughter and, much later, started the ascent, things got more tolerable. Going up relieved the pressure on my toes – climbing to heights can be easier than descending.

I thought about how being human means feeling pain, physical and emotional. It’s inescapable. Like my toes. How do we move forward? Sometimes it really, really hurts, but there are people and experiences along the way that will help you continue, even if you have to limp a little for a while.

One aspect of the hike that I was (stupidly) not prepared for was the long, narrow path carved out of the side of the cliff that dropped straight down into the abyss. A misstep or a trip on a rock would send a hiker to certain death. My daughter and I are both afraid of heights. I was terrified. We couldn’t look down, even though I’m sure the view was amazing. We could see the treacherous, curving path in front of us going on for what seemed like miles, and we knew we just had to keep going. I was worried about her and my husband. They were both behind me. I know they were worried about me and my earlier wobbliness.

I don’t know why no one told me about the dizzying height. I guess it was actually better that I didn’t know because I’m not sure I would have attempted the hike had I known about that particular part of the trail. It’s the reason that I wouldn’t be able to do it again. I have no desire to walk along a narrow ledge with that kind of drop-off right next to me. Needless to say, I forgot my pounding toes and rushed over that section of the trail.

Sometimes facing fears can help you get over them. That was not the case with me. But, hey, I have a healthy respect for the precariousness of high places and deep water and risky endeavors. I don’t need to get my adrenaline pumping in that way. My worries lean more to the psychological and existential fears about my children’s safety and whether or not my dogs are doing ok when I board them at the vet or, sadly, whether climate change is going to destroy the planet.

I was happy to know that I am not paralyzed by fear, but can reason myself through it and get beyond it.

After 12 hours, I got to the trailhead on the North Rim and quickly made some friends with people who could give me, my daughter and husband a ride back to the Grand Canyon Lodge, which was two miles away. I was done. I don’t remember feeling exhilarated or even feeling much of a sense of accomplishment. I felt small.

Pushed up against the wall of that canyon with the abyss on the other side made me realize how truly insignificant I am. The canyon was bigger and stronger than any one of us. We are mere ant-like creatures clinging to a precarious path that is often beautiful, but also terrifying and difficult.

But, it helped to be with others along the way, whether to share in their expertise or in our awe of the canyon or the pain of our blistered feet. 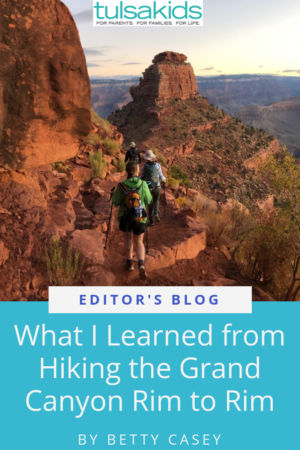