What Do Your Parents Do for You? 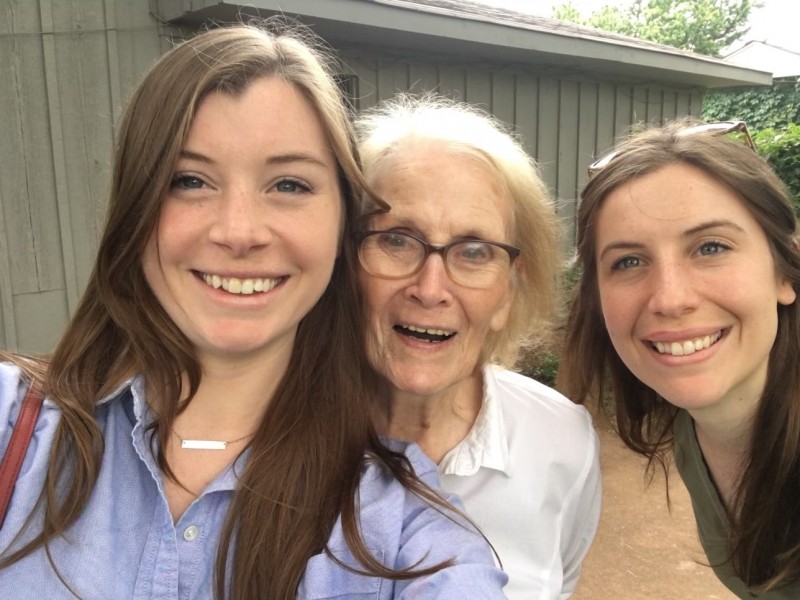 Betty Casey’s daughters, Mary and Anna, with her mother

Last week I was at my mom’s house visiting her for the day. Having grown up on a farm in Southeastern Oklahoma, my mom enjoys the outdoors. She and my dad (who grew up on an apple orchard at the foothills of the Rockies in Colorado) built a house that has a lot of windows. The large backyard ends at a big gully that stretches to the railroad tracks that run through the middle of Stillwater. Owning all of that land gave my parents a view of nature rather than surrounding houses. No one could ever build behind them. Over the years, the gully (also known as “the hole,” a free-range playground for the neighborhood kids), has become overgrown with cedars and sumac. Without my dad’s garden and the constant tramp of kids running through it, deer, foxes, raccoons and other animals now use it as a home and haven from the surrounding town. They often come up over the lip of the hole into my mom’s yard, partly encouraged by the scraps of food that she throws out because she can’t bring herself to waste anything. In response to my wanting to throw away some pile of peelings or breadcrusts waiting in the kitchen, she says, “Something will eat it,” so I take it out to the edge of the hole for her.

My mom and I talk a lot about the animals and birds in her yard. She also likes to talk about the clouds moving across the sky, the airplanes she sees, the redbuds that have come up “volunteer” and the cats that my sister feeds lying around in the sun on the patio. These are the conversations we have because her memory is fading.

On the way home that day, I listened to a story on NPR about what immigrant children’s parents do for them when they come back home as adults, such as making special foods. The woman being interviewed is a comedienne and a lot of her material comes from her family, especially her somewhat stoic father. The show host segued into asking listeners to share what they loved about going home as adults. Some listeners shared the joy of taking garbage bags of laundry home during holiday breaks to have their moms do it. (I’ve done this and so have my kids). Another talked about the pleasure of having an apple cut up and put on a plate. I do this for my kids (and often add peanut butter or cheese).

Food is a big thing in our family. My mom was a great cook, but at 93 doesn’t cook anymore. I enjoy doing that for her now. When my kids come home, I always ask them what they want to eat – even if our Thanksgiving or Christmas dinner turns into an odd assortment of their favorite side dishes. I don’t care. I’ll happily cook anything.

Over the years, we’ve gathered in Dallas after Christmas for the “Casey Family Christmas” because my husband’s three brothers, their families, my son and now-adult nieces and nephews live in Texas. Because of Covid, we couldn’t gather last year, but now that we’re all vaccinated, we’re getting together. The brother who is hosting sent out an email to ask what food people might bring. On the list were foods that had become traditions over the years, one of which was made by my now-deceased mother-in-law that one of the kids had named “green slime.” It is a pistachio pudding dessert with marshmallows and probably a good dose of Cool Whip. In honor of her grandmother, one of the nieces makes it every year and, of course, it is on the list this year once again.

Going home for me, whether it was as a young adult or later after I was married with kids, felt like letting out a breath. I knew my parents would love taking care of the kids, giving me time to relax. I knew my mom would make delicious food and then pile on the leftovers when it was time to go. 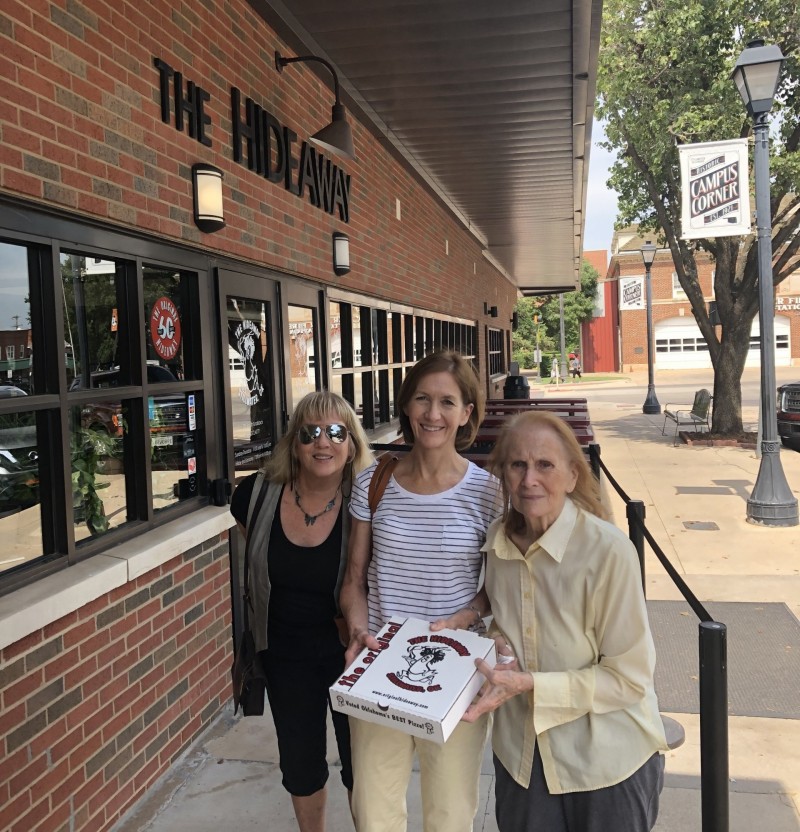 Betty Casey with her mom and sister in Stillwater

Now when I visit my mom, she still tries to give me something when I leave. Since she doesn’t cook or shop, she doesn’t have leftovers or special foods to tuck into a paper bag. If we get a Hideaway pizza, she tries to make me take the extra slices. Desperate to make sure I don’t leave empty-handed, she opens drawers and the refrigerator to come up with something. Do I need bread? What about oranges? Scooping up a handful of change from a bowl on the table, she tries to give me money “for the toll.” Maybe some cold French fries that I can heat up later? Unable to find anything I wanted to take last week, she took some of those little boxes of raisins that you put in kids’ lunchboxes out of a cabinet and tried to give them to me. I hate raisins. I took the change instead.

What do you look forward to when visiting your childhood homes? Share your family traditions, something your parents always do, big and small. I know my kids love that I cut up an apple for them and put it on a plate. It tastes so much sweeter that way. 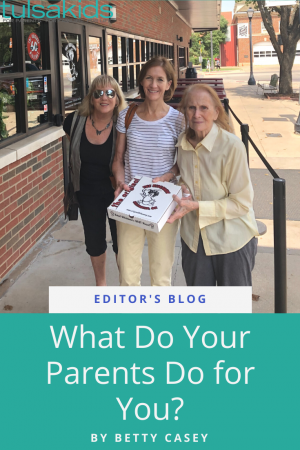