I tried to leave a comment on Nehemiah Frank’s editorial entitled “Diverse Group of Parents Launches National Parents Union to Challenge Educational Injustices” in the Black Wall Street Times, but was unable to do so. I feel that Frank’s editorial about the National Parents Union (NPU) was misleading. I received the press release (the same one that Mr. Frank probably received) about the NPU marching through the streets of New Orleans to celebrate “school choice.” I did a little digging about the NPU and found that it is far from the diverse, grassroots organization that it claims in the press release. The National Parents Union is funded by white billionaires, most notably the Walton Family Foundation. (See also:  https://gadflyonthewallblog.com/2020/01/16/astroturf-alert-national-parents-union-is-thinly-veiled-union-busting-backed-by-billionaire-cash/)

“The greatest failure among the mainstream media is the inability of journalists to recognize and then address that their narrative about ‘reformers v. anti-reformers’ is a straw man argument and that the real battle is between those seeking reform built on the research base (researchers and educators consistently marginalized and demonized) and the rich and powerful without credibility committed to accountability, standards, and high-stakes testing as a mask for market ideologies—despite three decades of research showing that has not worked.”

The reformers of the New Orleans schools and the NPU are part of the rich and powerful that Mr. Thomas refers to in his piece. No Child Left Behind, Race to the Top, Common Core, charters and philanthro-capitalist innovations have all failed America’s children. I believe that we have a moral obligation to invest in all children (and in all schools, not just a handful) by using public dollars to support what research tells us actually does work. And, like Mr. Frank, I also think that racial injustices exist in public education; however, we disagree on how change should happen. It won’t happen with charter schools that do no better than public schools. And it shouldn’t start with test scores (standardized tests and norm-referenced tests, while useful in a very narrow sense, are terrible measures of learning. Even Bill Gates admits that his MAP test, another “reform” foisted on school districts that accepted it, doesn’t work), closing neighborhood schools (to be replaced with charter schools that do no better and drain money from public schools), and using one-size-fits-all scripted curricula and outcomes-based education, which was thrown on the education scrapheap back in the ‘60s!

Those things that DO work include small class sizes, adequate teacher pay, credentialed teachers, teacher support and autonomy to write tests and curriculum, decent facilities, extended days for those who need it as well as counseling, ELL, special education and reading specialists. In other words, reform that works for kids, not against them.

David Brooks, conservative opinion columnist for the New York Times, wrote an excellent editorial today, entitled “This Is How Scandinavia Got Great.” He says greatness happened primarily because of the Nordic commitment to education. I don’t know if Mr. Brooks supports the current corporate/business practice reform that is happening in public education today, but his article about Scandinavia actually describes American public education in its beginnings and prior to 1983 when Ronald Reagan perpetuated the myth that public schools were failing (they weren’t); it continued with the high-stakes testing debacle of No Child Left Behind under former President Bush; and was exacerbated by former President Obama’s Race to the Top, which pitted schools against one another for funding that they all so desperately needed. It continues today with the current business practices of creating cruel and punitive competition among schools as they fight it out to stay open based on test scores that reflect poverty more than potential.

“Today, Americans often think of schooling as the transmission of specialized skill sets — can the student read, do math, recite the facts of biology. Bildung is devised to change the way students see the world. It is devised to help them understand complex systems and see the relations between things — between self and society, between a community of relationships in a family and a town.

As Lene Rachel Andersen and Tomas Bjorkman put it in their book “The Nordic Secret,” ‘Bildung is the way that the individual matures and takes upon him or herself ever bigger personal responsibility towards family, friends, fellow citizens, society, humanity, our globe, and the global heritage of our species, while enjoying ever bigger personal, moral and existential freedoms.’”

That is the vision that the United States is missing today in the corporate and philanthro-capitalism take-over of public education. He is describing a common good, the neighborhood school, the understanding of what it means to be a citizen. This was the foundation of American public education in a democratic society before “reform” set it off on a money-strewn track to privatization.

“Reform” as it is currently happening at Tulsa Public Schools is not based in real research and has not worked well in other cities. Scripted teaching, MAP testing, “Teaching Like a Champion,” Teach for America, portfolio districts, disruption, high-paid consultants, overly strict, scripted discipline methods such as No Nonsense Nurturer are all “reforms” that are not good for kids. We must use practices and curriculum based in real research, not “research” funded by the very companies and philanthropists that are trying to implement it in our public schools. We must listen to professional educators, child development specialists and administrators with degrees from accredited universities. (Although the Broad Foundation recently “bought” a Broad Center at Yale for $100 million to legitimize its next generation of Broad education leaders.)

It is especially ironic that the National Parents Union march for “choice” was through the streets of New Orleans, a city that has decimated its public schools to be replaced by charters supported by wealthy philanthropists and taught by non-certified TFA interns. There really is no choice. After more than 10 years of “reform,” we can look to New Orleans as an example of what NOT to do regarding reform. Black students and those living in poverty have been left behind in the New Orleans system. They are still marginalized. The same problems that existed prior to Hurricane Katrina still exist, only in a different, less democratic system.

One of the most recent problems in New Orleans was the grade-fixing fiasco at Kennedy High School. (New Beginnings Schools Foundation). Forty-nine percent of seniors didn’t have the necessary credits or test scores to graduate. This led to an audit of all New Orleans’ high schools’ records.

The decentralized enrollment system, the one that TPS has gone to this year, contributed to the shoddy record keeping in New Orleans.

Here are some of the findings from that audit:

…Six of the eight schools were missing students’ standardized or end-of-course test scores, and five of eight didn’t have records showing all the credits students had earned so far. Several were also out of compliance with special education policies.

During several audits, including one at King, officials said they had problems getting students’ records when they transferred in from other schools.

In the Orleans district’s decentralized system, families can transfer students from one school to another when seats are available, and records don’t always follow students as seamlessly as they are supposed to. Different schools can also offer classes during different years, making credits harder to keep track of.

As public education activist Steven Singer writes, “Neighborhoods were destroyed more by the redistricting than the natural disaster, many poor and minority families and teachers were forced out, and those left behind were forced to subsist on low quality schools obsessed with test prep and zero tolerance discipline policies. THIS is where NPU (National Parents Union) expects to trumpet the same policies that have devastated the Big Easy.”

Singer, by the way, is not funded by white billionaires as is the National Parents Union.

And, Singer provides some background on one of the leading faces of NPU, Shavar Jeffries:

“And don’t forget Shavar Jeffries, the president of Democrats for Education Reform (DFER) – a right wing school privatization lobbying firm that pretends to represent progressives. DFER is notorious for laundering billionaire cash and trying to make its initiatives look like they come from the grass roots. The organization is bankrolled by Rupert Murdoch and other conservative billionaires. It’s so antithetical to the Democratic Party platform that the California and Colorado Democratic State Assemblies voted to demand DFER remove “Democrat” from its name.”

The “diverse” individuals that Mr. Frank praises in his editorial are, in fact, all backed by the Walton Family Foundation to the tune of over $5 million for the 2018 fiscal year. Other billionaires who have an interest in maintaining the current unequal economic status quo are also major donors. The National Parents Union is hardly a “grassroots” organization.

I’m not writing to suggest that Mr. Frank change his mind, but I wanted to provide a little more context to the conversation. We could all do a better job of being more informed about history and the historical context of public education. If you support the corporate reform takeover of public education, you have the right to that opinion, but at least understand it and be transparent about it. Don’t pretend that it is actually a grassroots movement rather than a billionaire-funded grab to remake schools in their own image. Don’t pretend that it is democratic. Call it what it is — a corporate take-over to privatize public education to maintain the economic status quo. 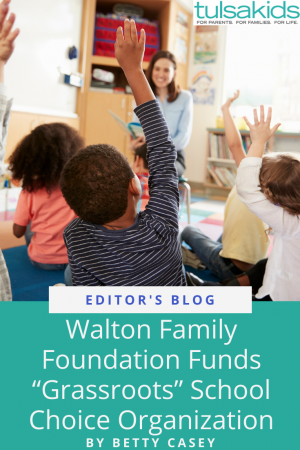