A Powerful Reminder with a Powerful Message

During my visit to the Oklahoma City National Memorial Museum this month, it became apparent why millions of people from near and far have taken time to visit the site since its opening more than 20 years ago.  Simply put, visitors make the trip to remember the tragedy and to leave with resolve.

The combination of an indoor museum and an outdoor memorial leaves a lasting impression, reminding us that a violent act like the Oklahoma City Alfred P. Murrah Federal Building bombing on April 19, 1995, although tragic, actually brought people together, strengthening and uniting their bonds and making heroes out of ordinary people. More than 300 buildings were either damaged or destroyed, and rather than running from the horror, people from all over the county rushed in with arms wide open. The incident accomplished the opposite of what the attackers, Timothy McVeigh and co-conspirator, Terry Nichols, had in mind.

During the 20-year anniversary of the bombing, when prompted about the resiliency and growth in Oklahoma City since the attack, former governor Frank Keating said, “I just think people are so enamored with the story of this city. We wish all of those wonderful people were still here, but hopefully, out of evil, good comes and bad things make good people respond, and we certainly responded.” The remarkable heroism became known as the “Oklahoma Standard.”

Today, the museum and memorial have impressive upgrades, thanks to a $10 million injection in 2015, bringing more meaningful and extensive artifacts and a host of interactive, touchscreen displays to educate guests.

The Museum: A Window Into History

Inside the museum, a 10-chapter, self-guided tour awaits you. The first section is an overview in the Orientation Theater and the tenth chapter ends with The Memorial Overlook, a glass-windowed wall facing the outdoor memorial with its manicured green space and downtown city skyline as its backdrop. Each chapter walks you through the moments leading up to the terror attack, the events that unfolded throughout the day and weeks to follow, the trial and sentencing of the terrorists, plus  moving stories of those whose lives were taken and tales of those who dashed in to help with rescue and healing efforts.

What I found most impressive about the entire exhibit is how it is broken down in to bite-size, digestible pieces, serving up just the right amount of information at every station.  The tour is well coordinated and balances information and time in a near perfect way.  Events of the heartbreaking day are brought to life starting with a chilling audio recording of the actual bombing and then unfold while viewing detailed dioramas, videos and many relics including the infamous getaway car that Timothy McVeigh unsuccessfully used (Note: He was pulled over and arrested within hours of fleeing the scene). 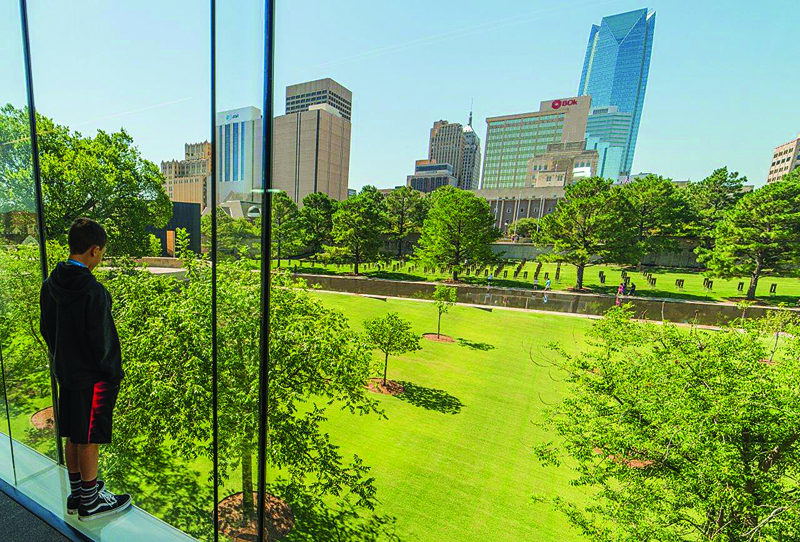 The outdoor memorial is a sacred sanctuary for peaceful reflection. As a way to help people understand the mass casualties that occurred that day, the memorial grounds contain two opposing gateways called “The Gates of Time,” representing the minute before and the minute after the bombing. Between the gates lie a serene reflecting pool between the gates, a green space known as The Field of Empty Chairs, representing each person who died and, finally, trees, including the nearly 100-year-old solitary elm that survived the bombing.  The emotional elm is surrounded by the Rescuer’s Orchard, full of trees that serve to protect it. There are several more notable exhibits, including the Survivor Wall, which as the only remaining wall of the original  Murrah Building is home to the more than 600 names of those who survived the bombing.

Younger children may want to examine The Fence where visitors leave memorable items such as teddy bears and love notes. The Children’s Plaza is especially engaging for the little ones, for it is designed to teach them about the event by emphasizing how even children can participate in the help and healing process. Included is an artistic wall, constructed from hand-painted tiles that display loving thoughts, prayers and messages sent from kids all over the world. To enable visiting children to express themselves and write down their own special reflections, there are multiple chalkboards embedded in the ground with various colored chalks to choose from.

For arguably the best experience, take the indoor museum’s  self-guided tour first, followed by a leisurely stroll through each of the distinct areas of the outdoor memorial. Allow two to three hours to soak in all that is offered here. The outdoor space is lit up at night and many suggest taking time to see it then, too.

Located in the heart of downtown Oklahoma City on Northwest 6th and Harvey Avenue, the Outdoor Memorial is free to all who visit and is open 24 hours a day, 365 days a year.  The museum is open Monday through Saturday from 9-6 p.m. and Sunday from noon to 6 p.m. For your convenience, tickets can be bought the day of your visit or in advance online. Adults are $15, students who are 6 and older (with ID), Military (with ID) and seniors are $12, and those 5 and younger are free of charge.

For more information, check out www.memorialmuseum.com.  And, read about the annual marathon that welcomes kids’ participation each year.