NOTE: I sometimes use this blog space to publish letters to the editor or community voices that may be of interest to Tulsa area parents. This editorial is by Darryl Bright, a long-time public school advocate and activist. – Betty Casey

During the Tulsa Public School Board meeting Monday July 6, 2020, the board elections were being held for president and vice-president of the school board. Dr. Jerry Griffin, a newly elected board member, nominated Ms. Jennettie Marshall for the board vice-president position. Mr. John Croisant seconded the nomination.

The newly elected president, Mrs. Stacey Woolley, opened the floor for comments. Dr. Griffin gave a glowing statement about why Ms. Marshall was well suited for the vice-president position. After his endorsement, there was a pause for further comments. Hearing no comments, the president called for the vote. Before she finished saying “vote,” board member Suzanne Schreiber asked to make a comment. She began her comments by calling out Ms. Marshall about not responding to her reaching out to talk about “filling gaps” Ms. Marshall had with her. Ms. Schreiber recounted “allegations” made by Ms. Marshall that questioned the board’s integrity. Furthermore, she declared Ms. Marshall’s statements about the board as untrustworthy, untruthful and lacking transparency; therefore, she could not support the nomination.

Following that assault, Past-President Keller followed by saying that she had concerns “in the same vein” as Ms. Schreiber had expressed. She continued by putting forth a detailed endorsement of Ms. Jania Wester for vice-president. She ended her comments by stating that she could not support Ms. Marshall’s nomination.

Board Member Wester said that she had respect for Ms. Marshall, and touted the fact that she brings a lot of questions and concerns to board meetings, but from what she has heard from her constituency, she was unable to support the nomination.

Newly elected board member, John Croisant, stated that Ms. Marshall was an “unbelievable person who sticks to her integrity and beliefs.” He received comments from his constituency that the board must work together.

The voting results were the following: Ms. Marshall lost, three “yes” votes to four “no” votes. Mr. Croisant, who seconded the nomination of Ms. Marshall to be a candidate, voted “no.” How is that possible?

Ms. Marshall was elected by her constituency to challenge the status quo and the structural racism within the TPS educational system. Furthermore, she was elected to fight for resources needed for our children and their schools to master the Oklahoma State Standards. Her election made it clear that her constituency wants her to speak truth to power to Superintendent Gist for equity and excellence for their children and their schools. Additionally, the community wants her to be a voice for change on the board and to fight against the marginalization of our children. The TPS Board and superintendent see her righteous indignation and moral outrage as being disruptive—what we hear and see from Ms. Marshall is a conscientious and natural response to the intolerable educational conditions faced by our children, families, and our communities across this district.

The assault in that meeting was not only about Ms. Marshall’s vice-president nomination, it was in fact a public character assassination meant to “expose her unfitness” to be a board member/a team player. The board for generations has maintained the status quo and has been for decades fertile ground for structural racism. The vice-president nomination is only a snapshot, but it is indicative of how our African American families as well as their children and our community have suffered under the TPS system. Ms. Schreiber’s statement about the “allegations” that Ms. Marshall directed toward the board are on-point. Those “allegations” have been our reality for generations. This reality voiced by Ms. Marshall and condemned by Ms. Schreiber is the precise experience lived by our community. Our students, families and education activists have voiced opposition to that reality at numerous TPS community meetings and school board meetings. Dr. Gist and the board’s responses have been to stay silent, to marginalize Ms. Marshall’s valid concerns and questions as she fights for the well-being of all children in the district. Rather than respond to Ms. Marshall’s concerns, they have served up a mind-numbing amount of “new” programs, consultants, colorblind solutions, staff changes, and meetings that have not improved teaching and learning for our north Tulsa schools and specifically for our African American children.

What occurred at Monday’s board meeting mirrored the treatment and responses given to our community for generations—this is but one example of TPS’s systemic/structural racism. In addition, there is TPS’s disfranchisement of our community and the mis-education of our children. The board and Dr. Gist listen only to those who play by the system’s outdated norms, “rules” and values. Both have set up “rabbit holes” and smoke and mirror reports and solutions to maintain this system at all costs. When they shut out Ms. Marshall, they shut out and disfranchise her constituents who desire and demand systemic improvements and the eradication of structural racism embedded in TPS.

During this character assassination session, there was a fear of an overdue power shift and a dawning of a strategic shift in direction for the school board if Ms. Marshall was elected vice-president. She lost by only one vote.

As a community, we must take action to stop character assassinations and/or verbal assaults meant to imbue the integrity, moral actions and statements made by Ms. Marshall. We must expose these attacks for what they are and for what they are intended to do. Those attacks are to discredit her, and they are attempts to put in her in “place.” These actions are intended to manipulate the public’s perception and narrative that everything is great on the school board with the exception of Ms. Marshall—this is a deflection. What is the strategic intent of all of the verbal assault? The mission is to remain in power, and to control the board of education and every aspect of the TPS system in order to preserve the status quo, which is not working for all children.

There is more to come!

Advocating for public education since 1987 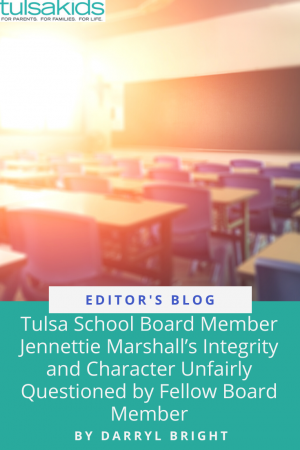