Thanks to working for TulsaKids, I feel like Joss and I get out and about a good amount. But I’m definitely a homebody at heart who doesn’t mind a little routine! Sometimes, it takes me months (years?) of thinking, “I’d like to do that,” before actually giving something a try. So I am happy to say that in the past couple of weeks, I’ve checked off three bucket list items!

I’m not a great artist, but I’ve been trying to paint portraits over the past several months. It’s relaxing. And I’ve even got some new art for my walls! It’s…fairly inferior fan art, but still…

But I don’t know any real painting techniques. So I was excited when I finally remembered to pre-register for TCCL’s monthly “Mistakes to Masterpieces” paint-along event! It’s on Zoom, and I had watercolor and paints, so didn’t need to do any prep other than clean off our coffee table.

Joss joined me for the Thursday evening class. We logged onto Zoom, and the painting began!

The instructor did a great job. It was a relaxed pace, which I appreciated, being a beginner. Although, being someone who also likes to get things done quickly, I was probably not as relaxed as I should have been 🙂 Also, despite reminding Joss many times throughout his life that mistakes are inevitable and fine, I…don’t like making mistakes. It’s too easy to compare one’s own painting to a superior one and see nothing but the flaws. In short…I got very grumpy midway through! 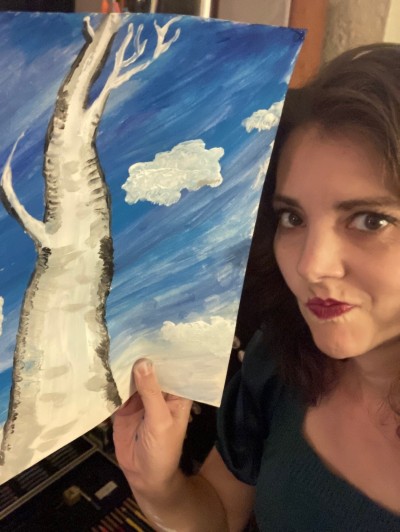 Joss, on the other hand, was incredibly proud of his blue tree (and purple cloud!). I told him paintings are more interesting when they’re not exactly like one another. So of course, when he saw me trying to reproduce the instructor’s picture as closely as possible, he reminded me that his painting was superior. 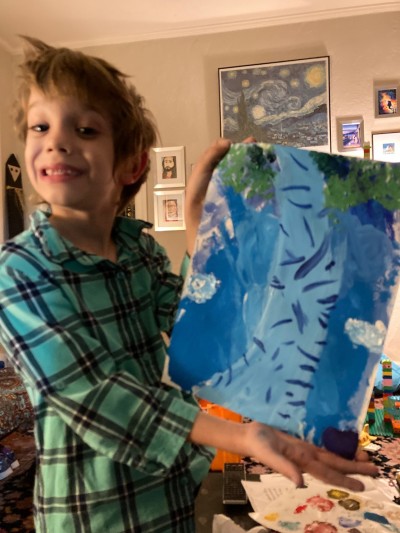 We had to quit the class early to attend another event. So I finished my picture the next day. And do you know what? I like it just fine! No, it’s not perfect. But I did learn some new techniques and branched out (get it?) into painting something besides faces. 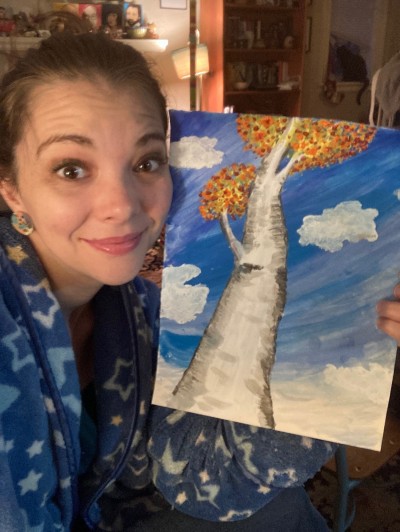 I live in this robe in the winter…

The next Mistakes to Masterpieces event is December 16 from 5-6:30 p.m. Pre-register at events.tulsalibrary.org/event/5672175.

I’ve wanted to sign Joss up for martial arts since probably pre-pandemic. His only scheduled after-school activity this year has been swimming lessons, which meets twice a week. However, our YWCA isn’t offering lessons in November and December, so this seemed like a good chance to try something new. Midtown Martial Arts offers a free trial class, so we signed up for that. 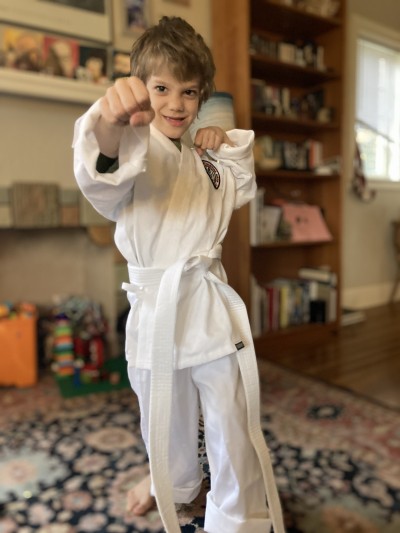 It was SO fun to see him in his uniform, punching, kicking and…falling to the ground. He was clearly having a blast. And at just $99 per month, enrollment seemed pretty reasonable. So we went ahead and signed up! I’m hoping he gains some confidence and gets a little more practice at following instructions. Plus, it’s nice and active, so that can’t hurt, especially during the winter months.

For his second class, his teacher warned him that falling down would lead straight to “Push-up City.” He also talked about the importance of focus and had the kids stand quiet and still for a full minute. So, that was pretty exciting! 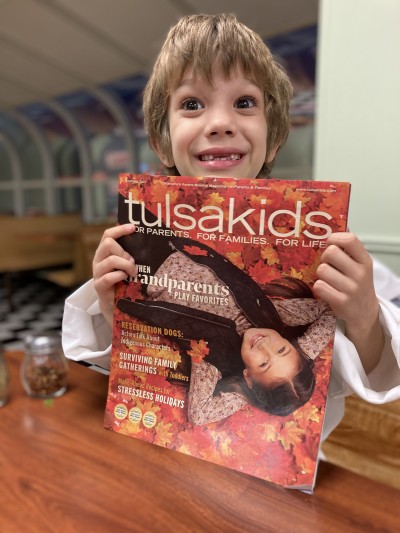 Afterwards, we went around the corner to pick up dinner at Umberto’s, and look what we found! 😉 If you’re ever looking for a copy of TulsaKids Magazine, just go to tulsakids.com/find for a list of distribution locations. 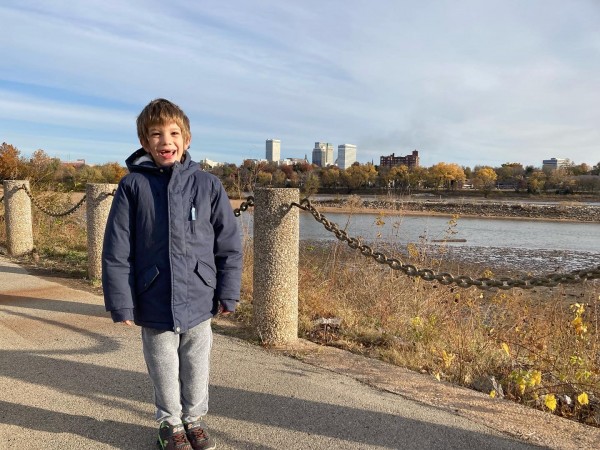 Honestly, I doubt we even walked a mile. But Joss ended up having a good time once he realized he could swing on these giant chains along the trail. At that point, I had to encourage him to hurry along for an entirely different reason than mere feet-dragging. 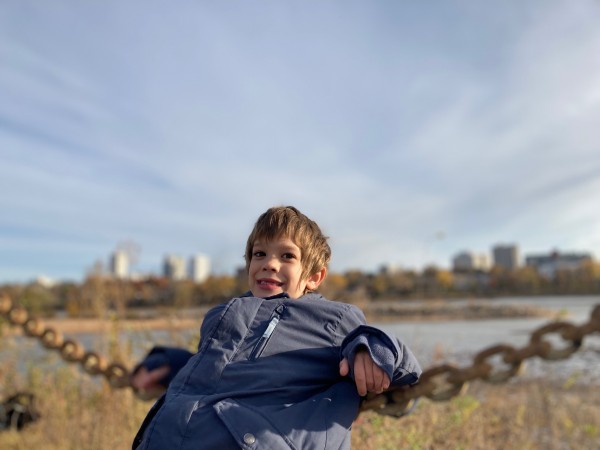 The Von Franken Family Food Run is an annual event put on the Tulsa Running Club. In pre-pandemic years, it’s included a pancake breakfast and coffee. Participants are invited to #fillthetruck by bringing non-perishable food items for the Salvation Army. And Tulsa Animal Alliance was also there to accept donations. 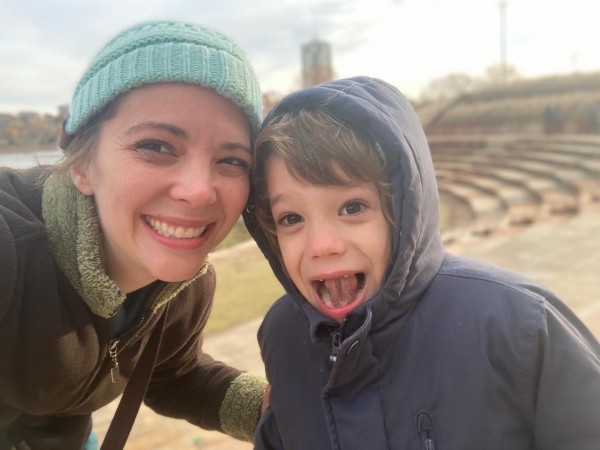 I’m not sure if this will become an annual tradition. But again, it’s something I’d wanted to do for awhile, and I’m glad we finally did!

What are some new things you’ve tried lately? Tell me about them in the comments! 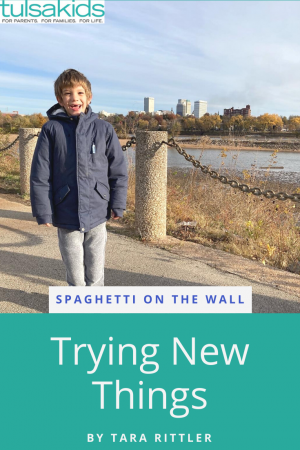 Picking Berries and Flowers at Joe's Farm in Bixby!