Child development professionals tell us to impose logical consequences when our children misbehave. As parents, we want our children to be truthful, and I hope we can add kind and humble to that. We also expect them to use listening skills and words rather than fists to settle disagreements. So how do you explain to a child that many of our country’s leaders, including the president, are acting like, well, children?

I watched President Trump’s speech on Wednesday. He fanned the flames of sedition by ticking off the litany of lies he’s been spreading about the “stolen” election, and then he threw a match on it by inviting the mob to move down Pennsylvania Avenue to the U.S. Capitol to stop the steal.

We know Trump doesn’t like losers. But don’t we teach our children to be gracious losers? If you’ve ever had a kid on the losing end of a soccer game, or struggling with getting a low grade, or who lost a class election, what did you say to that kid? Go make up some lies about the other team or your competitor. Call them stupid. Make up some ways that they cheated. Whine about how the rules are all wrong. Or if none of that works, just physically beat up your opponent. No. I’m pretty sure most of you do not suggest those tactics. Sometimes you lose, and being gracious in winning and losing is an important life skill.

So, why do we accept childish behavior from our leaders, especially the leader of the Free World? How do we explain his actions to a child? I don’t know. Maybe you could go back to the last election or the many elections before that and, as boring as it might be, show how the peaceful transfer of power was carried out by real adults who put the country over their own bruised egos. (I can’t say that I’ve ever watched the counting of the electoral ballots before this election).

While you’re doing that, you could provide a civics lesson on how the U.S. government works. Maybe you could compare it to your kids’ soccer team or tennis match and talk about how there are rules in place, a certain decorum and graciousness in winning and losing, that keeps things from devolving into chaos. Those rules, like the government, are a structure designed to keep one person from destroying the game.

Lying and finger pointing are not attractive in children, and they’re particularly unattractive in adults. If your child came home and said, “My teacher is a zombie who eats children in the basement,” would you believe them? Even if 40 percent of the kids in the class were in agreement about the zombie teacher, it would be hard to believe. So why does our president share conspiracy theories? Pedophiles run the country? Mysterious things happened to voting machines? Thousands of dead people voted? There was some kind of vote dump on election night because votes were counted throughout the night? (but only in states where Trump lost). And, then there are the really weird assertions about pedophiles and child trafficking that Trump is protecting us from. What?! How do you explain that to a kid?

Trump and many of our own representatives perpetuate these lies for their own gain. From what I’ve observed, there are people who really believe the election was stolen and believe Trump over the U.S. courts, state officials, poll workers and numerous recounts. It’s like when our kids say, “Well, everyone else is doing it, so why can’t I?” And then, of course the classic parent response is: “Well, if everyone else was jumping off a cliff, would you do it?” Shouldn’t our elected leaders be telling their constituents the truth to keep them from jumping off the cliff?

If Trump and the representatives who follow him said that it’s healthy to eat rat poison (or drink bleach), would you believe it?

And what about finger-pointing? Whenever something goes wrong in Trump world, it’s not him or his followers that are to blame — it’s THEM (fill in the blank – antifa, Black people, immigrants, Muslims, etc). Don’t you hate it when your kids say, “I didn’t do it” when you know they did? So, it’s a little big stretch to think that someone paid a busload – or airplane load – of libs to dress up in their Trump and MAGA gear (that I guess they have lying about the house?) to go create some violence at the Capitol in order to make Trump look bad? I don’t know about you, but I tried to instill a sense of accountability in my kids. Own your actions. Don’t blame mistakes on someone else. Take responsibility and take the consequences.

Trump, Cruz, Hawley (I was glad to see he lost a lucrative book deal because of his egotistical actions) and our legislators who encouraged and incited the attack on our Nation’s Capitol should pay the consequences for lying and for their actions. People died. Maybe this is what we can tell our kids. Congress, despite the horrific events, did their job as the constitution says it should, on the same night that the Capitol was invaded. Our country, our constitution, was bigger than the person who wanted to take it down just because he was a loser. 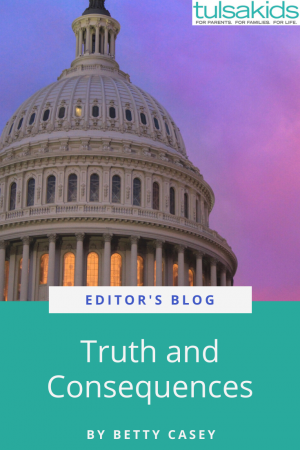