Travel to a Lost Kingdom

This summer, lose yourself at Lost Kingdom and spark a fire in your kids to commit to caring about the future of Earth’s unique creatures.

When asked to attend the donor preview at the Tulsa Zoo last month, I gladly said yes because of my adoration for what our local zoo represents —- a special family gathering place filled with fun, exploration and adventure. Zoos attract me, and many people, for all of these reasons. Plus, it gives us the unique opportunity to learn about exotic and endangered animals and their habitats, perhaps encouraging us to protect them and their environments around the world.

Having one kid in college and another in high school, it had been some time since we made the loop to visit our non-human friends in their familiar environs. So, my husband and I had no idea what to expect when encountering Lost Kingdom, the newest and most extensive development to date (and one of many planned for in the zoo’s aggressive master plan). 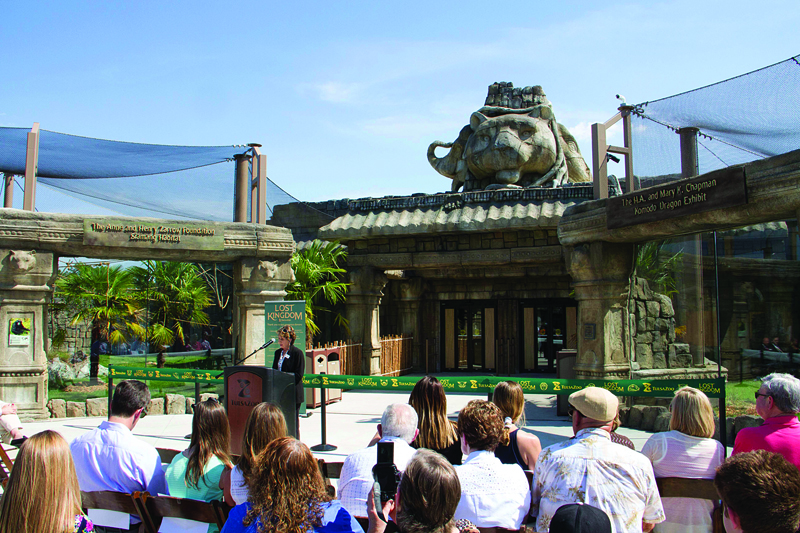 Shock and awe overcame us as we made our way along the path to Lost Kingdom’s grand entrance. The impressive gateway took us into a whole new world.

Twenty million dollars went into creating Lost Kingdom, and it shows! Marveling over the construction of the new 5-acre attraction, we admired the impressive rock formations and stonework and the extraordinary attention to detail and fine craftsmanship. Lost Kingdom felt on par with many of the great parks our family had visited in years past, and we even compared its quality to top-notch Busch Gardens, for instance. We hadn’t seen the animal exhibits yet and we were sold, agreeing that Lost Kingdom was a huge leap forward for the future of our zoo.

Housing creatures that are native to Asia, each of the carefully designed exhibits has large glass viewing stations including indoor and outdoor access points, thus maximizing the viewer’s experience while allowing the animals to thrive in an environment that closely matches their natural habitats. In addition, curious visitors can now see the animals year-round. And, if you get hungry, Lost Kingdom includes a new snack bar and dining facilities.

Tigers, snow leopards, Komodo dragons, Chinese alligators, red pandas, Siamang monkeys, binturong (a cat/bear-like mammal) and endangered birds all live within the Lost Kingdom. Lindsay Hutchison, Tulsa Zoo’s vice president of development, said that some animals have been moved from other areas of the zoo while others are new to the environment, which exclusively features endangered animals from Asia.

When asked what she believes are key factors that make the Lost Kingdom first-rate, Lindsay replied,  “First are the improved habitats for the animals in our care. Larger yards for our tigers and plenty of ledge space for our snow leopards are just two examples. Secondly, the increased viewing opportunities available to guests.” Lindsay went on to say, “Our mission is to inspire passion for wildlife in every guest, every day. We want our guests to see their favorite animals, and maybe meet a new favorite.”

The Master Plan: Past, Present and Future

The 20-year master plan to create a modern, world-class zoo is well underway with the already completed Chapman Rhino Reserve in 2015 and now Lost Kingdom. The remaining improvements will be rolled out in phases, at an expected cost of $150 million and bankrolled by the zoo’s Building Beyond Your Wildest Dreams capital campaign. A whopping 20 new and refurbished exhibits are planned, all housing animals in state-of-the-art, geographically representative regions.

Tulsa Zoo’s Executive Director Terry Correll, said, “Part of what makes an exhibit ‘modern’ is by having an immersive quality. As opposed to an animal being displayed in a menagerie-like setting — in an old-style grotto such as our tigers — the idea is to immerse the guest in an environment that is more naturalistic and representative of where the animal would be found in the wild.”

To that end, a young girl from out of town, who was visiting Tulsa Zoo for the first time gave the ultimate zoo compliment when she remarked, “This zoo isn’t sad.”

In addition to major viewership enhancements and the high bar reached with the caliber of animal dwelling spaces, there is another important goal in mind. “On one level, it is important to bring exciting, immersive exhibits for our guests to enjoy,” Correll said, “but it is also important to choose animals that carry an important conservation message. Good exhibitory helps accomplish that goal of educating the public in a dynamic and meaningful way.”

It is a privilege to intersect with wildlife from near and far right here in Tulsa. By visiting the zoo, we all benefit from a fun outing while the animals benefit from our support. Not only does the entry fee help keep the animals alive and well, it also goes toward research and conservation.

World-renowned National Geographic photojournalist Joel Sartore’s lifelong quest through photographing all of the endangered species worldwide is to raise awareness and influence all of us to participate in saving animals from extinction. His project, Photo Ark, is gaining global momentum and rallying all of us to pay attention to the importance of doing our part. He shares that the simplest step for people like you and me is to support our local zoo.

So, this summer, why not lose yourself at Lost Kingdom and spark a fire in your kids to commit to caring about the future of Earth’s unique creatures?