Thoughts on the TPS Board Decision

This has been a year like nothing any of us could have imagined. Absolutely freaking bonkers. Some days I wake up with a strange nagging dissonance in the back of my head like I woke up in the wrong bedroom. Sometimes it’s stronger, like we’re wading through a reality where the air is heavier and nothing is quite right. It’s the strangeness you feel in a funhouse or an unsettling dream where everything seems too close to reality but just wrong.

And then I have to remind myself that someday this will be a fading memory and eventually, a sidebar of a chapter in a middle school history book. Remind myself that although it feels like the world has been cast in a new photography filter, the physical facts of epidemiology mean the virus won’t be with us forever. It’s like realizing you’ve wandered too far off a hiking path and you’re tired and cold. You have to keep moving forward to make it home, and exhausting as it is, you’re closer with every step.

Like many folks with Generalized Anxiety Disorder, I tend to get caught in negative self-talk loops. But I know from my own experience growing up how much a parent’s perspective can color a kid’s worldview just as I know rationally that all of this is temporary even if it doesn’t feel that way. That’s why despite how exhausting and difficult virtual school and distance learning are, we have been very cautious about how we speak about it to and in earshot of the kids.

I know that distance learning and virtual schooling is a mess this year despite how hard teachers and admins are trying. But COVID-19 is a situation where everyone is losing…for now, at least. It’s a natural disaster, a tsunami that washed away the world we thought we knew. And we’ll rebuild, but it’s going to take a lot of compromise and pulling together. It’s going to be easier on all of us if we find a way to give each other a break and manage the best we can until we’re out of the worst of it.

That’s why I’m encouraging TPS families to try to be patient with the situation and magnanimous with each other whether they would prefer their kids be in school physically or stay at home for now.

Why Our Family is Cautious

When Justin and I were a young couple, it seemed like he was getting bronchitis constantly and it would last for weeks or even months. It was at times chilling to listen to him wheeze while he slept; I sometimes worried he would stop breathing. Occasionally he got so sick that I drove him to Claremore Indian Hospital, where he would receive a breathing treatment and a bronchitis diagnosis and be sent on his way. One night, after he became weak and his lips turned grayish blue, an ER doc told us that Justin hadn’t been getting bronchitis; it had been asthma all along.

With medications and regular breathing treatments, Justin has been able to manage his asthma safely over the years. When Arthur, now 12, was little, it became apparent that in addition to Justin’s whimsical sense of humor and Welsh features, he had also inherited his asthma. Like Justin’s, Arthur’s asthma is managed now, but we’ve had our share of scares over the years, like when Arthur was dangerously close to pneumonia after inexplicably contracting two strains of flu at the same time.

A friend once told me we were being overly cautious about COVID-19 because only people who were “already sick” were dying. The problem with this fallacy is first that death isn’t the only outcome we’re trying to avoid. I have a friend who was in excellent health and training for marathons who now has a heart condition after her bout with the virus.

There’s also a phenomenon with people thinking “pre-existing conditions” refer to chronic, serious disease, people who were already ill to begin with in some way. If you have high blood pressure, asthma, type 2 diabetes, or you’re pregnant or overweight, you’re at higher risk as well.

Every time I see someone dismissing precautions, I think about my husband and kid taking a nebulizer treatment, the sound of it in their lungs, the way they shake afterward. I’m not, as some might think, obsessing over the fear of their death, though. I’m thinking about how 20-some-odd years ago that ER doctor took something that threatened Justin’s life and turned it into a manageable condition.

For our family, “cautious” doesn’t mean we’re “hiding in a basement.” In a perfect world where most of us are following epidemiologists’ recommendations for social distancing, masks, and basic sanitation, life doesn’t have to stop.

“It’s my right not to wear a mask!” she proclaimed defiantly, having apparently not seen the sign on the door or the city of Tulsa mask ordinance.

Honestly, as a family who tends toward a “live and let live” philosophy, I actually don’t care that much whether she was wearing a mask, a fact I promptly informed her of. I mean, I would prefer she did, but at the end of the day, people are going to do what people are going to do and as long as they can just step back, I can’t see the benefit in belaboring the point. But the experience was a reminder that even if we’re very careful ourselves, we can’t account for all of the variables in the world.

That brings me back around to school. As is often the case, I immediately regretted scanning through the comments on the TPS press release about bringing kids back to school over the next month.

I’ve spent several years of my life working in schools, spending a good amount of time in an elementary school, middle school, high school. In all of those years, one thing I know beyond a shadow of a doubt is that kids of all ages are naturally inclined to physically interact with their environment and each other. Without knowing for certain, I would presume it has something to do with their cognitive development, this innate drive to wiggle and touch everything and cross boundaries of personal space.

While it may be possible for some children and teens to follow basic guidelines like not touching their masks, wearing clean masks, and keeping their hands to themselves, I certainly wouldn’t bet my rent money on any of my kids doing this day after day, week after week, and they’re pretty good kids. There’s also a thing that happens where kids that manage themselves pretty well at 8 AM gradually come unraveled after lunch.

But we don’t make the decision to keep our kids home from school lightly. I used to think hell would be standing in line at a tag agency eternally, but now I realize my personal hell would be trying to type web content while making sure they all stay on Exactpath and hit all of their Zoom meetings.

And I also worry about the kids not being around other kids. With Noah’s autism, he needs every opportunity to practice engaging with people outside of our family, and Arthur is already so introverted I worry about where he’s going to land after this ends. He’s also missing out on debate club, something that was very important to him last year.

Parents were absolutely terrible to each other in that comments section, a theme that worries me greatly because, for the second time, our kids are watching us and taking queues. Many of those who wanted their kids back in schools were laughing at and mocking those keeping their kids at home. And many others reluctant to send their children back were condemning the school board and berating the families wanting the school to open up again.

That’s why I’m imploring everyone to please try to see it from your neighbor’s point of view and to remember that the TPS decision does not mean that returning to school is compulsory. It only means families who need or want to go back can.

The school board was faced with an impossible choice, and they’re trying their best to give everyone options. I know many of us are worried about the teachers, as I am. However, if those of us who are still able to keep our kids home do, this will mean smaller classrooms at schools, making it easier to implement safety protocols and keep teachers, kids, and staff safe.

I also don’t blame anyone who wants or needs to get their children back in school as soon as possible. I’ve been in the situation where having the kids in school was the only way we could afford to work. Having kids in school can mean the difference in whether rent gets paid for many families. It’s also true that many kids are struggling or downright failing through online learning and others that need accommodations they just can’t get without being physically present. And then there are the many, many kids suffering from mental health issues due to this entire messed-up situation.

That brings me to my point: This is something none of us could ever have predicted. As a community of parents responsible for raising the next generation, we’re doing our kids (collectively) an injustice by condemning each other for wanting what we believe is best for our own families.

If you need or just really feel passionate about sending your kids to school, you deserve to be treated with respect for the decision you’ve made. The same is true if you’re like our family and you feel safer with everyone at home. We’re all doing the best we can here, and parenting is hard under the best of circumstances.

Please be kind to each other, and let’s all just do our best to get through this. At this point, we’re all warriors, and by God, we are all going to be better off if we just take it easy on each other and have some compassion.

I’m fairly certain many of my friends won’t agree with me, and that’s okay. I’m not asking that you love the TPS decision. I’m just asking that we all try to be kind to each other and remember whether our kids are home or at a TPS desk, they’re all still part of the same school and community, and we have a chance to do a heckuva lot of good by showing each other some neighborly support.

TPS teachers, parents, neighbors, you’re all amazing, and we got this. Thanks for reading, and have a magical fall break in your little nebula. 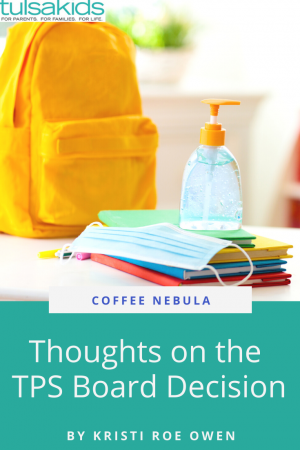