Last Sunday, Joss and I headed downtown to watch the Tulsa IronMan. Somehow, we managed to show up at the second transition point just in time to watch some of the fastest competitors transition from the bike to the run. We got close enough to the barrier that we were able to see which countries the competitors had come from. It was definitely an international event! 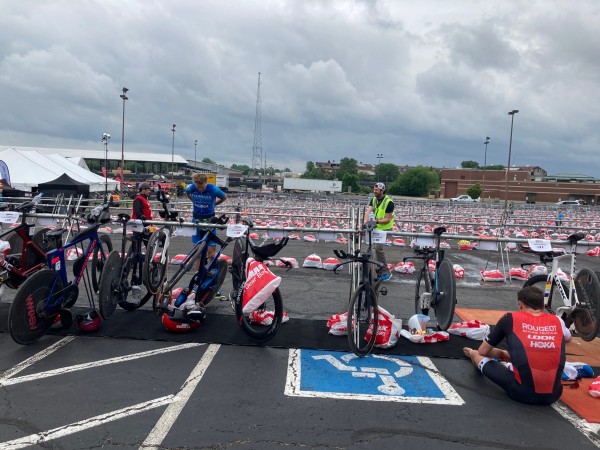 The transition point took place at OSU-Tulsa and the runners headed down Greenwood to Archer. We followed the course and ended up at the Marvin Blades Sr. FACES OF GREENWOOD Timeline Experience. I’d heard about this but wasn’t sure how to view it. So this worked out perfectly.

Marvin Blades Sr. worked both for the City of Tulsa and Tulsa Public Schools as a highly respected police officer. Read more about his career and community work here.

According to this article by KOSU, Marvin Blades Sr. was also a historian who collected “photos, documents and other memorabilia of life in Greenwood before and after the Tulsa Race Massacre.” Not only did he collect these items, he turned them into collages. Following his death, Blades’ wife donated the collages to the Greenwood Chamber of Commerce. 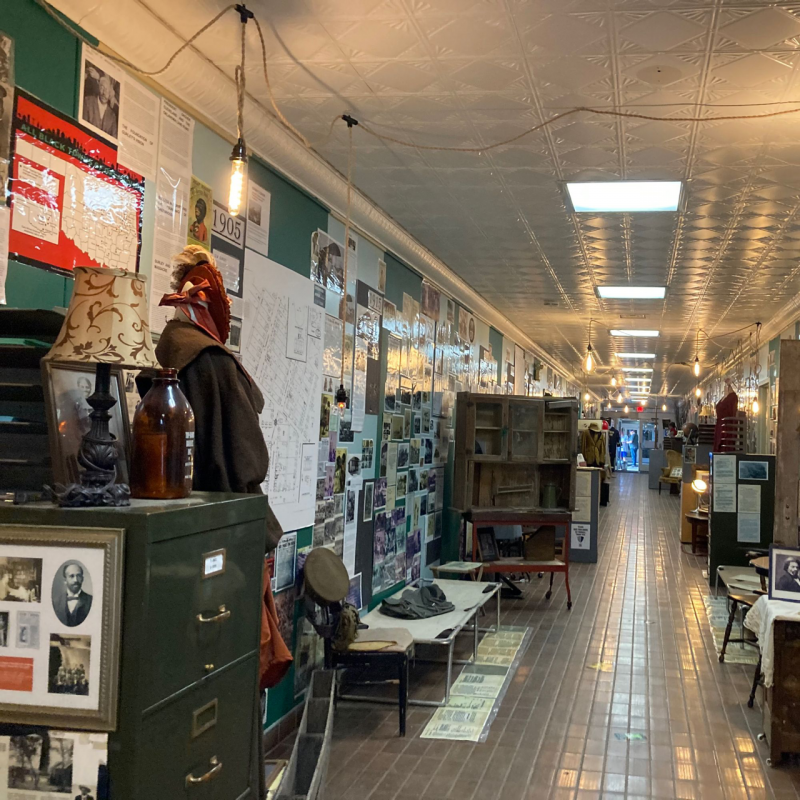 Lincoln Cochran found the collages in 2020. From there, he began building and curating what would become the Marvin Blades Sr. FACES OF GREENWOOD Timeline Experience. KOSU writer Devin Williams explains more about Cochran’s vision. 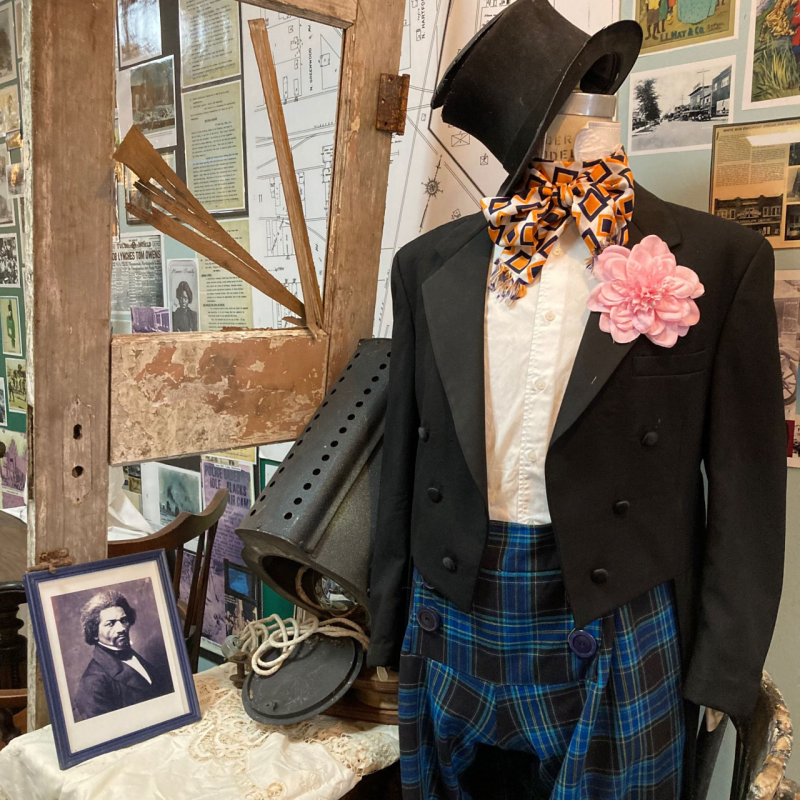 If you take kids, be aware that you may need to have some conversations about the images contained in the collection. Because it is a historical collection, some images include racist depictions of African Americans. Here’s a helpful article from our fellow parenting publication, MetroParent, that gives tips for having these kinds of conversations: https://www.metroparent.com/parenting/talking-about-race/addressing-racism-in-kids-books-and-movies. 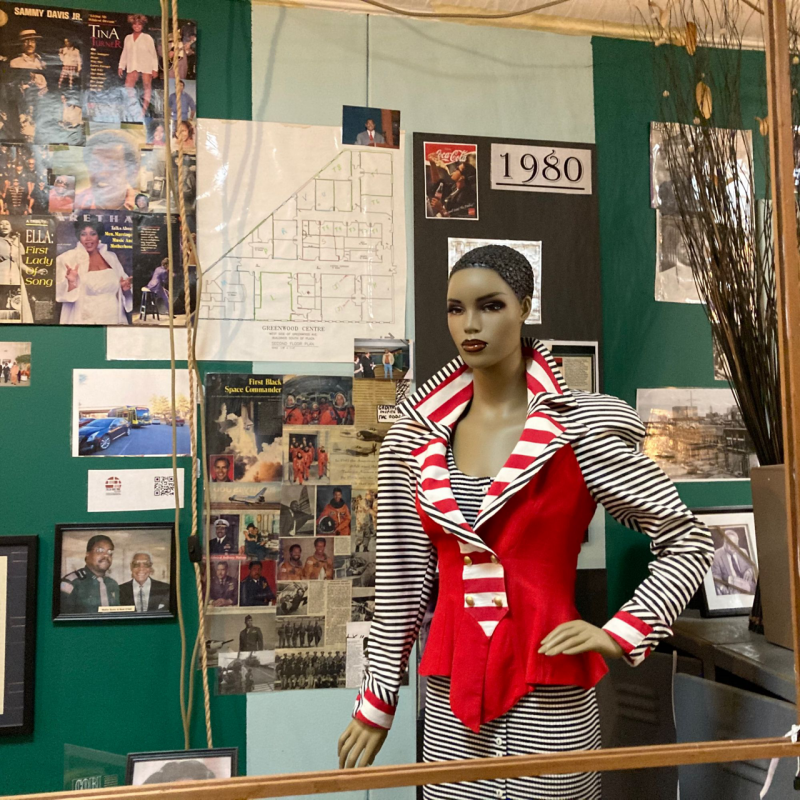 Go to https://www.bwsaokla.org/ to learn how to view FACES OF GREENWOOD. I believe it will be on view through the end of 2021.

The Timeline Experience is supposed to give viewers a “fuller perspective” on the history of Greenwood. Contrary to what some may think, Greenwood didn’t disappear following the Tulsa Race Massacre. The district was rebuilt (at residents’ expense) shortly following the Tulsa Race Massacre and continued to be a vital district for the next couple of decades. According to that same KOSU article, the City of Tulsa itself made the decisions that led to the “crippling of Greenwood.”

For more information about how the Greenwood District’s current gentrification problems, check out this article from the Washington Post. https://www.washingtonpost.com/business/2021/01/17/tulsa-massacre-greenwood-black-wall-street-gentrification/

According to this article, “The displacement of Black people from Greenwood did not end with the massacre. In the 1960s and ’70s, federally funded ‘urban renewal’ programs led to the demolition of Black homes and businesses for highway construction that also cut off the Greenwood commercial district from its residential neighborhoods. Some of that cleared land became the Tulsa campuses for Oklahoma State and Langston universities.”

It also discusses the resistance toward reparations, rising rent costs in the district, and the problem with capitalizing on Greenwood as a tourist destination instead of making reparations to survivors and families affected by the Massacre. Lots of food for thought. 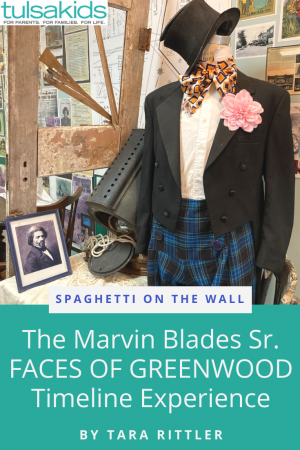