The whole thing with Joe Biden, his touching and hair sniffing, got me thinking about touch. I have a friend who touches everyone. He indiscriminately massages shoulders, both men and women, young, old, friend or foe. He’s a hugger. I always appreciate those hugs and shoulder massages. They are in no way sexual. That kind of touching is relaxing. I know the difference because I have had men invade my space in unwanted ways that made me feel extremely uncomfortable. Those advances were not only sexual, but also predatory and powerful. In some instances, they were meant to show who was the physically weaker person.

I also appreciate the warm touch of people from other cultures. My Latin-American friends always greet me with a hug and say good-bye the same way. My daughter’s Greek boyfriend gave me a hug and a kiss on the cheek when we met. These are lovely gestures.

So, where does that put touch in 2019? As parents, we try to convey to our children the difference between “good” touching and “bad” touching. Any touching that might make children uncomfortable is bad, and children can be given the power to say no!

But, like the kid who gets suspended for taking an aspirin to school, I’m afraid we may stop touching one another for fear of negative reprisal. Will a teacher think twice before throwing his or her arm over the shoulders of a student who needs comforting? Will preschool teachers stop touching a young child on the shoulder to help him focus? Will my friend stop massaging my shoulders? Will every touch or potential touch be scrutinized?

An emoji has replaced the personal contact of a hug, a kiss, a hand on the shoulder. We text each other rather than have face-to-face conversations where we may place a hand on a forearm (one of my unconscious ways of touching) or offer a sympathetic squeeze of the hand to a distressed friend.

The fact that an entire industry has popped up around touching implies that maybe we are overthinking our natural instinct to touch one another. “Cuddle buddies,” people who make money to provide physical contact, are replacing the normal contact we might receive from friends, relatives, even spouses. Cuddle buddies are not sexual, but are paid to provide human contact to those who are starved for physical touch.

In James Hamblin’s article “Can We Touch?” in The Atlantic, the health benefits of touch are outlined. Hamblin refers to Tiffany Field’s study in which she found that basic human touch caused premature babies to gain weight. “…just 10 days of ‘body stroking and passive movements of the limbs’ for less than an hour led babies to grow 47 percent faster. They averaged fewer days in the hospital and accrued $3,000 less in medical bills.”

Similar to Field’s study, Hamblin writes about the research done in orphanages where children who were deprived of touch suffered from “failure to thrive.” Such neglect – the absence of human touch – left the children with lifelong, irreversible physical and cognitive impairments.

If you don’t want to be touched, by all means, make that known! But I hope that the little dust-up about Joe Biden and his fondness for physical affection will be short-lived. I have to believe that people know the difference between affection and sexual harassment.

How do you feel about touch today? 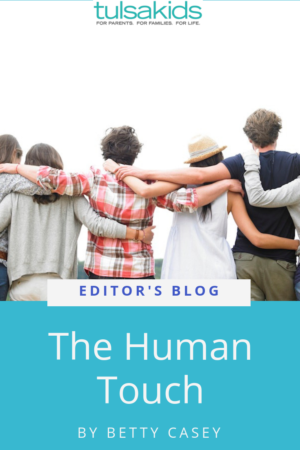