When I’m faced with something really scary and anxiety-producing that I can’t do anything about (like deadlines), I usually manage to go into complete denial. This is what I did when I found out that the Texas State Senate approved a bill that would allow handguns on the campuses (including dorms and classrooms) of public colleges and universities. Just typing that sentence makes my blood run cold. I have a daughter who lives and works in Austin and is going to start graduate school there this fall. I think my heart just stopped beating.

Do the lawmakers in Austin not remember 1966 when a sniper in the clock tower on the UT campus shot and killed 14 people and wounded 32 others?

Yes, I was in denial about Texas allowing guns on campuses, and then Charleston, S.C. happened. I can’t keep shifting my brain into denial – like I did after the Newton massacre of those sweet children, or the Aurora, CO bloodbath. Shouldn’t we all get out of our collective denial and say enough is enough?

Are more guns in more places really going to stop the killing? A study by the Harvard Injury Control Research Center showed that more guns means more murders, which is true no matter what state or even country you are looking at.

So, didn’t the Texas State Legislature do their homework? What is the age of a typical college student? In that age group, firearm homicide rates in the U.S. are almost 43 times higher than in other countries!

So, a UT kid goes down to 6th Street, downs a few beers and strolls back on campus with his gun. Another guy passing on the sidewalk looks at him “funny” and BAM!, that’s the end of that guy. Oh, and maybe there could be some collateral damage if the drunk college kid is having an especially bad day. Maybe that collateral damage could be my daughter — or yours. 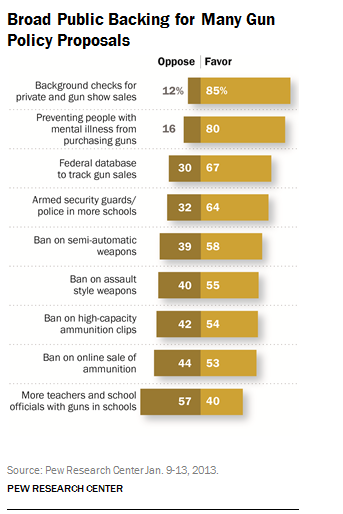 According to the Pew Research Center, about one-third of Americans with children under 18 at home have a gun in their household. Do you ask the parents of your child’s friends if they have guns in the house when your child goes over to play? Do you ask if the guns are secured and unloaded? If you expect a kid to not pick up a gun because you tell him not to, you’re definitely in denial. Kids are curious by nature.

I feel as if my daughter is going into that home with the loaded gun sitting on the kitchen table, and I can’t do anything about it.

It’s so easy to get a gun in the U.S. You can get one at a gun show, on Craigslist or from your neighbor. But there are hopeful signs for commonsense safety restrictions.

To the right is a graph showing that the American public does overwhelmingly support some restrictions on guns.

Isn’t is time that the majority of us who would like to see safe gun ownership in the U.S. stand up and say enough killing?

Do guns really belong on college campuses? I guess those Texas professors will be a little more discriminating about who they give failing grades to from now on.