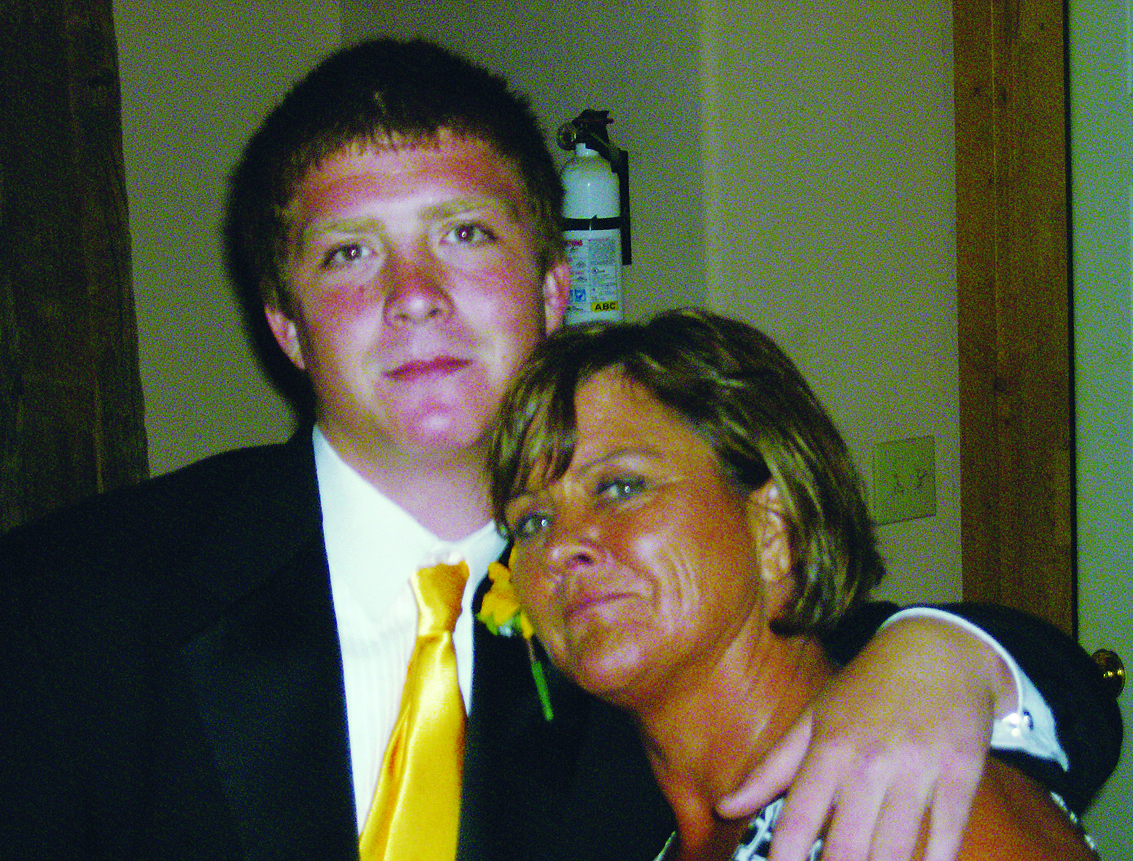 “Chris was an exuberant young man and child. He was full of zest, competitive. He was my bright, shiny penny with his bright red hair,” said Stella, a speaker and advocate with the coalition.

According to the Oklahoma State Department of Health, suicide is the second leading cause of death for 15- to 24-year-olds in Oklahoma. An average of 76.5 people in this age group died by suicide every year from 2004-2013.

“When he was 4 or 5, he won a sheep rodeo down at the chute. He was scared and I said, ‘Jesus will be there with you.’ He looked at the rodeo clown and said, ‘Forget about Jesus, I want to know are you going to be there?’” Stella reminisced, the sound of both joy and sorrow in her laughter.

Certain conditions increase the chance a person may try to take his or her life. The more risk factors a person is experiencing, the higher the risk. Just being in the male and 16-years-and-older categories placed Chris at higher risk.

Other risk factors include changes in family structure (such as divorce, remarriage), a family history of suicidal behavior, or family violence or abuse. Stella said she filed for divorce and a protective order due to his father physically and verbally abusing him.

While going through divorce, Stella attempted suicide and was in a coma for three days. “I walk daily with the echo of his voice saying, ‘I’m only doing what you taught me to do, Mamma.’”

At the time of his death, Chris was also facing estrangement from his father and interpersonal relationship challenges in his new marriage.

Everyone who has lost a child by suicide has a different story and set of circumstances. “We just don’t think it is going to happen to our child,” Stella said. “As a mom, we want to believe there is a pathway through whatever struggle our babies encounter.”

Other risk factors include high levels of stress due to pressure to succeed, unrealistic parental expectations or compulsive, extreme perfectionism.

Dr. McGaha, who is raising three girls, ages 6, 9 and 13, advises parents to be mindful of death ideation in popular movies, coverage of celebrity suicides, popular music and the cyberworld. “If I’m already depressed, the media can influence my desire to self-destruct,” she said.

Read the music lyrics. If there is a concern, talk to your children about what they’re listening to and how they are relating to those lyrics. Her children are allowed to watch most PG movies, but she watches for violence in PG-13 movies.

Dr. McGaha also points to the cyberworld where teenagers who are already depressed could search “suicide” and find enactments. As Stella discovered the details of Chris’s death, she was shocked when her 16-year-old son was aware of the method his brother had used to take his life. When Stella learned that Chris had hung himself in the laundry room, she kept reiterating this was impossible because the ceiling was too low.

“My 16 year-old said ‘It’s called passive hanging, Mom.’ I said, ‘Where did you hear that, son?’ He said, ‘The Internet.’” Stella then searched the Web and found a YouTube video of a young man taking his life through passive hanging.

Michael Brose, MSW, executive director of the Mental Health Association Oklahoma (MHAOK), said bullying and cyber bullying also are contributors to self-destructive behavior. “If a student is depressed and also being bullied, their risk factor just doubled,” he said.

As opposed to risk factors, protective factors are conditions that reduce the likelihood of suicide. Good social skills and friends provide protection against suicide, while the opposite is also true. “Youth rely on peers as a social, academic and emotional support… Unhealthy peer influences can influence unhealthy emotional states — such as depression and anxiety,” Dr. McGaha said.

SafeTeam students are trained on issues affecting their peers and given tips on how to handle such situations. These students then decide what they would like to do to educate their peers on mental health, including awareness campaigns, fundraisers, speakers, fun events or activities.

“They’re kids who want to help their friends,” Brose said. “If we’ve done a good job partnering with them, they will reach out to us to say, ‘Hey my friend is in trouble. Will you help me help them?’ The number one referral source to SafeTeam is the kids themselves and the second is their friend.”

SafeTeam requires the school provide one adult who is readily available to assist with issues around mental health, stress, substance abuse or being bullied. “In high school age groups, school counselors are primarily academic advisors who are overloaded by testing requirements, academic advising and letters of recommendations,” Brose said. “But individuals are needed to be available on short order for counseling…helping kids with personal issues.”

Also as a part of SafeTeam, school-based social workers, a school nurse, interested staff members, coaches and other interested individuals meet to discuss students that they’re concerned about, as well as to create action plans and plans to help establish a positive school culture for all students.

“Far and away the majority of people having thoughts of suicide are very ambivalent. With the right type of intervention, timely intervention during those periods, there is a high probability a completed suicide can be prevented,” Brose said.

Stella said she tried everything she knew to save her son, from doctors and hospitalization, to counselors, to life skills education, to tough love. But even in her immense pain, she urges others to keep reaching out and offering hope to those who are suffering.

“We must abandon this attitude of dismissiveness when dealing with individuals in crisis,” she said. “Just because we think a person should have the capacity to find a solution, doesn’t mean they do.”

Intervention by Family and Friends

Another protective factor is having strong personal bonds, particularly with family members and other caring adults. Leveraging these relationships, the MHAs Question, Persuade Refer (QPR) program encourages family, friends or others who notice a person is struggling to talk to the person. Here are some tips from QPR:

Ask the question (Q), “Do you want to stop living? or “Do you wish you could go to sleep and never wake up?”

Listen first. Then, persuade (P) them to get help. “Will you go with me to see a counselor?”

Dr. McGaha, who also speaks to groups about QPR, said that caregivers/parents need to talk to their young person about what’s going on, including the topic of sadness, depression and suicide and be open to listening and to doing something about it. “If that person is sad or suicidal…if you don’t talk, they may not know they have the permission [to not take their own life].”

Parents must advocate for their teens. Get to know resources in the community who you can trust to talk to your child. “If my oldest is crying, I have to monitor her closely. I interact with her teacher; I have their e-mails, contact information and may contact them,” Dr. McGaha said. If you notice that something worrisome is going on with your child, don’t hesitate to reach out to teachers, school counselors or others to see if they may have noticed a change in your child as well.

Sixty percent of suicides are completed by firearms. Having access to guns increases the risk of a completed suicide, while removing guns from the home decreases it. “Preventing suicide is about friends and family spying the warning signs and taking action,” Brose said. “[If you are worried about your child], it is important to remove all lethal means from their environment, including removing or securing all firearms (using trigger locks, safes) and all lethal medications.”

Many faith communities have active youth programs and are one area where outreach to a youth in crisis is possible.

“I think faith communities could do a lot more than what they are currently doing because people don’t want to talk about this,” Brose said. “These communities are places where kids can come and talk and share. But they have to be open to kids who are not living the life they want them to live right now.”

One solution for faith communities and other communities where youth gather is to take a community-wide QPR training course to learn how to Question, Persuade and Refer someone in crisis. The MHA offers this free seminar to area churches, schools or any group at any location.

In general, access to quality mental health care is a protective factor against suicide. In Oklahoma, mental health care ranks 45th in the United States, according to the Parity or Disparity: The State of Mental Health in America, a 2015 report released by Mental Health America.. This statistic reflects that the state has a higher prevalence of mental illness while having lower rates of access to care.

The MHA is hosting the 21st Annual Zarrow Mental Health Symposium to explore transforming the mental and behavioral health system to an integrated and collaborative care model designed to treat the whole person, and will include system navigation and the removal of barriers to care.

Unfortunately, Chris was not able to be saved through the current system. He was hospitalized twice due to suicidal intent and was released from the hospital eight days before his death. He also saw his counselor two days before, and his psychiatrist the day before he died.

“The standard operating procedure is to place [those suffering from mental illness] in the hospital for 48 hours. In 48 hours, you can’t even determine if there is going to be adverse side effects to the medication you put them on. [The current system] is not working. Our [suicide] rates keep going up,” Stella said.

Stella feels the medical community didn’t hear Chris when he told them how sick the medication for bipolar depression made him. Also, he had not slept for days and asked his psychiatrist for a benzodiazepine so he could sleep. Based upon previous treatment for substance use disorder, she denied him.

“I wish she could have been able to see how agitated he was,” Stella said. “Maybe if she had prescribed something, one or two pills so he could sleep, the outcome could have been different.”

Looking back, Stella said that maybe intensive outpatient therapy where protective factors could have been strengthened would have saved Chris’ life, but said he did not have insurance.

Spotting the Warnings and Signs

Take all of the signs and warnings of suicide seriously. Dr. McGaha notes that the more clues observed, the greater the risk. The Society for the Prevention of Teen Suicide lists the following warning signs:

For more information on school-based programs the MHA can help implement, such as TeenScreen or SafeTeam, call 918.585.1213.

Washington County Suicide Prevention Coalition, 3rd Annual Suicide Awareness Summit, September  8, Bartlesville Community Center, featuring Kevin Hines, who will offer his message of hope. He is one of 34 survivors to attempt suicide by jumping off of the Golden Gate Bridge. Free, but register in advance. www.washingtoncountysuicideprevention.com.