Teaching Teens to Not Be Victims of Fake News

According to a study by the Pew Research Center, more than 80 percent of U.S. adults often use their smartphones, computer or tablets to get their news. This shift to digital sources, specifically social media platforms, is even more pronounced when it comes to the younger generations. These digital natives grew up in a world where local papers are as rare as landlines, and streaming services like Amazon and Netflix have all but replaced the concept of three or four “major broadcast networks.” Unfortunately, this huge disruption in the traditional news industry has come at a cost. Misinformation and disinformation are free to proliferate, distracting people from important issues, causing conflict and even undermining democracy. Learning how to differentiate between fact and fiction – to weed out “fake news” – has never been more important.

The difference often comes down to intent. Misinformation is false or inaccurate information that is mistakenly or inadvertently created or spread without the intent to deceive. Disinformation, like propaganda, is purposeful. It’s deliberately created and spread in order to influence public opinion or obscure the truth.

Although “fake news” has been around a long time – think supermarket tabloids – the explosive growth of social media and the public’s increased reliance on these platforms as a news source has exponentially increased the amount and the speed at which it spreads.

As individuals, there are a number of steps we can take to recognize and reduce the spread of fake news. Tulsan Emma Robson, a recent graduate of the University of Alabama, studied journalism and creative media. Robson gets her news from digital sources, but she’s selective about what she uses. She has the CNN app on her phone and she listens to news podcasts like “The Daily” produced by the New York Times. She also follows some news outlets on social media.

“I feel like there is more of everything on social media these days. I don’t necessarily think there is more misinformation being spread, but it’s definitely reaching a wider audience,” she says.

Robson notes that even if something was originally factual, it can easily be misconstrued when it goes viral or is spread around the Internet. Accordingly, she uses her own system to fact check.

“When I read or see something that seems like it might not be true, I try to find at least three other sources on the subject,” she says. “This isn’t a perfect method, but it does help build a story that is likely more accurate than any of the stories on their own. Also, since most of our major news outlets have a political bias, I look for sources across the spectrum. This helps me understand current events in a deeper way and form my own view of what’s happening in the world.”

You can also look at nonprofit organizations like PolitiFact, Factcheck and Snopes, which are dedicated to exposing false news. The Poynter Institute for Media Studies, a nonprofit journalism school and research institute has a number of great resources, too. In addition to the previously mentioned PolitiFact, poynter.org is home to The MediaWise Teen Fact-Checking Network. The program has its own YouTube channel devoted to debunking misinformation and building media literacy skills. Daily fact checks for teenagers created by teenagers address everything from politics to current events and even pop culture.

The old adage of “don’t believe everything you read” holds true even in the digital age. A little bit of skepticism and a variety of reliable news sources will help you separate fact from fiction. Don’t be the victim of fake news.

Before automatically believing the latest viral “news” tidbit, check and check again before you believe it or share it. Here are some resources to help young people check for themselves. 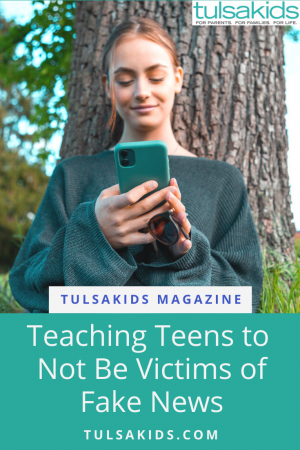