I didn’t fully realize what was happening in Washington, D.C. on January 6 till late in the day. I knew Betty was listening to a live stream in her office and that something significant was happening. However, it wasn’t until driving to pick up Joss and finally turning on NPR that I started understanding exactly what was going on.

It was at that point, around 4 p.m. CT, that they were interviewing a female senator. When asked where she was, she replied that she couldn’t give away her exact location. She did say that the senators had been removed to a secure place. You could hear them talking in the background, and I can only imagine what they must have been feeling at that moment.

On the drive home, I tried to explain some of what was going on to Joss, in simple terms. That there were people who didn’t want to accept that Biden is our next president. That refusing to accept the results of the election meant that they were saying that a person’s vote doesn’t matter. That Trump is primarily to blame, on account of his refusal to accept the election results.

I don’t know if he understood everything. Around the time of the election, we’d started talking about Trump and the voting process. I explained why I wouldn’t be voting for Trump. Now, he’ll randomly bring up things like, “It’s okay, I’m going to make a nice-inator gadget, and use it on Trump, so he’ll be nice.” Or “Maybe we need to buy Trump a Ninjago Serpentine Lego set for Christmas. Because those are the bad guys, so he would probably like it.” Sometimes it’s hard to know how to respond. But I appreciate that he can both acknowledge that someone has done wrong and want to help them get better.

Following the election, I bought a book from Eleanor’s Bookshop called “For Which We Stand: How our Government Works and Why It Matters.” It was written by Jeff Foster, an AP Government Teacher at at Marjory Stoneman Douglas. I’m hoping it will be a good way for us to learn – together – more about our government and how to participate in it. 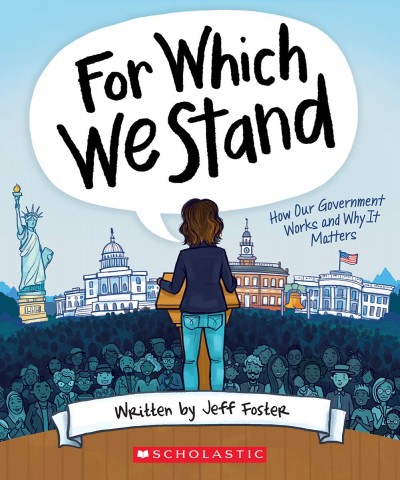 If you’re looking for resources about how to talk with your kids about the events of the day, here are a few ideas:

The OKC National Memorial sent out an email providing some talking points for classroom discussion. However, they could be used for parents as well. For example, “How do we reject violence in our daily lives?” Click here to see the email. And learn more about their Better Conversations program here.

2) Tips from National Geographic, “How to talk to your kids about the chaos at the Capitol”

Cassidy O’Brien, a therapist at San Diego Kids First, shares some helpful advice. She acknowledges how difficult it can be for parents to find “a balance between helping kids understand the world and not causing too much anxiety…” Key points include reassuring kids that they’re safe, explaining bad behavior and coping with kids’ anxiety. Read the article here. (You may need to provide an email address first.)

3) “Caring for Students in the Wake of a Traumatic News Event” from edweek.org

This article provides tips for educators in particular. But again, parents could gain insight. The first piece of advice is to “Investigate students’ emotions, without assumptions.” It also reminds adults that children can pick up on their stress and emotions, even if the kids aren’t aware of what’s going on in the news.

4) Good Morning America, “After deadly US Capitol breach, 5 tips to talk to kids and ease their anxiety”

The first thing that stood out to me from this article was, “ Use the news as a learning opportunity, not entertainment.” In other words, talk with your kids about what they’re seeing on TV, if they’re watching the news. Don’t just leave it up to them to interpret it. Start a discussion.

In his remarks on January 6, Joe Biden said, “The scenes of chaos at the Capitol do not reflect a true America, do not represent who we are. What we’re seeing are a small number of extremists dedicated to lawlessness. This is not the dissent. It’s disorder. It’s chaos. It borders on sedition, and it must end now. I call this mob to pull back and allow the work of democracy to go forward.”

I understand what he’s saying. But I also saw post after post on social media saying, “This IS America. We allowed this to happen.” And from Black writers, that this is exactly what they’ve been speaking out against for years. It’s just taking us all so long to wake up and admit it.

I have so much more work to do. A significant part of that for parents is raising kids who understand what it means to be a good citizen. And teaching them to strive for and love justice. Check out Kristi Roe Owen’s post on “Nine Things to Teach Kids for a More Just Future” for additional resources.

How are you talking to your kids about the events of January 6? What questions have they asked? 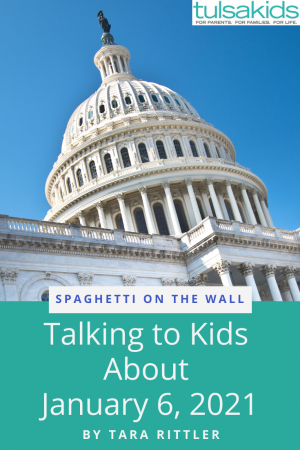