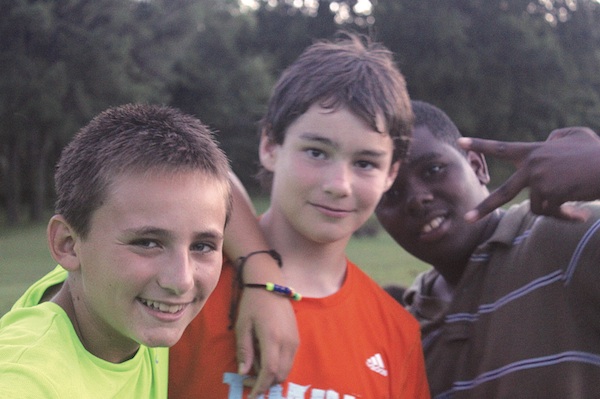 Summer camp presents first-time experiences for many kids: first time in a canoe, first time on a ropes course, maybe even a first crush. But for Joshua Campbell, the YMCA of Greater Tulsa’s summer camps provided his first true friends.

“I was six, so I was really nervous,” Joshua said about his first time at Westside YMCA’s summer day camp. “It was fun. It was really awesome, but I didn’t really have any friends back then.”

Joshua is 14-years old and an eighth grader at Dove Science Academy. He is on the autism spectrum and has “been bullied, picked on, looked down on and shunned over the years,” said his mom, Vicki Campbell. But in the seven years Joshua has been a YMCA camper, “he’s had a lot of positive changes—helping him become more social and getting some friends that he can actually call true friends,” Vicki said. “Truthfully, the people he spends most of the time with are adults. To have some true friends was a big first for him.”

Joshua began his camp journey at the Westside YMCA camp the summer after first grade. Vicki was apprehensive at first but knew Joshua needed a safe place to spend summer days while she was at work.

”Joshua used a communication book where he pointed at pictures until the end of his third-grade year,” Vicki said. “He was very hard to understand.”

Vicki worked with the YMCA staff, teaching them about how to best communicate with Joshua. Over the years, staff members would become some of Joshua’s mentors and confidants, but that first summer, a swim test experience showed Vicki the staff’s care and compassion for her son. Joshua was struggling to pass the weekly swim test that was required for campers to swim without a life jacket.

“Even though Joshua showed that he could do it in swim lessons, when it came time for the weekly swim test, he was unable to pass it as he did not believe in himself or have the confidence he needed,” Vicki said.

Nicole, the camp director, knew Joshua could swim. She got in the pool and swam alongside him, cheering on each kick, each scoop of water. Joshua passed the swim test.

“When I picked him up that afternoon, he was so excited that he could do it and has ever since, only because a YMCA employee took their time to work with him and encourage him, and with that he became successful,” Vicki said.

Lucky became Joshua’s nickname. When Vicki picked Joshua up from the Y on any given day, she could hear people say, “Lucky, your mom’s here!” The nickname stuck.

As the years passed, Joshua became more comfortable and was encouraged to attend Camp Takatoka, an overnight YMCA camp 45 minutes outside of Tulsa on Fort Gibson Lake.

“The first two days, I was pretty nervous, but I got used to it,” Joshua said of his week-long stay at Takatoka in 2014. “They weren’t going to give up on me like other people do. They encouraged me.”

Summer Knox, the camping services director and director at Takatoka, said Joshua fell in love with Camp Takatoka his first week there. He made new friends and overcame fears. He stepped outside his comfort zone, sampling new foods and activities.

“I watched him learn a lot of skills but at the same time learn to be more confident in himself—being confident away from his mom, being confident as an individual—I definitely saw that blossom,” Knox said.

This summer, Joshua will be back at Camp Takatoka, a place he now refers to as his “home away from home.” He already has plans to work at the camp in the future as a lifeguard and counselor.

“I grew up there,” he said of Takatoka. “That wouldn’t be cool if I pretty much grew up there and then didn’t have anything to do with it after I’m old enough not to go there anymore.”

Thanks to the YMCA camps and their staff, Vicki said she has seen Joshua transform from a child who was often quiet and alone to one who will try new things without as much anxiety.

“To this day, I believe we would still be struggling with many of the social skills relating to making friends, making eye contact, finding the courage to participate in new activities, and believing in himself and trusting others without the patience, understanding, love, and encouragement that the staff at the YMCA—Westside and Takatoka—have provided for him,” Vicki said.

The YMCA camps gave Joshua his first experiences tubing and water skiing, but more than that, Joshua received some of his first genuine opportunities for friendship and acceptance and unwavering encouragement.

“The best thing I can say about how the Y has impacted Joshua’s life is that he is learning—that as long as he tries, as long as he believes in himself, as long as he doesn’t give up, as long as he receives encouragement–he can overcome or achieve anything he wants to,” Vicki said.