Study Suggests Not All Screen Time is Created Equal

Screens. They’re the bane of every parent’s existence, or at least a significant point of contention. Regulating the use of computers, phones and video games can seem like, and often is, a constant battle. In addition, parents worry that all this digital consumption could have a negative impact on their child’s health and wellbeing. Fortunately for those of us raising kids in a digital world, scientists at Tulsa’s Laureate Institute for Brain Research (LIBR) have been hard at work investigating these very issues. Preliminary data is in, and the initial findings might surprise you.

LIBR is one of 20 research sites around the country involved in the National Institute of Health’s Adolescent Cognitive Development (ABCD) study. Close to 12,000 kids, including 743 from the greater Tulsa area, ages 9-10, are participating in the study, which uses advanced neuroimaging to observe brain development throughout adolescence. At the same time, the study is tracking a variety of factors (e.g., environmental, social, physical and behavioral) that can affect this development. One of the specific factors they’re tracking is amounts and types of screen use.

To assess screen use for this particular aspect of the study, participants responded to a series of questions about the amount of time they spent on screens and the types of screen activities in which they engaged. Researchers also collected socio-demographic data, along with information about family environment, emotional wellbeing, and other factors. Once this material was compiled, it was compared to the observations about brain development and structure gleaned from the initial neuroimaging “pictures” of the participants’ brains to see if there were any relationships that could be discerned.

“We are looking at what the associations are between how much time kids spend on various screen activities and some variables we care about. For example, how well are they doing in school? How well can they think through problems? How do they feel? Whether they are anxious or depressed. How many friends they have,” Dr. Martin Paulus, LIBR’s scientific director and president, explains. “It gives us a way of seeing if there are particular patterns that emerge that we then have to follow up.”

According to Dr. Paulus, although the study is still in its early stages, researchers at LIBR are already seeing some significant relationships between different kinds and amounts of screen use and various types of brain characteristics. For example, for those kids who engaged in a lot of screen activity, there is an association between screen time and imbalances in development between the frontal part of the brain, which is important for executive functioning or regulating your behavior, and the areas that are important for emotion processing.

While that finding is interesting in and of itself, Dr. Paulus and his team were also interested in seeing if any of these associations or patterns they found were related to behavioral, cognitive or other problems. What they learned might not be what you expected. Their findings suggest that, at least for this particular age group, all screen use is not created equal.

The research team looked at two types of problems: “externalizing” or problems with self-control of emotions and behaviors (i.e. anti-social and aggressive behaviors) and “internalizing” such as problems with being depressed or anxious. They found that kids who engaged in a lot of screen activities and whose brain images also showed a developmental imbalance between the frontal part of the brain and the emotion processing areas of the brain have more problems with aggression and emotional outbursts. They also appear to have more struggles with problem solving.

While those connections might not surprise many parents, the researchers also found that these same factors – a lot of screen time combined with brain development imbalances – did not seem to be associated with problems such as anxiety and depression. In fact, according to Dr. Paulus, there may even be some positive associations between certain types of “social” screen-related activities, like texting, and “good outcomes” like better problem solving and fewer mood and anxiety issues, at least for kids in this 9-to 10-year-old age bracket.

Dr. Paulus surmises that these screen activities, such as texting and messaging, are actually an expression of being social and an extension of engaging in friendship, which has many positive consequences.

“Don’t be too worried if your kid texts and chats with friends,” Dr. Paulus explains. “That’s part of regular social networking that helps the child grow up and have a community, because in this day and age, texting and messaging have become what might have been phone calls or letter writing in the past.”

While it’s still early in this study, researchers at LIBR are already gaining valuable insights from the preliminary data.

Much remains to be learned as the study continues and more data accumulates over time. Eventually, Dr. Paulus would like to use the study as a way to formulate practical advice and guidelines.

“I’m very interested in providing information that can translate beyond the clinical setting,” he said. “To answer that question, ‘Should I worry that my kids are spending too much time playing video games’ or ‘Do these things put my kids at risk for other problem behaviors like getting into alcohol and drugs.’ The beauty of this study is that it’s a data set that is available to lots of researchers now, so my hope is that others will continue to work on this and expand our knowledge. It makes the collection of this data really worthwhile.” 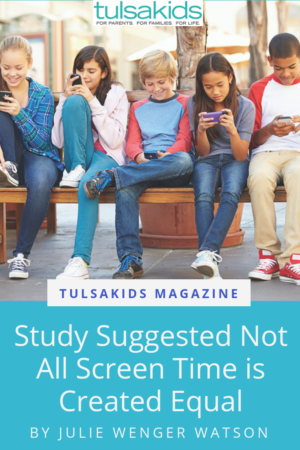