The Gateway to the West

If you’re a hockey fan, you no doubt heard quite a lot about St. Louis during the Stanley Cup finals when the St. Louis Blues won their first championship title. But, this Midwestern city has been famous for a whole lot more than hockey for a long, long time. Dubbed the Gateway to the West, St. Louis offers traveling families lots of fun choices from museums to history, food to architecture and more. If you do nothing more than head to the top of the Gateway Arch, ride on a Mississippi riverboat and spend time in Forest Park, you’ll leave St. Louis feeling much more than satisfied.

I always recommend observing a new city from a bird’s eye view to get the lowdown on the landscape. For starters, the most internationally recognizable feature of the St. Louis skyline is the Gateway Arch, rising above the city along the banks of the Mississippi River. Standing 63 stories high, the Arch is the tallest man-made monument in the Western Hemisphere and the tallest stainless steel monument in the world. Take a four-minute ride up the shimmering, hollow structure inside a five-seater tramcar, which propels people up to the observation deck, literally housed in the arch’s curvature. On a clear day, visitors can see 30 miles toward the east past the Mississippi River and toward the state of Illinois. Nighttime views are star-studded and extra sparkly, thanks to the city lights below.

Built in the 1960s and dedicated to the people of the United States by President Lyndon B. Johnson in 1968, the Arch was designed to acknowledge and honor our country’s westward exploration and expansion and pioneers such as Lewis and Clark, who led the expedition that began St. Louis in 1804. The Gateway Arch National Park (formerly known as the “Jefferson National Expansion Memorial”) is one of the most-visited tourist attractions in the world and is now on the National Register of Historic Places. The park spans from the federal-style Old Courthouse, where important freedom-based cases were tried, to the steps overlooking the Mississippi River. There’s also plenty to explore at the Museum of Westward Expansion.

Each year, from March through November, a wonderfully gentle way to admire the St. Louis skyline is on a Mississippi Riverboat cruise. Docked at the base of the Grand Staircase from the Arch, the riverboats disembark multiple times each day and night. There are two replica 19th-century paddle-wheel boats: one called Tom Sawyer and the other, Becky Thatcher (named after characters from Mark Twain’s classic novel). The trip makes you feel like you’ve gone back in time when these vessels transported goods and people up and down the river. Depending on your taste and timing, there are several types of cruises available for kicking back, including a short and sweet, roughly one-hour, tour; a detailed historic tour; a full-fledged, two-hour family-friendly buffet dinner trip with live music cruise; or a blues cruise, honoring the history of this musical genre.

Another St. Louis original that consistently receives top billings by visitors is Forest Park. St. Louisans are particularly proud of their park, which is home to outstanding attractions such as one of the acclaimed St. Louis Zoo (with over 17,000 animals), the masterpiece-filled St. Louis Art Museum, the out-of-this-world St. Louis Science Museum (with a planetarium and 4-story IMAX theater) and the Missouri Museum of History—-all 100 percent free to patrons any time of the year. Larger than New York City’s Central Park, 143-year-old Forest Park is jam-packed with gorgeousness and greenery and serves to bring people from all walks of life together.

Forests, streams and lakes—and even cascading waterfalls—-make this park the perfect spot for relaxation. There are beautiful walking trails with innumerous flowerbeds to admire. And you can take a six-mile bike ride along the park’s perimeter or a leisurely paddleboat cruise around Post-Dispatch Lake and the Grand Basin. For a quick and easy way to get around at a nominal fee ($2 for adults and $1 for kids), take the hop-on, hop-off trolley that stops at each of the attractions.

Evenings are a lovely time to sit and relax at the 12,000 seat outdoor amphitheater known as The Muny Theater, which serves up Shakespeare in May and June and then, later in the summer months, presents Broadway shows under the stars in its grand, 12,000-seat outdoor theater. More than 1,450 free seats located in the last nine rows of the theatre are free on a first-come, first-serve basis.

With all this great stuff to do, you probably understand why St. Louis makes the news beyond the Stanley Cup. With summer here, it might be the perfect time to take a road trip. In less than six hours, lessons about the pioneers and free access to city museums and attractions await. St. Louis is also a fun city for sports’ enthusiasts, and what might best punctuate the trip? Perhaps an all-American visit to a St. Louis Cardinals’ baseball game at Bush Memorial Stadium? And, while you’re at it, maybe give some fried ravioli, a St. Louis staple, a try.

When planning a trip to St. Louis, contact the Visitors and Convention Bureau of St. Louis (800.916.0040; www.explorestlouis.com). 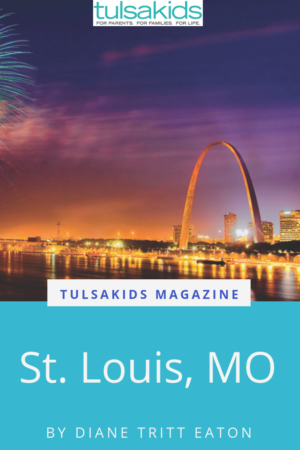