On behalf of Summit Public Schools, Brandon Lee (I don’t know what his role is at Summit – as far as I can tell, he’s a freelance marketing professional, but I have requested his title via email) responded to my last blog. He rightly points out that the Chan Zuckerberg Initiative is a philanthropic organization separate from Facebook. Priscilla Chan is Mark Zuckerberg’s spouse.  I have printed Mr. Lee’s comments in full below.

Regardless of his “corrections,” that fact remains that many parents and schools have pushed back against Summit Schools, not only because of concerns about privacy, but about the curriculum itself. I can find no third party, peer-reviewed studies or research that shows the effectiveness of Summit. In fact, the more schools that use Summit, the more there seems to be growing concern about Summit’s effectiveness. https://chalkbeat.org/posts/us/2019/01/17/summit-learning-research-harvard/

This article from EdWeek.org discusses the amount of money being spent and made on “personalized learning” with very little evidence of its effectiveness.

There are also continuing concerns about privacy. Some of the concerns may be found highlighted in the Parent Coalition for Student Privacy fact sheet.

The Parent Coalition fact sheet states, “Summit claims the right to collect an extraordinary amount of personal student information. Among the data points that they collect, according to their website, include student and parent names and their email addresses; student ID numbers, attendance, suspension and expulsion records, disabilities, their gender, race, ethnicity and socioeconomic status, their date of birth, teacher observations of their behavior, their grade promotion or retention, test scores, college admission, survey responses, homework assignments, and any extracurricular activities they engage in. Summit also plans to track students after graduation from high school, including college attendance and careers.

“Summit shares this data to as many as 19 corporate ‘partners’ including the Chan-Zuckerberg Initiative, to run their services, do research and help them improve their ‘product.’ In addition, several of the websites that students are assigned through the Summit platform track student data for marketing and advertising purposes, including YouTube. There is no independent oversight of Summit or its partner companies to ensure that they are using the data appropriately or securing it from breaches.”

The fact remains that Summit is not a resounding success in many schools and districts.  The Parent Coalition Fact Sheet says, “Parents have rebelled against Summit Learning in Boone County, in Kentucky; Fairview Park City School District in Ohio; Indiana Area School District in Pennsylvania; Clearwater County in Idaho; McPherson in Kansas and elsewhere. Because of growing parent and student discontent, some districts have completely eliminated the use of the Summit platform, including in Cheshire, Connecticut; several others have rolled back the implementation of the program or made it optional for students and parents, including in Pennsylvania and Wisconsin. Summit itself has reported that about seven percent of schools that have tried the platform have now dropped it, meaning at least 23 schools. Yet the actual figure cannot be confirmed, since Summit refuses to disclose which schools are using it and have offered inconsistent numbers over time about the extent of its reach.”

In addition, public schools have transparency and accountability, while the Chan Zuckerberg Initiative form of philanthropy chooses to function in a more opaque and unique way. According to Nonprofit Quarterly, the Chan Zuckerberg Initiative is an LLC, which means that it functions as a corporation, and “It privatizes the way these funds will be directed and minimizes the public’s control of how charitable dollars are spent.” Ultimately, what that means is that there is a lack of transparency and public oversight.

With this much controversy surrounding Summit, shouldn’t parents, educators and administrators be taking a closer look at it rather than blindly accepting its marketing hype? Is it the best, most effective way to educate the next generation? Should parents and educators put blind trust in Summit, hoping for the best outcomes? Are we willing to use our children as guinea pigs? 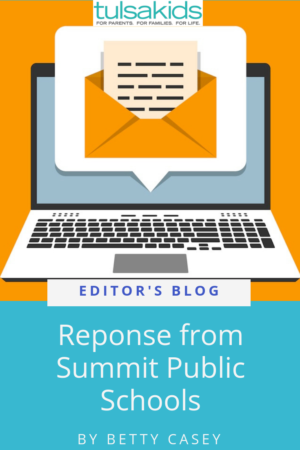