While I didn’t pull out my pearls on inauguration day, I was there in spirit to celebrate Kamala Harris, the first woman, not to mention Black and South Asian woman, to be inaugurated as Vice President of the United States. I didn’t want the historical moment to be lost in the midst of former President Trump’s pearl clutching over the lost election.

If you’re not aware of the significance of the pearls, I’ll briefly summarize. Vice President Kamala Harris’s college (Howard University) sorority, Alpha Kappa Alpha, refers to the sorority founders as its “Twenty Pearls.” Members are called “pearls.” As a supportive and proud gesture, much like Hillary Clinton’s Pantsuit Nation, several Facebook pages popped up encouraging women to wear pearls on inauguration day. Probably the most well-known organizer is Hope Aloaye, whose “Wear Pearls on Jan 20 2021” group gathered hundreds of thousands of followers across the globe. Vice President Harris is known for wearing her pearls and her Chucks (Converse Chuck Taylor sneakers).

Watching a woman being sworn into office by another powerful woman, Supreme Court Justice Sonia Sotomayor, was a powerful moment. I was fortunate to have parents who told me that I could be whatever I wanted to be. BUT (there’s always a “but”), their own marital agreement was for my mom to be a stay-at-home mother and my dad to work. I have always thought that my mom, who left the family farm in southeastern Oklahoma to live and work as a single woman in Tulsa, would have been happier having a job. She worked when she and my dad were first married – and childless – in Colorado. At that time, women were still expected to stay home once they had children, and I felt that expectation for me from my parents, even though they never said it. To really believe in myself as capable of achieving anything I might aspire to, I needed to see other women in those roles.

Girls, especially girls of color who have an extra burden to overcome, must continue to see women at the highest levels of business, service and government. It’s surprising that it took so long to elect a female vice president. It can’t be a once-in-a-lifetime moment, but rather one that opens the door for more women, for more diversity, more voices in all aspects of American life until it becomes normal. When we stop thinking of a female vice president or president as historical, when girls don’t give it a second thought, that’s when we will have true equality. This inauguration can’t be a one and done, but a first to build on.

I remember looking at my mom’s pearls. She very rarely wore them. I can’t say for sure, but I think she wore them at her December wedding with her winter white suit. It was at a small Presbyterian church in Colorado with only a handful of people – mostly my dad’s family – in attendance. While no one ever told me if those pearls were special, in my mind they were, with their two milky white strands and filigreed silver clasp. I have my own set of pearls given to me by my husband. While special, I’ll admit that I’ve always thought of pearls in a slightly negative way – the uniform of a debutante or elitist. Now I will feel comfortable wearing pearls with my Chucks and will pull them out on a more regular basis in honor of Vice President Kamala Harris — and women supporting women. 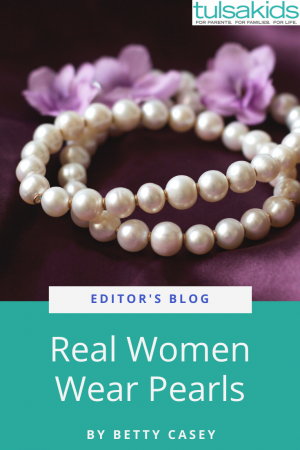