Broken Arrow Public School parent and teacher Keri Waits had an “ah ha” moment when she heard Robert Hudson, M.D., speak at the Broken Arrow Early Childhood Institute over the summer. Dr. Hudson is a clinical professor of pediatrics, University of Oklahoma School of Community Medicine and co-director of the Center for Resilience there. “He led an educational series on children’s temperament and behavior and how it impacts their school, home and social time. I remember thinking ‘ah ha, that is why Gage, my son, acts a certain way.’  It was empowering as both a parent and a teacher.”

Broken Arrow Public Schools, Dr. Hudson and the OU School of Community Medicine are collaborating on a longitudinal research study, utilizing parents and students in the four Broken Arrow pre-k programs to learn more about the early indicators of student success. The study will assist educators and parents in identifying a child’s learning and behavioral skills known as executive functions.

“When a child’s executive function skills are weak, the child struggles,” Dr. Hudson explained. “We have always thought this was a developmental issue.  Through the study, we have an opportunity to recognize these weaknesses in children and teach the skills necessary to help the child experience success in the classroom.”

“Dr. Mendenhall and Dr. Hudson had breakfast together and talked about using Broken Arrow pre-k students and parents for the study,” she said. “Dr. Mendenhall knew the study was timely because we were opening our early childhood education centers in the fall.”

As Dr. Dunlop and Dr. Mendenhall discussed Dr. Hudson’s idea she, like Waits, had an “ah ha” moment. “I thought, boy, I really wish I had had the opportunity to learn about my son’s executive functions when he was younger. Everything we were talking about made me realize the benefit of that kind of study to parents, teachers and a child. I know if I had that information, it would make my son’s current middle school experience better,” she said.

Dr. Hudson said Dr. Mendenhall is always looking for innovative ways to improve education in the Broken Arrow school district. “Both Dr. Mendenhall and Dr. Dunlop are eager to do it right and do it better and have the best school district,” he said. “They realized my passion for understanding young children. A child’s temperament traits are present at birth and usually do not change after around 18 to 24 months of age. Sometimes we do not go about educating them in the optimal way that matches the new neuroscience on how the brain works. I believe we can predict how a child is going to work in the classroom long before people think it is evident. This type of study has never been done on children so young.” 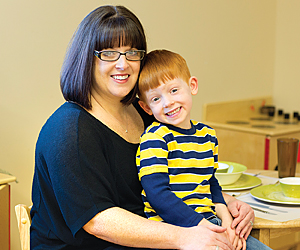 “He discussed how people are wired and how that wiring sticks with us for life.  Each trait was discussed as well as ways for teachers to handle a child with particular traits,” said Diana Beaulieu, director of Elementary Instruction.

Once school began, teachers were more aware of their students’ temperament and behavior and how it affected their classroom work and social interaction, Beaulieu said. “Knowledge is power. The teachers now have tools to help handle different behavior patterns. Children are all different and we must learn how to help each one excel.”

Dr. Hudson acknowledged that it is much easier for instructors to teach as if all children are the same. “The reality is that all children are very different. Executive functions are all precursors to behavior and learning. But this is not the way education has looked at early childhood,” he said. “Most educators measure a child’s experiences to see if they are ready for school, but that type of measurement does not tell us how that child is going to succeed in school. Wouldn’t educators better serve the child if they knew a child’s executive function skill set and how the child is wired?”

Being armed with information about each child’s executive function skills, parents and educators could work together to create a home and school environment that would support the child learning to his or her highest potential.

In the fall of 2013, parents of children attending BA’s early childhood centers were invited to attend a meeting with Dr. Hudson. He explained the study and how they and their child could be involved. Each site, said Beaulieu, was standing room only the night of the meeting.

“The attitude the parents brought to meeting was positive,” she said. “We emphasized to the parents that by participating in the study, they have an opportunity to understand how their child is wired and how that affects their classroom performance. Many parents said they had seen their older child struggle in school and did not want that for their second child.”

Currently over 200 parents have signed a consent form to participate in the study. Parents now must go online to a website created by Dr. Hudson to fill out a temperament and behavior trait survey on their child.

Waits said the survey takes about 30 minutes to complete. “The questions are situational like ‘How does your child respond when’ and you choose from  multiple choice answers.”

Dr. Hudson and a team of graduate students from the OU School of Community Medicine will evaluate the surveys. “At this point, about 25 percent of the parents who have said they will participate have begun to answer the survey. Once the parents and teachers have completed the assessments, we will compare their results,” he said. “One thing that is interesting is parents do a better job assessing their child’s behavior and teachers do better observing a child’s learning patterns. Both perspectives will paint a true picture of the child. Some children do not have trouble at home but have trouble at school or the opposite.  With both input, we can help the child.”

After all evaluations are complete, Dr. Hudson will hold a parent workshop to discuss the results.

“Each parent will have a printout of the child’s results. As Dr. Hudson discusses each temperament and behavior subject, parents can see, with the results in hand, how their child performed on that part of the survey. He will give the parents the tools to help manage and strengthen any weakness in their child,” Beaulieu said.

“My vision,” Dr. Hudson said, “is if we can predict problem areas, we can intervene and help earlier. Now they put labels on kids such as, ‘He is a young 4-year-old’, or ‘He is a boy’, or ‘His parents are having issues’, or ‘He is going through a phase.’ Several years later, if the child is still having problems, we know it was not a phase. Instead, the child had at-risk executive function traits. If we wait until a child is 7 or 8, we have missed out on three years we could have helped and not subjected the child to adversity, struggles and suffering.”

Waits anticipates the results will give her needed guidance to help her son be successful. She has already learned that he is very focused and has difficulty stopping an activity or transitioning to a new one, so now she uses a simple technique to help him make transitions.

“This will give me a starting place to build on,” Waits said. “I am hoping that by knowing how he ticks, I am going to know how to help him be more successful and cope with those triggers that are his downfall. He is very persistent. He wants to finish a task, and it is hard for him to walk away. We now set up a timer for him and say, ‘In two minutes you have to put your work away, and we will finish it later.’ I learned that method in Dr. Hudson’s Summer Institute.”

Teachers will receive the same survey analysis on student participants as the parents. Dr. Hudson will work directly with teachers to help them understand particular personality traits and risk factors and how it affects a child’s classroom performance. 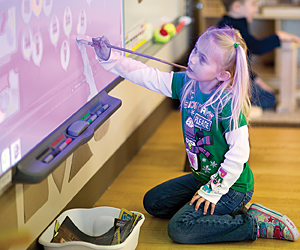 The information, said Dunlop, will be as private as a parent wishes. “We respect that some parents might want to keep the results private, but we are hoping parents share this information with their child’s teachers throughout their education. They can take the information to parent/teacher conferences or on to the child’s elementary or middle school and share it with their teachers.”

My hope, Beaulieu said, is that parents become advocates for their children.  “Success is communication between parent and school. If parents have information that can help a teacher, they should set up conference time and share the information. Parents can tell a teacher what they know will work for their child. It is helpful.”

Dr. Hudson believes the results from the longitudinal study can also help the Broken Arrow administration learn to sort students for appropriate classroom personality makeup. “We can make sure one teacher does not have 10 students with certain difficult personality traits and another teacher only have two students with that trait,” he said. “Perhaps we can create a balanced classroom environment for the teacher by recognizing each student’s personality traits.”

In order for the study to continue into subsequent years, increased funding will be necessary. Currently, the pilot program is being funded through a grant from Blue Cross and Blue Shield and a private foundation. Both Dunlop and Dr. Hudson are pursuing grants, so next year’s Broken Arrow pre-k parents and students can participate in the same study.

“We do need the funding to make this long term. Either way, it will be beneficial to all involved. Even without funding, we can still track the students. If we see the study is making a positive change in the way we teach and work with our parents and students, we will find a way to continue it,” Dunlop said.

Dr. Hudson sees the study as far-reaching for schools and families. “Some parents do not have the expendable income to seek help for their children. Our school systems’ responsibility is changing.  A lot of things that used to be done at home with children are not being done. Today we might have a kid who can do calculus but cannot have a conversation with a peer. If this is the case, we have failed that kid. Broken Arrow wants to be on the cutting edge on how neuroscience meets education.”

“Most importantly,” Dr. Hudson chuckled, “These 4-year-olds will be out in the world in 20 years running this place.”