When my daughters were seven and eight they came to me and, with the oldest as the spokeswoman, explained that they loved animals so much they would like to no longer eat them. They wanted to be vegetarians; their arguments were well thought out and articulated for such young children. It didn’t take me much deliberation to agree, but I’ll admit, part of my quick acquiescence was based on the assumption they wouldn’t stick with it very long. An invitation to our Sunday family dinners would tell you how wrong I was, twenty-three years later one daughter is still a vegetarian, and the other is now a vegan.

When my daughters became vegetarian, it was the early 1990’s, and Tulsa didn’t have a Whole Foods, Trader Joe’s or Sprouts. Although it’s hard to imagine a world before Google existed, it didn’t come into being until 1998, so I was on my own trying to figure it out. I was not well informed of the choices available for vegetarians so I did the only thing I knew, I omitted the meat from our diets. Unfortunately, I tended to substitute starchy, carbohydrate-laden foods and, in case there’s a doubt, I’ll give you the insider scoop: pasta, breads and chips do NOT make for a healthy vegetarian diet! People assume vegetarian is synonymous with healthy, but it’s very easy to be an overweight, unhealthy vegetarian. When it became obvious my children were not doing this on a whim, it was an ethical decision for them and they were in it for the long haul, I knew I had to figure out healthier alternatives and did eventually figure out some good meat substitute products and added more beans, vegetables and dark greens to our diet.

Although I still occasionally ate meat when I was at restaurants, I honestly didn’t miss it at home at all. In fact, I had never enjoyed cooking meat, and it was almost a relief not to do it. I was a single mother for most of their childhood, but when I remarried, my husband knew we were a vegetarian home and he was fine with it. Like me, he ate meat occasionally at restaurants but didn’t care that much one way or the other and was supportive of the kids’ dietary choices.

I received a lot of pushback from other people in their lives, but I steadily maintained my support of their right to make that decision. It was a right I not only supported over the years but a conviction I have greatly admired. As adults they continue this lifestyle, and now my oldest daughter has begun her own family. I was wondering how she would handle this with her child, so I asked her a few questions.

Me​: Do you plan to raise your kids as vegetarians?

Alexandra: At home we continue to prepare vegetarian meals. Our son is only a year old, so he eats off of our plates at restaurants as well. As he gets older what he eats will become more of his own decision.

Me: Are you or your pediatrician concerned about them receiving proper nutrition through a vegetarian diet?

Alexandra: As far as nutrition goes, he eats a variety of food and is growing and developing appropriately; we do not have concerns and neither does his pediatrician.

Me: How will you feel if your kids eventually decide to become carnivorous?

Alexandra: We are realistic in that at this age he is only a vegetarian because we choose his diet; as he grows up he will make his own decisions and we will encourage him to be conscious in his decisions about diet.

There are a few cautions for vegetarian/vegan families according to the American Academy of Pediatricians. Vegetarian and Vegan breastfeeding mothers need to make certain their babies are getting enough iron and recommend feeding an iron-fortified cereal at 4 to 6 months. Vegan breastfeeding mothers may need to take Vitamin B12, the main vitamin that is difficult for vegans to get without supplements. This blog is in no way meant to be a guide; please do your own research when making your decisions and if you plan to raise your child vegetarian or vegan, consult with your pediatrician or a dietitian to ensure your child is receiving all the proper nutrients.  It’s a more widely accepted choice than it was when my kids became vegetarians 23 years ago, and there are many wonderful products and great information easily accessible. Bon Appetit! 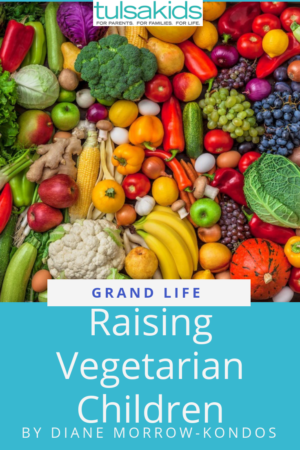