I love, love, love having a Philbrook membership. Philbrook has fantastic events and programming for families, the gardens are gorgeous, and it’s just a five-minute drive from our duplex. This means that making a last-minute decision to attend an event is easy. Even with timed tickets, I had no problem reserving two tickets for Joss and me last Friday afternoon for an event being held later that evening: Chillbrook Weekend.

After reopening their gardens earlier this summer, the museum began hosting Sprinkler Saturdays. Basically, they have sprinklers set up on the lawn, and kids can play in them while their parents picnic on the grounds. We went a few weeks ago, but our sprinkler time was cut short because Joss was being too wild with the water. However, they’ve also had swings installed throughout the gardens, so we still had a great, relaxing visit.

This past weekend, however, they upped the appeal of sprinkler play by adding a UNICORN SPRINKLER! I’ve been longing for an opportunity to play in a unicorn sprinkler ever since I first saw them a summer or so ago. Now was our chance! 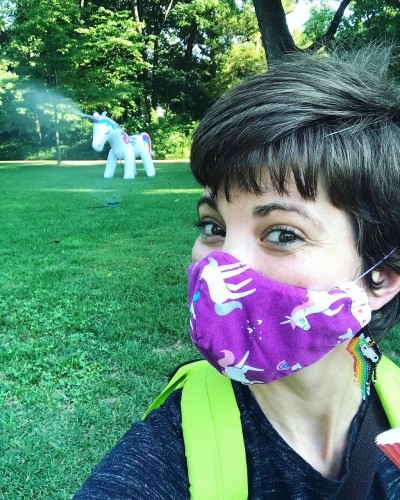 So we headed to Philbrook Friday evening around 6, anticipating a very good time. And it was even better than we imagined! First, they had a Frio’s popsicle stand set up outside the gate. So of course we had to purchase a couple pops. Then, inside, they were handing out ice-cold water and free bubble wands! What?!

So we took our new bubble wand and popsicles over toward the sprinkler lawn, only to discover that not only did they have a unicorn sprinkler, there was a giant, adorable monster sprinkler as well! 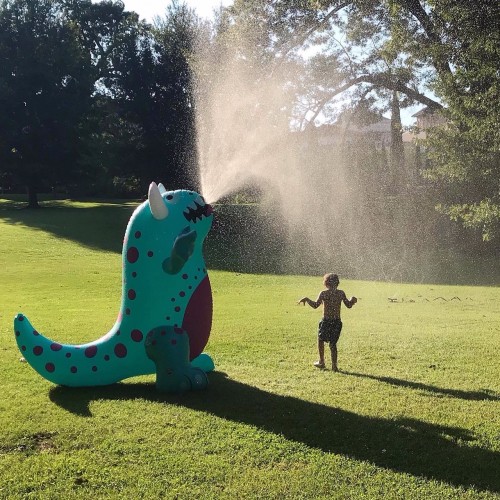 Even though there were several other families present, it was easy to stay socially distanced.

After playing in the water for awhile, we decided to check out some activity happening on the top of the hill. Turns out, it was a bubble station! But not just any bubbles – GIANT bubbles! Kids could make their own bubble wands out of a dowel rod (if that’s the correct term!), pipe cleaners and beads. But they also had badminton rackets for producing lots of mini bubbles and some extra-large bubble makers. 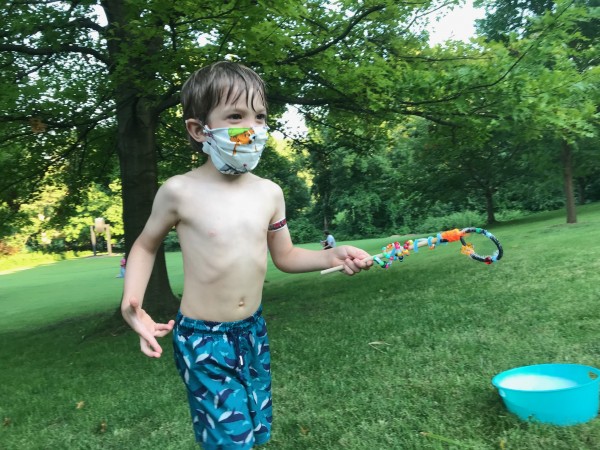 I hope you understand just how relaxing and satisfying it is to play with giant bubbles. When we first arrived, it was a little slow, but eventually several other families were spread out on the lawn, all making bubbles. The adults probably enjoyed this just as much as the kids. (I know I did!) 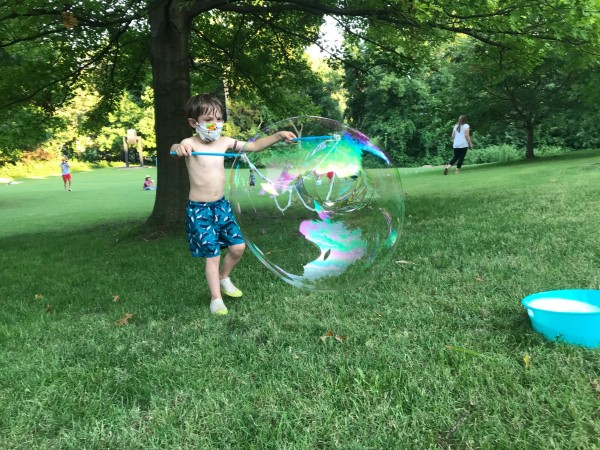 Besides bubbles and sprinklers, there was also Friday Night Garden Yoga with PRESS going on. This is a separate ticket ($10 for Members, $12 for Not-Yet Members) and will meet the remaining Fridays in August. We didn’t participate, but judging from the number of people arriving with yoga mats, it is a popular event.

Sprinkler Saturdays will at least last through the end of August. I don’t know whether or not they’ll bring back the bubbles and Chillbrook Weekend. The staff working the bubble station said this past weekend was kind of a trial run. It certainly seemed like a success, so I hope they make a return appearance! 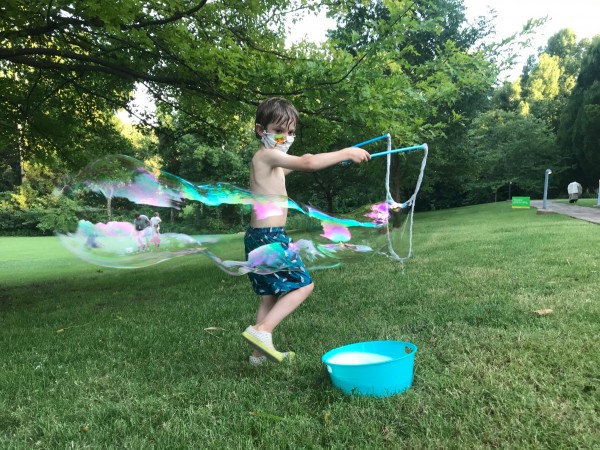 In substitution for Philbrook’s regular Summer Movie Nights, the museum has been hosting movie events at Admiral Twin. The next one is this Thursday, when they’ll be showing PeeWee’s Big Adventure! A childhood favorite. Learn more and purchase tickets here.

Currently, only the Gardens are open. However, follow @philbrookmuseum on social media for updates. 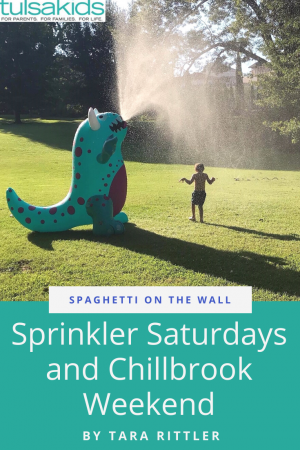