A few weeks ago, I wrote about how one of my kids caught head lice over spring break. I nuked the little buggers and dutifully washed all of our bedding. At the two-week check, I found that–as predicted by my friends would likely happen–the problem either hadn’t been eradicated completely or Lucy was getting it from a kid at school, so I went a little more academic with it and read a few articles. For me, a few articles is several dozen.

We hit all the kids with a mixture of coconut oil, tea tree oil, and lavender. But every two to three days for the following weeks, I have checked the kids’ hair and combed through with conditioner. Why conditioner? So anything at all will be visible.

It hasn’t been, but I don’t plan to stop until I am absolutely positively certain I won’t have to nuke everyone again because chemicals are gross.

In those weeks, we’ve been out in public, sat in restaurants, and–shocker–sent our children to schools. We even had Lucy’s birthday party.

What none of the articles I read talked about is how absolutely freaking bananas many people we know would get over it.

One friend who had given us a ride recently paranoically washed everything she owned, vacuumed her car, and then nuked her own hair when she found out I had been treating Lucy.

People recoiled in fear and loathing, canceling plans and generally losing their ish.

The reactions from people we know and love were fairly triggering for me because of my own mother’s predictably shaming and abusive reaction when I, like nearly every other child ever to exist in human history, caught head lice at one point. I knew we’d done what we needed to do based on everything we’d read, and I knew academically that it’s incredibly common–as many as 12 million kids in the US catch it every year. I couldn’t wrap my head around the response from so many otherwise reasonable people.

The only people who didn’t completely lose their ever-loving minds were other moms, who offered up suggestions, empathy, and appropriate booze recommendations to pair with a good lice combing.

“Wash your brushes, comb it out, no big deal,” offered some of the same women I’ve seen completely wig out over a solitary spider.

Justin was taken aback at the overreactions from older folks in particular. Is it generational? He wondered. Was there some flesh-eating lice epidemic that struck the Baby Boomers and now they all had lice-related PTSD? Was there an airborne typhus-carrying louse on the loose during the Cold War? Maybe it was the Russians, we speculated.

I speculated that maybe it’s because we live in reactive times and it’s hard to sort through all of the static to get to real facts. Or maybe they have post-traumatic lice disorder, which could be understandable.

My radio personality friend Bill had a much more plausible–and reasonable–suggestion. He noted that in general, people–especially Baby Boomers–tend to take information that was passed down to them unquestioningly. He confided to me that he realized he hadn’t known anything about how lice were really spread until I shared this article from a fed-up nurse.

Here’s What You Need to Know

Here in the Coffee Nebula, we are huge believers in empirical data. We believe in reading and understanding peer-reviewed science and living by it, science such as these 2015 updated recommendations from the American Academy of Pediatrics for dealing with head lice. And because I’m pedantic as heck, I have a burning need to educate everyone about this.

TLDR it’s time for everyone to generally calm the H-E-Double-hockey-sticks down about head lice. Here’s what you should know:

1. It’s nothing to freak out over.

I get it. It’s bugs, and bugs are gross, especially tiny ones in your hair. But they’re also easily addressed if you treat everyone and keep checking them. If you follow the directions and follow up for a few weeks by continuing to check everyone, it’s more of what I’d categorize as a minor nuisance than anything.

Sure it’s frustrating and annoying, but on the scale of “misplaced shoe” to “brought something they found in your ‘adult drawer’ to school and showed the principal” (2016 was a weird year), it’s a PNF (Parenting Nightmare Factor) score of “Netflix is down for several hours of updates.”

Just your pride and possibly social life depending on how big of spazzes your circle is. After all, people have been dealing with lice for 10,000 years.

3. It doesn’t mean your kids are Pig-Pen.

As this super helpful CDC breakdown points out, anyone can get head lice no matter what their hygiene practices are. The struggle has been shared by parents everywhere, including Heidi Klum.

4. You don’t have to quarantine your family.

According to the CDC and the AAP, if kids are found to have head lice, it’s completely fine to keep them in school for the rest of the day, treat them that night, and then go about your business as usual, including sending them right back to school the following day.

You’re thinking of fleas. Sorry to dash your dreams of a tiny lice carnival with a trapeze. They also can’t fly.

6. They are not all that easy to get.

If they were, every school teacher in the world would constantly be battling head lice. In fact, you can only get them two ways, by direct head-to-head contact or by sharing a hairbrush, hat, helmet, etc.

In point of fact, according to the nursing journal Pediatric Nursing, transmission via “hair care items” is considered a “very small theoretical possibility” among medical experts due to the fact that “these insects are likely to be dead or injured.”

But don’t take just their word for it. According to the CDC:

“Head lice are spread most commonly by direct contact with the hair of an infested person. Spread by contact with inanimate objects and personal belongings may occur but is very uncommon. Head lice feet are specially adapted for holding onto human hair. Head lice would have difficulty attaching firmly to smooth or slippery surfaces like plastic, metal, polished synthetic leathers, and other similar materials.”

So basically, off of someone’s hair, lice are as wobbly as your Auntie at Thanksgiving.

7. They can’t survive without a person to munch on.

The little ones can’t make it more than a few hours off a human host, while adult lice are lucky to make it a day, according to the CDC. And eggs can’t hatch below human body temperatures.

So even if someone with head lice sits on your sofa and a louse falls onto it and that louse is able to magically climb back up onto your scalp along with a mate like tiny Adam and Eve, it has to manage such a feat within a day.

8. Ipso Facto, if your kid got it, they most likely got it from touching heads with another kid.

When Lucy first got lice, I was sure they were hanging out in the sand she buried herself in at the park. But now that I’m more educated on the subject, I know she only got lice by either putting her head on another kid’s head or sharing one of her headbands with someone. Anyone who knows Lucy knows this is entirely on-brand.

It also explains why despite the fact that all of our kids regularly hang out on our bed watching TV or using their tablets while I’m working, neither Justin nor I got lice. We got a generous infestation of crumbled cookies all over our mattress, but not lice.

It’s worth noting that according to Pediatric Nursing, “one study found live head lice on only 4% of the pillowcases used by an infested person.” That’s still high enough odds to warrant a good laundering, but not high enough to go full Monk over.

They are tiny vampires but also discriminating ones. They’re after your kid’s 2012 Vintage AB Positive with subtle notes of playground dirt and Capri Sun, not the MD 2020 your pug Dr. Snausages has to offer.

10. The clothes dryer will kill them all so hard.

Don’t throw your kids in there. But any questionable clothing, bedding, etc., can be washed and dried. Lice can’t survive high temperatures.

11. There is a place you can drop a couple Benjis and magically clear everyone up.

If the idea of coconut oil and lice combing makes you cringe and despair and if you’ve got the spare dough, there’s a clinic where you can shell out around a bill seventy-five per kid and have someone else address the problem with immediate and lasting results.

12. If you freak out over lice, you are only hurting your kids.

Here’s a hypothesis. Maybe the reason behind all the lice panic is that it’s passed down from watching adults piña their coladas over the little devils when they were kids. Imagine an infinite mirror scenario of generation after generation of my ancestral lineage going all the way back to the Marquise de Maintenon* wherein parent after parent completely derped out when little Johnny or Louis Auguste picked up a few nits while lollygagging with the milliner’s children.

If you sequester the kids needlessly, there is a good chance you’re going to make them feel ashamed…ashamed enough that they’ll probably shame someone else in turn down the road.

But surely you should avoid hugging them, right? No way! That’s messed up. Kids need hugs. If they’ve been treated, they’ll be fine. You’ll all be fine.

What to Do if Someone You Know Gets Lice

If you should learn that your kiddo or kiddo’s friend has head lice, keep your wits about you for heck’s sake. Don’t panic and Lysol your entire house because, frankly, it’s not necessary and wastes valuable time you could be using to watch steamy Jamie and Claire lovemaking seshes on Outlander.

Simply check everyone’s head. If anyone has bugs, just go to the store and buy the treatment. Pick up a glass of wine or some chamomile tea to get you through the combing. Change the bedding and wash your hairbrushes just to be safe. Check again in 9 days–even my almost-daily checking is overkill.

And if you’re still suffering from crippling anxiety over it, remind yourself that there are far greater horrors in the world to be concerned about like the ever-widening wealth gap and the proliferation of nuclear weapons.

Actually, maybe you shouldn’t do that.

If you’re still suffering from crippling anxiety over it, remind yourself that somewhere in the world, baby goats are wearing pajamas.

Demystifying Pediculosis: School Nurse Taking the Lead
Lice Outbreaks Are Harmless
Why You Shouldn’t Freak Out Over the Invasion of Super Lice

Did I give you any new lice info? What’s your head lice story? Leave me a comment below, and as always, thanks for reading and have a beautiful week. 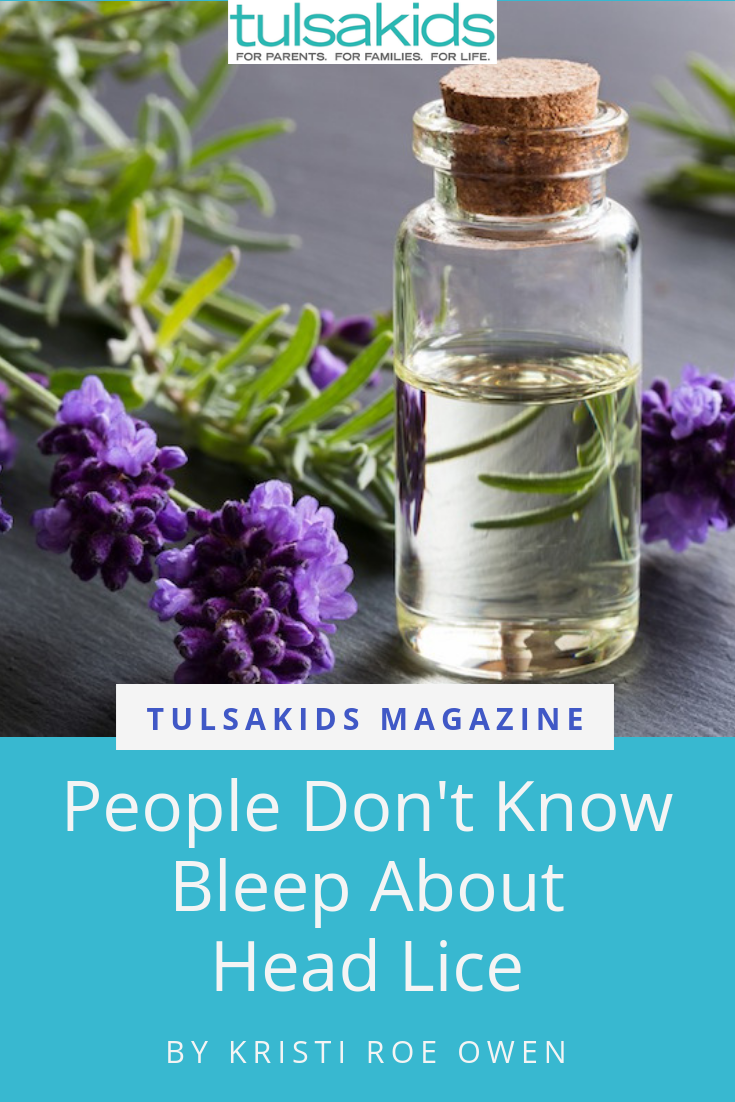