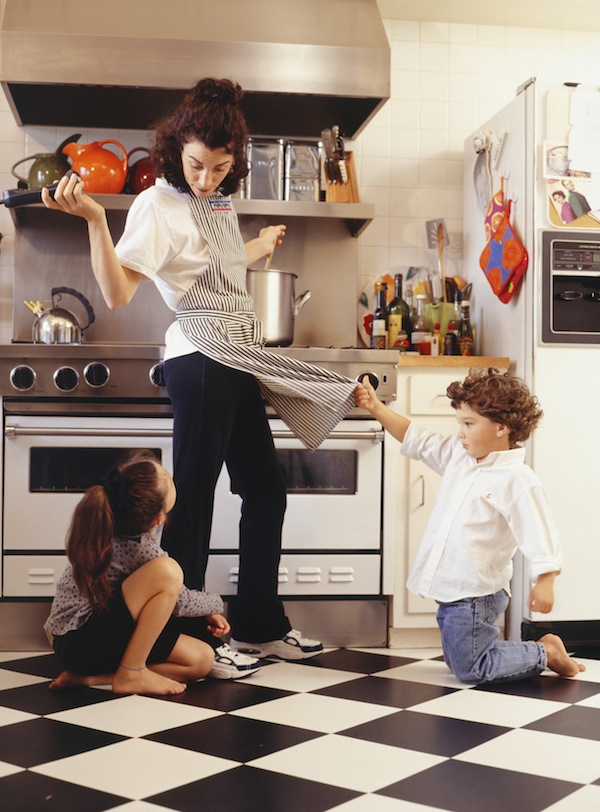 I think it’s harder to be a single parent when you have two or more kids because you’re outnumbered. It’s easier to be a single with a single, the one on one scenario being ideal. Having an only child would also eliminate about 90% of what I seemed to spend my time doing, refereeing squabbles and making sure my time, love and their peanut butter sandwiches were divided equally. As the sole parent, I often felt torn in two ways and physically and emotionally depleted. I longed for another adult to occasionally give the kids a bath, break up a fight or read bedtime stories.

Then there were the times there was just no way to make everyone happy and I made some decisions that were so bad they have become family lore. Like the time my girls were three and four and I took them to Journey through the Bible. If you missed this attraction in Tulsa, it was a well-intentioned but all too realistic walk-through 3D version of stories from the Bible. My four year old was enthralled and loved every second of this 30 minute animated Bible story. My three year old was terrified, clinging to me like a koala bear when the snake in the Garden of Eden came to life and crying with her face buried in my neck as the people left behind in Noah’s Ark story screamed for help (I admit I was pretty disturbed at this point also). When we emerged back into the lobby my four year old begged to go again while my three year old was having a total fear induced melt down. A sweet looking family of five had been in our tour group and offered to let my oldest go through with them. While I attempted to comfort my youngest, I let my four year old daughter go off with total strangers into a dark exhibit. I get chills thinking what could have happened.  In an effort to make both kids happy I made a pretty risky call that fortunately, had no tragic results.

There were so many other times one kid didn’t get to do what they wanted because the other didn’t want to and there was not another adult to help out. Silver Dollar City was an example of a single parent being pulled in two ways. My daughters have very different personalities and that really comes to light at an amusement park. The oldest daughter wanted to ride everything and anything, no fear. The youngest was pushing her safety zone to go on the merry go round. When there are two parents, it’s possible to divide and make everyone happy but in my case there was no other parent so we had to find a middle ground. Sometimes, the oldest just didn’t get to ride what she wanted and sometimes the youngest had to be a bit braver than she wanted to be.

The amusement park compromises were a preparation for many of the trade-offs my kids learned to make. They didn’t always get their way, they had to learn to be empathetic to their sibling’s point of view and learn early on that life is about a lot of give and take. These aren’t things that only pertain to single parent families, all children with siblings learn these lessons, but with kids of single parents they are more frequent. Sometimes I felt bad that they both had to do things they didn’t want to do and they both had to give up some things they would have liked to do but I like to think they turned out to be loving, giving people despite of, or maybe because of, their skills in negotiating and compromising.

What are your experiences? I’d love to hear from single parents of only children. Are there specific things that make it harder to be a single parent of an only child?