Hello lovelies! This week, I’ve invited a friend to the nebula to share some thoughts and advice on teaching kids about protest and Pride. In addition to being a devoted parent, Fernande is a talented writer, poet, and activist. We’re so happy to welcome them to our Nebula this week and wish all of our friends, family, and neighbors a beautiful Pride!

Most people think of PRIDE only as a colorful parade, associating this annual party with rainbows, glitter, colorful outfits, and cute same-sex displays of public affection. As a parent of three children used to attending this yearly celebration, my children look forward to the face-painting, temporary tattoos, bright colors, sparkles, music, dancing, and people-watching they get to do.

It’s certainly a fun time for all of us; my babies walk away with lots of free stuff (colorful beads, pride flags, toy unicorns, rainbow-colored sports balls), tuckered out from an afternoon of running around and dancing. I walk away with a feeling of connectedness and belonging after seeing my friends and chosen family in the LGBTQ+ community celebrating our true identities. 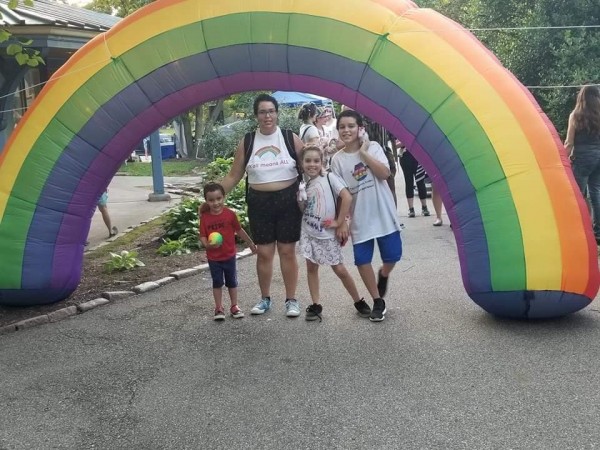 Of course, other people see PRIDE as a day of debauchery, where scantily-clad abominations revel all too publicly in their sin. There is a long history of individuals, businesses, religious institutions, and even governments viewing LGBTQ+ folx in this way: as sinners; as an abomination; as something to be ashamed of and hidden away. I was raised in this tradition.

My earliest memory of a non-hetero celebrity was Ellen DeGeneres coming out on her show. I didn’t watch the episode, but my parents talked to me about how homosexuality is an abomination. As a result, I didn’t come out as bisexual and nonbinary until well after I’d had my own three children, now 11, 9, and 5 years of age. As I have watched my children grow in Tulsa, I have made an enduring commitment to raise my children differently than I was raised. But, what does this mean?

It means I want my babies to grow up knowing and understanding LGBTQ+ identities, so that they can both accept LGBTQ+ people in their lives, and so they have the room to figure out their gender expression and sexual identities without fear of my disapproval. It also means I want my children to grow up with knowledge of pressing social issues, including racial injustice and the effect of White Supremacy on Black and Brown lives.

To do this, I have conversations with my children – who are lighter-brown AfroLatinos – about systems of oppression that affect both them and their friends and acquaintances. We even talk about what racism and transphobia and homophobia might look like in their classrooms and strategies for addressing it, so they can be prepared to do something about oppression and discrimination when they see it. 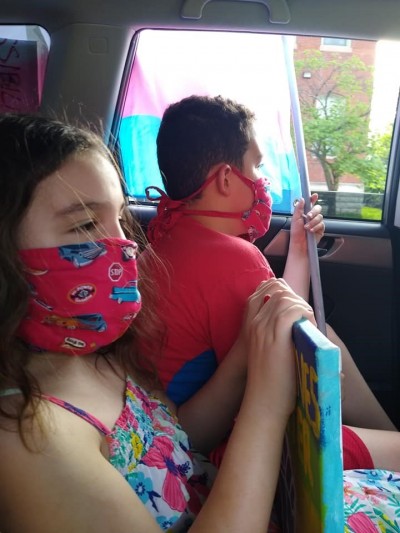 This commitment I have to raising my children differently also means that I take them to protests against injustice and oppression. Of course, I get their consent before taking them along; I never drag them to something they don’t want to do. The fact is, most children are naturally empathetic and justice-loving. When they learn of people being wronged, they want to see the pain made right and the conflict resolved. 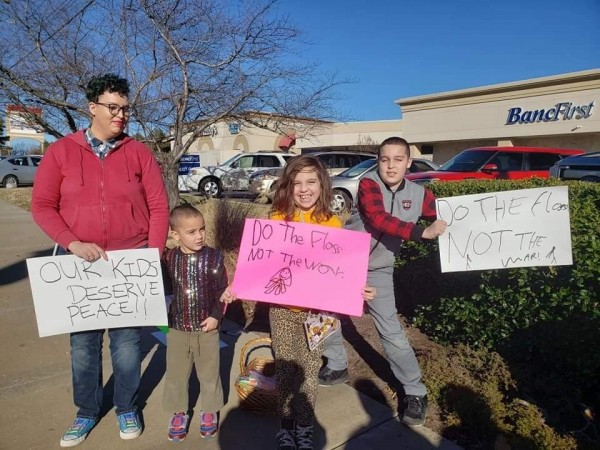 This is what most of us teach our children when we instruct them on how to apologize for hurting others. So, my children have been to the Tulsa Women’s March, a protest against I.C.E, another protest against the separation of immigrant families at the border, an anti-war-in-Iran protest, and most recently, a pro-Black Trans Lives Matter and anti-police brutality protest called “Pride is Canceled.” 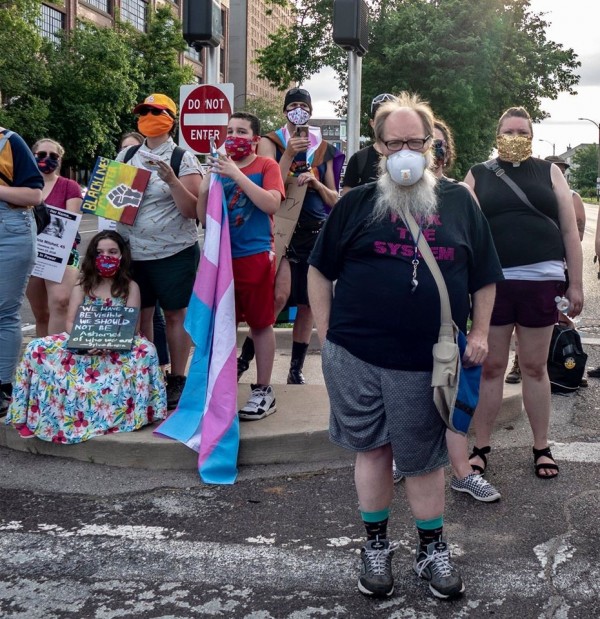 PRIDE and Protests go hand-in-hand because the first PRIDE in 1969 was actually a protest against police brutality and discrimination against gay and trans individuals at a bar in New York called “Stonewall Inn.” For the LGBTQ+ community, the celebratory nature of PRIDE is not our focus right now. Instead, we must focus on securing equality for our Black Trans and Queer family who are dying at disproportionate rates, often at the hands of law enforcement officers ill-equipped to protect us. There is a long legacy of injustice in this country against Black, Brown, and LGBTQ+ folx. I want my children to know about it so that someday soon they can work toward a future free of inequality and injustice, and full of hope, love, and freedom.

If you read this far and my words have resonated with you, you may be wondering how to have these conversations with your own children. These seem like very complex, heavy concepts that even fully grown adults have trouble grasping and communicating; how can young children be expected to “get it”? And how can these concepts be conveyed in an age-appropriate manner?

One lesson my children received about unpacking White and Hetero privilege came from my oldest child’s former elementary teacher at Eisenhower International School based on the classic lesson taught by Jane Elliott originally in April 1968. My oldest son’s teacher used two different colored wristbands instead of the blue vs. brown eye color Elliott used, but the lesson was the same: one half of the room got all the privileges while the other half got all the restrictions. Then after a while, the groups were switched, so that all the children in my son’s class were confronted with what it felt like to be oppressed and what it felt like to have privilege.

Read about this experiment and try a simulation with your own child or children. It makes children aware of what it feels like to be without privilege, and what it feels like to be born with privileges they didn’t ask for. Both feelings are powerful, and difficult, and painful, and both need to be addressed. I firmly believe pleas for empathy are the most effective in teaching young children. You can read more about this experiment here.

Another issue I have discussed with the children is the school-to-prison pipeline, which often rears its ugly head in classrooms of children as young as prekindergarten age. Black children get suspended and receive detention at disproportionate rates, causing them to fall behind in school and encouraging student dropout, which in turn can set them on a path to juvenile detention and lifelong incarceration.

In the classroom setting, this can look like a Black student being blamed or punished for something a White student actually did. It can also look like a Black student receiving a harsher punishment for an action than the White students who acted in the same way. I’ve instructed my children to look out for these seemingly small, interpersonal instances of injustice so that they can speak up to defend their Black friends if they are wrongly accused or unfairly disciplined. You can read more about this issue here.

Furthermore, I have made it clear that I am willing to go to bat for my Black friends and their children when they experience discrimination in the same school and district my children attend. My children know this, and my friends do, too, so I am a safe person they can trust to talk to about these issues when they are facing discrimination and need an ally that supports them when they are being ignored or talked over. This looks like writing letters to school administrators or corroborating stories of discrimination when appropriate.

At all times, it means taking the lead of the person experiencing the discrimination and supporting them as they have asked me to, without forcing any of my own ideas or intentions on them. Being a racial justice ally requires me to be brave and uncomfortable in many situations where my Black friends and chosen family may not even be present. It requires me to say something when the White and non-Black people around me are saying or acting in ways that are hurtful, discriminatory, and oppressive. By modeling this to my children, I am teaching them in the most effective way how to speak up on issues of justice. You can read more about this issue here and here.

Raising my children in an LGBTQ(+)-affirming environment means that I have to educate my children on gender and sexuality variation in other people. It also means I encourage them to make choices in clothing and expression that feel right to them, even if it has nothing to do with gender or sexuality.

I decided a long time ago that I wasn’t going to be the parent who brought my children to PRIDE only to have them point, stare, and ask, “Mommy, What’s that?!” when seeing a trans woman or a gay man in drag or a gender nonconforming person. So we talk about not assuming someone’s pronouns and making a point to ask questions. I also model this behavior for them by making a point to ask someone friendly and new we’ve met what their name and pronouns are (when it’s natural to do so in a conversation). You can read more about this issue here and here. 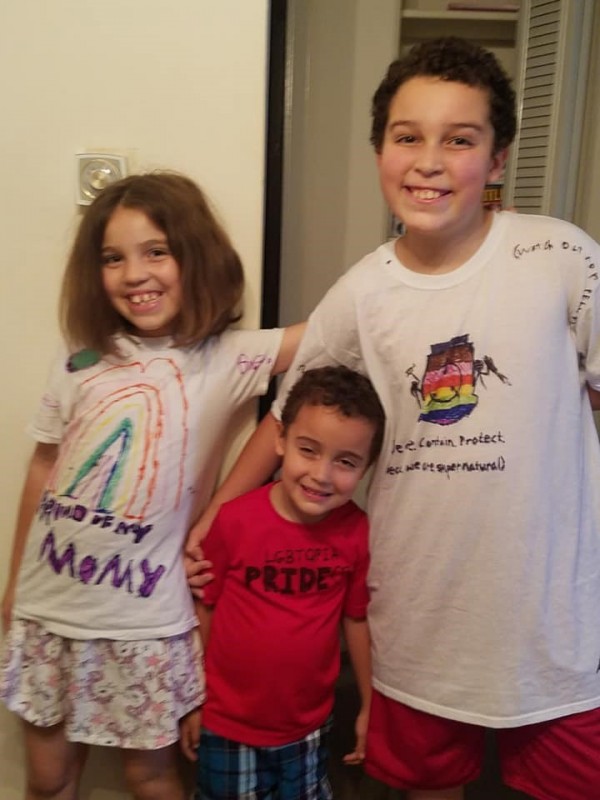 Finally, when possible, I curate my children’s media consumption, from what they watch on streaming services to what they read off their bookshelf. We have family movie nights with LGBTQ and Afro-centric lead characters (some of our favorite Netflix series include She-Ra and the Princesses of Power reboot, and Kipo and the Age of Wonderbeasts).

I read books about successful Black women in history to them at bedtime (They love Good Night Stories for Rebel Girls by Elena Favilli and Francesca Cavallo, and Little Leaders: Bold Women in Black History by Vashti Harrison). I do not subscribe to print magazines with Eurocentric, thin, and able-bodied models. I fill my own bookshelf with books by authors of a variety of ethnicities and sexual identities, and with novels with non-White lead characters.

By curating my children’s media consumption, they become used to a world that centers people of all races, ethnicities, cultures, genders, sexualities, abilities, ages, and body types equally. Growing up with that mindset of variety and equality means my children will be equipped to recognize inequality in the real world and challenge the status quo. You can read more about this issue here and here.

Over time, I stopped being the one leading the conversations and instead I became the listener. My children have come to me with reports of discrimination and inequality that their friends and classmates were experiencing, and we troubleshooted how to respond together.

As we keep the lines of communication open, we forge a bond that will last long into the teenage years and adulthood, because I am most concerned with being a safe, accepting person that my children can count on as they grow and figure out who they are.

I don’t always get it right, but I am learning and listening. My hope – like all parents – is to do my best today, so I can see my children thriving tomorrow. 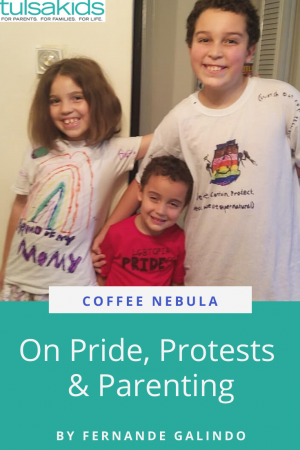