A hearty dose of the Wild West

September is a time when many families are consumed by “all things school” during the week and “all things sports” on the weekends. In light of this, if you are in a quandary trying to plan activities that will ignite enough excitement to shift the family focus for a time, why not head out of town for a short but sweet western-themed adventure?

Native American and cowboy heritages are at the center of it all in an educational and entertaining way at two family-friendly spots in Oklahoma City—The National Cowboy & Western Heritage Museum and Frontier City, Oklahoma’s premiere amusement park. Together, they make for a comprehensive dose of this important and exciting aspect of our state and national history.

Giddy Up At the National Cowboy & Western Heritage Museum

Slap on your spurs and explore the halls and grounds of this one-of-a-kind museum, with its thorough collection of world-class paintings, notable sculptures, and rotating exhibits. From Native American artifacts to historic cowboy gear, the extensive collection helps visitors better understand the important influences of the American West and its diverse cultures. Breathtaking works by internationally renowned Frederick Remington, whose expansive work captures the essence of the American Old West, are prevalent.

Perhaps the crown jewel is the iconic “End of the Trail” statue, a massive plaster masterpiece, standing 18 feet tall in front of a wall of glass. Sculptor James Earle Fraser completed this beauty in the 1920s and, after residing in California for several decades, it was ultimately moved to Oklahoma in 1968, where the Trail of Tears literally ends. For a half-century now, it has called OKC its home and serves as a poignant reminder of the horrific hardships and tragic times endured by the Native Americans while being forced into the western front back in the 1800s. The Art Institute of Chicago, which houses a later model and cast of this sculpture, states that it is a “melancholic commentary on the vanishing Indian,” and “the work portrays an exhausted Sioux drooping over his equally weary pony; both rider and horse have literally—and figuratively—reached the end of the trail.”

For the younger kids, be sure to check out The Children’s Cowboy Corral. Designed for little ones with a perpetual thirst for knowledge, this section is highly interactive. There’s country music sung by a cowboy, dress-up clothes, saddled play horses to “ride” plus reading materials to enjoy while learning about the western lifestyle. Children will gravitate toward the make-believe campfire and pretend to prepare food in the great outdoors.

Get the Lowdown on Frontier City

Step back in time and play out the frontier theme at this small amusement park with a big heart for the Wild West. The buildings and their facades as well as the names of the rides and attractions are in keeping with the theme.

Opened in 1958, this 55-acre park houses many of the buildings and props from the Oklahoma State Fair Boomtown exhibit back in 1957. There are 28 rides in all, including five wild ride coasters like the Gunslinger and the Steel Lasso, and several water rides, including the exciting Mystery River Log Flume.  Several western-themed shows and acts are performed each day. There is an old town gun-fight show, including a heated stunt-laced duel, so don’t be surprised when blank rounds are fired. If that’s not enough excitement, take the train ride through the woods. For the ultimate personalized, lasting souvenir, stop by the dress shop and suit the whole family up for an old-time photo. Choose from an assortment of period-themed garb such as cowboy hats, bonnets, frilly frocks, chaps, boots and more.

Like the Oklahoma Cowboy & Western Heritage Museum, Frontier City caters to little ones, too. The Wild Kitty coaster is a mini thrill ride, plus there is a children’s section that features safe, age-appropriate attractions.

Brand spanking new for 2018 is Frontier City’s first full-fledged Christmas celebration. The park will be punctuated with more than a million lights while many of the favorite rides will be in operation while Santa receives visitors with their holiday wish lists.

Once you decide to carve out time to step back in time, wrangle the family for a one- or two-day jaunt. Both venues can be seen in one day because they are less than 10 minutes apart. But to fully immerse yourselves, consider an overnighter to maximize the benefits at each attraction. Hampton Inn OKC Northeast and Holiday Inn OKC North are super convenient. Bricktown is a mere 15 minutes away if you’d like to enjoy the downtown urban experience instead. Pay attention to hours of operation as they are subject to change after Labor Day.

For more specific details on hours of operation, pricing and show times, check out www.nationalcowboymuseum.org and www.frontiercity.com. 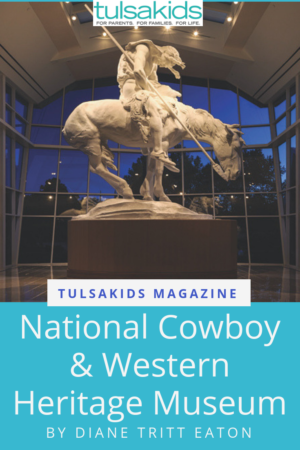