Being a rocker, I did not have much desire to see Justin Bieber in concert. Although now as a parent (as you well know since you are likely a parent, too), I am obligated to attend events I wouldn’t have before. Anything at Chuck E. Cheese comes to mind. But a sold-out concert at BOK Center, now that is more up my alley. I’ve been going to concerts since I was 12 and now I am 56 so, yeah… I’ve seen a few. And yes, I’m a rocker, but I like lots of different genres of music. So, in my blog today I’ll talk about taking my 12-year-old son to Justin Bieber and Oklahoma Blood Institute as my weekly non-profit. Yes, please donate blood!

The Things We Do as Parents

I hadn’t planned on taking my son to see Justin Bieber at BOK Center last week. Mainly because I can’t afford three tickets to a sold-out concert at BOK Center. But, the Belieber Gods were smiling on me that day. Don’t get me wrong, it was on my radar since my son and his friends are big fans, but it was just one of those things that I didn’t think was going to happen.

Every Friday I go into Cox Media to do some work with my radio station, 103.3 The Eagle. My son went with me last Friday. While we were there, one of the opening acts, Eddie Benjamin (here is his Instagram page: instagram.com/eddiebenjamin/), came walking into the radio station! Wow! This is one reason why I love radio, the spontaneity of excitement is ever present. Honestly, I didn’t know anything about him, but my son did. We waited outside the Mix 96.5 control room as he did an interview with afternoon radio DJ Abby Jensen. Once they were done and walking down the hall I had to ambush him so my son could meet him. He was super cool and even complimented my son on his hoodie. And let me tell you, my son is a hoodie fanatic, so that was a HUGE deal! Eddie gave him an autograph and paused for this pic: 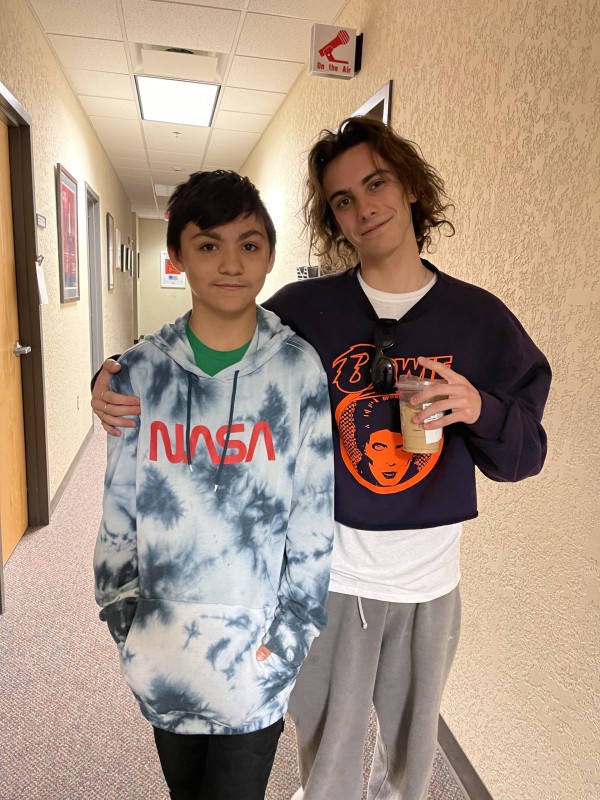 As they were walking out, Eddie turned to Atticus and said (which I was hoping he wouldn’t), “See you tonight, right, my man?”

Atticus just kind of smiled and gave a confused wave back. We ducked into my boss’s office to process what just happened. The stunned look on my son’s face was priceless. Then came the question I had been trying to avoid, “Dad, are we going to the concert tonight?” I told him I couldn’t afford it and had to watch that awesome look on his face turn to disappointment and sadness. All in the presence of my NEW boss, mind you.

I reminded him we had plans to go to Andy B’s that night, but that wasn’t much consolation. With that, I snuck into the other room to finish my work. A few minutes later I get a text from my boss (who was just down the hall) saying she is working her “radio magic” to get my son a pair of tickets if that was OK with me. “Hell yes!” I replied. And sure enough, 3 hours later we were sitting in BOK Center watching Eddie Benjamin jam on his guitar swooning to the sold out crowd, packed with screaming girls (and moms!) and boys. It was awesome. Shout-out to Kim, Abby and Libby, thanks for being so kind to my son!!!

Here are a couple pics and video from the show: 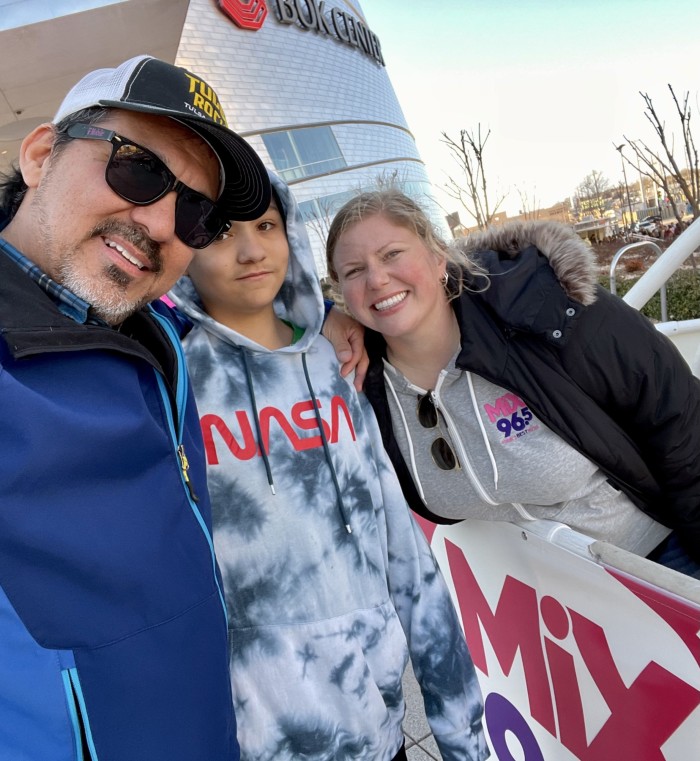 Me, Atti and Abby Jensen outside BOK Center 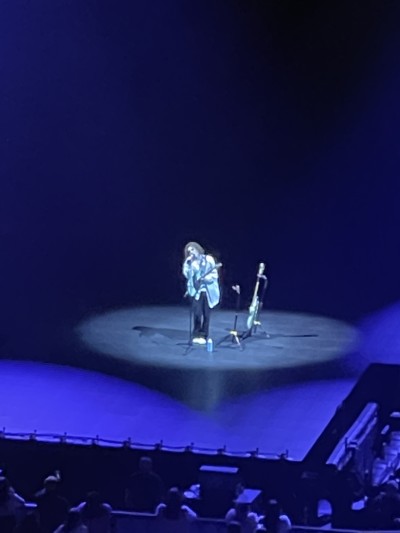 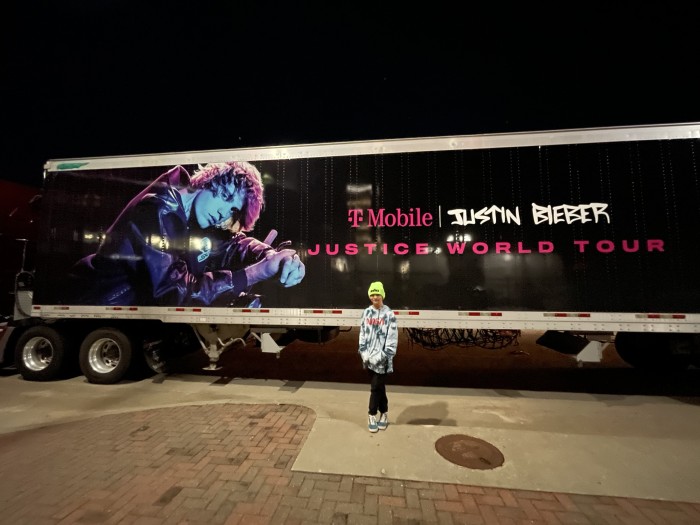 Justin Bieber was awesome. But the crowd was even awesomer! And the stage production and light show was right up there with Metallica. Not quite the lever of KISS, but then, no one is. I only knew one song, Baby. And parts of a couple other songs since my son plays them on our Alexa device at home. And of course the ones I hear on Mix 96.5 when my kids are in the car. And I have heard how great his concert production was, so I was taking it all in. Our seats were about 10 rows from the very top, which was fine with me and my son. From there the pattern of lasers looked spectacular! And when the crowd held up their phones with their flashlights on, it was too cool! And that happened often, as every artist that took the stage encouraged it. At one point I had to lean over to tell him, “back in the day we used to hold up our cigarette lighters in concerts.” He looked at me like, “Huh? That’s dumb.” Lol!! And he’s right, but it was awesome, too! Until you burned your finger real bad. 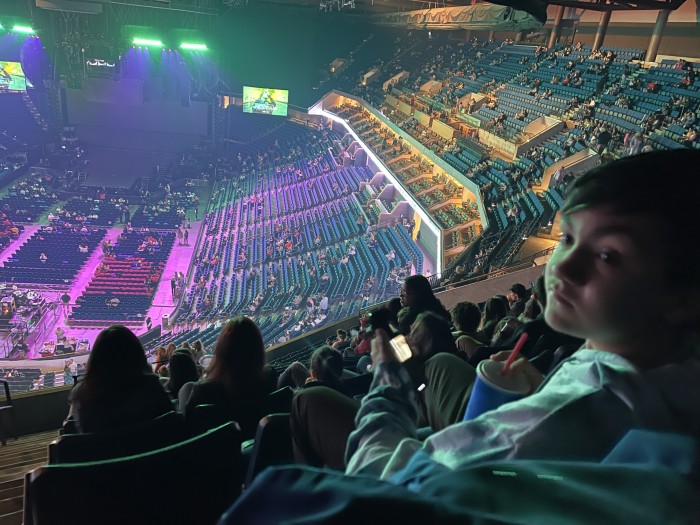 Our seats at Justin Bieber

I was a bit surprised at some of the language in the lyrics since the arena was full of kids, but it was only in a couple songs and then I thought back to concerts I’ve seen as a kid, Ozzy, Ted Nugent, etc., and thought, yeah this is pretty tame. Plus, none of the thousands of kids or parents I saw cared, either; they just lived in the moment and were loving it.

I loved seeing Justin show off his talents and play a beautiful grand piano for a couple songs, but he is also a badass drummer, so I was hoping to see him slam on the skins but alas, maybe next time.

Next concert for me is the Marshall Tucker Band at Hard Rock Live this Saturday. Sold-out show! 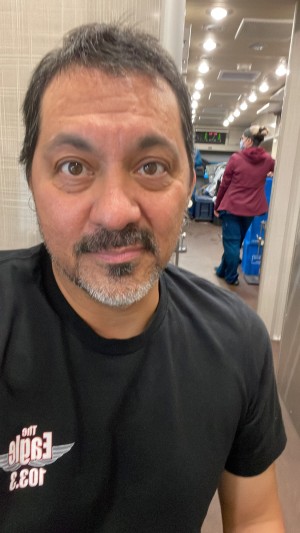 Thanks to all who braved the terrible weather we had during our blood drive and came to make a donation. This past Monday at our Cox Media radio station studios, we hosted a blood drive with Oklahoma Blood Institute. It was cold and rainy the whole day, but there were some who laughed in the face of adversity and came to donate anyway. And a big thanks to iHop, who gave a certificate for a stack of pancakes to anyone who donated. You can still donate and get a cool baseball jersey type of shirt that says “I’m a little bit country” or “I’m a little bit rock and rolll”! There are many blood drives coming up at locations such as: University of Oklahoma, Tulsa, Will Rogers High School and more. Here is the link to find one that fits in your busy life: 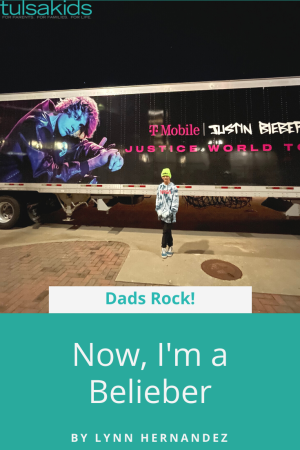