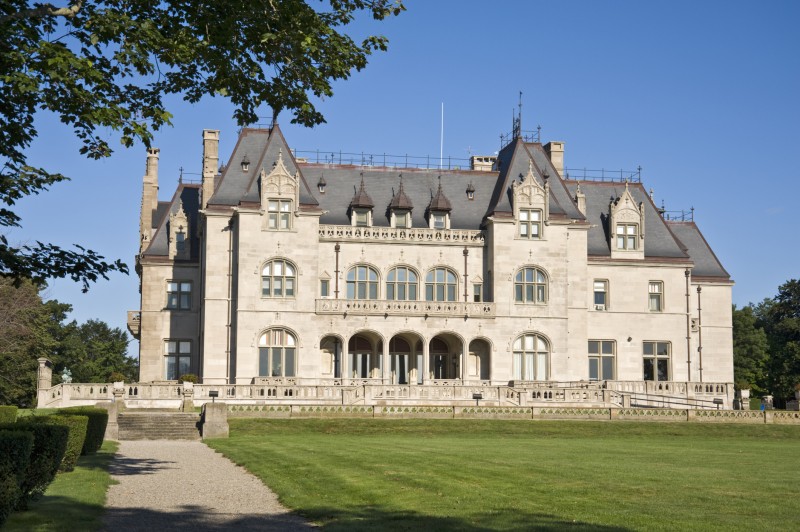 Rhode Island, the smallest U.S. state, offers some big-time attractions in the coastal city of Newport.

To learn what makes Newport stand out, my family paid her a visit. And, with only three days to spare, we concentrated on the ultimate “wow factor” there —the palatial estates and the harbor side attractions.

A Whole Lot of History

Founded in 1639 on Aquidneck Island, Newport was a thriving colonial period seaport. Then, during the Gilded Age of the late 19th century, fashionable society discovered its bayside beauty, quickly making it “America’s First Resort” and the premier spot for wealthy aristocrats to build mansions.

Exploring the elaborate estates along Bellevue Avenue made a lasting impression on my family and, in particular, my younger son who frequently refers to them as a point of comparison to homes in Tulsa and when traveling to other cities.

As you view the homes, with their high privet hedges, impressive drives and stately entrances, take advantage of sharing the history with your children about the Industrial Revolution, the robber barons, the steel tycoons and the rise of industrial wealth in the United States.

To get a stronger sense for “how the other half lived” during the glamorous Gilded Age, we took an inside tour of The Breakers, the grand dame of the 11 mansions open to the public, thanks to the ongoing efforts of The Preservation Society of Newport County.

This Italian Renaissance-style summer “cottage” (a moniker used by the super rich) was built for the Vanderbilt family, which amassed its fortune during the development of the railroads. There are 70 rooms in total and the estate sits on 13 acres with a perfectly manicured lawn overlooking the bay. Nothing was spared during construction, so the building is a sumptuously sculptured and decorated masterpiece. It is difficult to fathom that The Breakers was ever a single-family home. This and all area mansions resemble European palaces and feel oddly out of place in the United States.

The Breakers, as well as The Elms and the Marble House, feature self-guided audio tours, which I highly recommend when escorting children through them. That way, you can set your own pace.

Most mansions are within walking distance of one another and there is public parking. An easy alternative is to park downtown and ride the gas-powered trolleys, which depart frequently from the very helpful Newport Visitors Center near the wharves. Be sure to visit the center to obtain detailed information about tours and packages, which will save you time and money.

The highlight of our visit was the Newport Cliff Walk, a spectacular 3.5-mile public access path nestled along the sea side of these majestic properties. This experience earned the most accolades from my kids for they were free to roam and tackle rocky paths down toward the breaking waves while admiring the homes from a different perspective.

Be sure to wear comfortable walking shoes because sections of the path are paved while others require some more calculated strides.

There are two entrances to the trail; the shorter trek might be a better choice when taking small children along. There are exits every ¼ to ½ mile, if needed.

Newport Harbor – A Boatload of Fun

Indeed, the mansions are the main Newport attraction, but the harbor area offers its own fair share of fun. The bustling downtown district, including Thames Street, is full of cobblestone streets with a section of restored colonial homes. You’ll find shops and eateries and, along the wharves, marinas are packed with super yachts, sailboats and more boutiques and restaurants.

To see a different view of Newport, we took an affordable afternoon Gansett Cruise tour of the harbor. Departing from the Inn of Long Wharf, the traditional 50-foot passenger boat with its open deck plan made for a comfortable ride, at only $20 a person. We admired mega-yachts from all over the world and tried to spot area dolphins. Our captain pointed out the 300-acre Hammersmith Farm estate, where Jacqueline Kennedy Onassis summered and where she and President Kennedy held their wedding reception. We also saw Fort Adams State Park, the summertime venue for both the nationally acclaimed jazz and folk festivals and the home of famous centuries-old Fort Adams and the Museum of Yachting.

Memorial Day through Labor Day is high season — a time when you can expect great weather but large crowds and high rates. Off-season, rates drop and many attractions remain open. During the holiday season, the mansions are elaborately dressed, adding a festive spin to their décor.

Newport is situated approximately180 miles north of Manhattan and 70 miles south of Boston. So, if either city is on your “bucket list” why not parlay a side trip to Newport? Of course, my recommendation is to give Newport its own place on your family travel list due to its stand-alone greatness.

Having visited Newport during high season, hotel costs were at their peak. So staying at the Residence Inn in neighboring Middletown, 5 minutes from downtown Newport, was a smart choice for my family. We stayed in a suite, which felt like a contemporary apartment, with a flat screen TV and a modern kitchen. The kids enjoyed the complimentary breakfasts and swam in the indoor pool until closing time. The staff was well-versed and made fine dining suggestions for us including Flo’s Clam Shack, a casual waterfront establishment and the Brick Alley Pub on Thames Street in Newport. We were spared nothing and treated like royalty during our stay.

If you opt to stay in Newport proper, you might consider the newly renovated Newport Marriott, due to its spectacular harbor side location and proximity to the heart of the wharf, shopping and dining districts. The multi-story open-air lobby has a fitting nautical theme. It is kid-friendly with in-room refrigerators and an indoor pool. Babysitting and laundry services are also available. Rates vary based on the season.

The Castle Hill Inn and Resort

The Castle Hill Inn & Resort is another option, having earned a spot on Travel + Leisure’s Top 500 Hotels in the World 2009 and Condé Nast Traveler’s Gold List 2009. This is an oceanfront resort that sits on the edge of the peninsula along Ocean Drive. It is elegant and likely a better choice for older children or for a romantic getaway. They offer al fresco dining in the summertime at the Outdoor Sunset Grille.