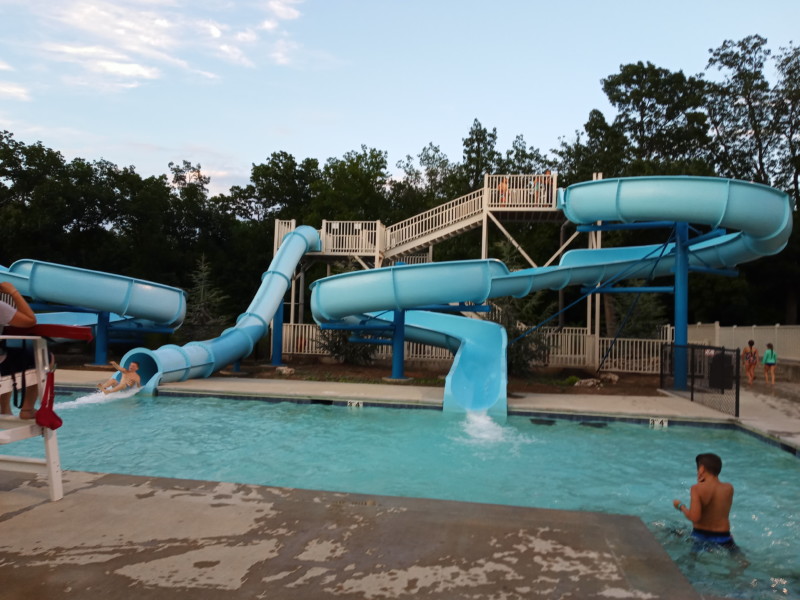 As a Southern Baptist kid living in Oklahoma, going to summer camp was an annual tradition, and at some point, I went to most of the big regional ones. Kanakuk, Shepherd’s Fold Ranch, Fall’s Creek, Tulakogee—every summer from about age ten, I took the opportunity to go to every retreat or sleepaway camp that was available.

In the digital age, I think summer camp is more important than ever for today’s tweens. It’s a chance for them to unplug and get some face-to-face interaction with other kids their age without the pressure of school looming. It’s an opportunity to get outdoors and connect with nature in a way many city kids don’t get to experience on a regular basis. A chance to practice quieting their minds and at the same time to get rowdy and loud and completely wild.

In many ways, summer camp is a rite of passage.

That’s why when I was given the opportunity to check out what’s become of the old Camp Dry Gulch and learn about Discovery Days, New Life Ranch’s summer camp for younger age groups, I jumped on it.

New Life Ranch is a non-denominational ministry aimed at building leadership and supporting their community through retreats and camp. You can read about their articles of faith here.

We had the opportunity to drive out and spend the day and night among campers in the middle of the last Discovery Days session of the summer, and it was awesome. Here’s what we learned.

If you’re not familiar with Dry Gulch, USA, it’s the somewhat Disneyfied version of a Wild West town created by Willie George Ministries (of Church on the Move) that has been around since the mid-eighties and functioned as a retreat hub for Christian groups in the region. It was also the home to the annual Christmas Train put on by Church on the Move.

Last year, ownership of the 230-acre camp passed to New Life Ranch with the aim of expanding their ministry. Whereas formerly, different church groups and organizations would visit the facility for their camp, New Life Ranch sought to provide high-quality, consistent programming for their junior campers from second through sixth grade who sign up directly.

I had no idea what to expect when we showed up, but we were excited to be there. We met New Life Ranch Development and Communications Director Tim Hale when we arrived. We’d timed it perfectly—campers were just starting to file into the mess hall for lunch. We filed in line expecting some kind of low-grade camp fare, so imagine our surprise when the smiling young foodservice team passed us a healthy serving of chicken quesadillas with a side of real, chunky guacamole.

“Drink plenty of water!” I heard the counselors reminding their young companions as they stood in line at the fountain drink station, which offered Vitamin Water, Gatorade, and tea.

Over lunch, Tim talked to us about the camp’s ministry. The camp, newly dubbed Frontier Cove after a charming little cove onsite, was an opportunity for New Life Ranch to expand its ministry and focus on providing programming directed at the younger age group.

Besides offering a wide range of programming aimed at improving their community—like after-school programs for area kids in a county where many are socioeconomically disadvantaged and camps for foster kids and those whose parents are in prison—New Life Ranch focuses heavily on servant leadership.

If you’re unfamiliar with this concept, servant leadership is, put simply, the idea of leading by serving others. Young people in the senior grades are able to participate in a servant leadership program that works in coordination with the junior camp.

This also means by the time they’re in college, they’ve got real work experience behind them—work experience that starts by putting others before themselves. Compassion, empathy, and community responsibility are core values interwoven into the program.

On the junior camp side of things, tweens in the program are focused on relationship-building and engaging in new experiences. And Frontier Cove is perfectly set up for the task at hand.

As we began to polish off our lunches, the room—well-air-conditioned and beautifully appointed retro cowboy-themed digs unlike the rough, utilitarian mess halls of my childhood—began to swell with energy. Kids were swarming about and standing on tables, and strangely dressed youth were milling about purposefully. Was that a cardboard dragon on someone’s head? 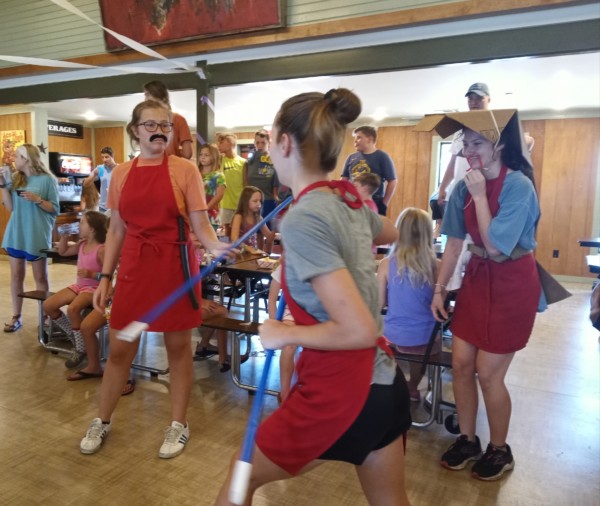 As we shuffled out of the room, they were all loudly singing and re-enacting the military montage from Mulan. And everyone was laughing and smiling.

As we passed through the center of camp, I was reminded of Dodge City, which I had visited as a kid. Strewn along the banisters were dozens of drying towels and swimsuits in vivid neons and vibrant prints.

Rather than haberdasheries and barbers, the old-timey building facades housed rows of bunk beds. We peeked into a currently-vacated bunkhouse to get an idea of the kids’ accommodations, and I had the clearest image of myself circa 1989 smoothing my red fleece unicorn blanket on a bunk I shared with my friend Brandi at Tulakogee. Except, in this case, the large, wheezing fan struggling to keep up with Oklahoma’s oppressive heat was replaced with the comfortable silence of central air.

We also stopped by the camp’s medical facility. Frontier Cove keeps two nurses on-staff at all times, and they sleep in the well-equipped nurse’s station. The station itself offers curtained spaces for kids to rest and recover that look more like an emergency room than a summer camp, a comforting thought to a parent sending their kids away to camp for the first time.

Back in town square, a group of boisterous youth was loudly playing as they walked. “They’re so loud!” Lucy remarked.

“That’s part of the point of camp,” we told her. “You get to just go completely nuts with other kids your age.” 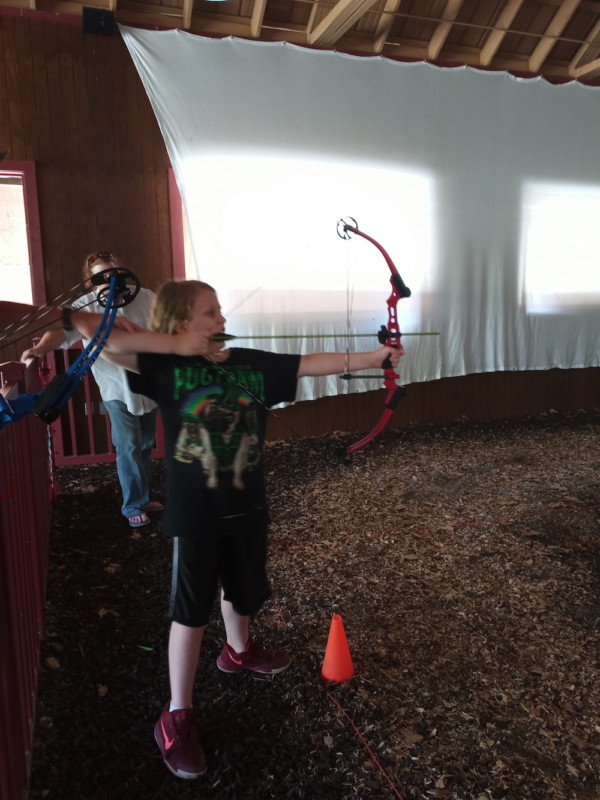 After lunch, we stopped by the archery range, where my kids got to shoot a bow and arrow for the first time. Next, the kids got to check out the ropes course. Lucy got a little freaked out at one point, but she pushed through and was proud of herself when it was over. 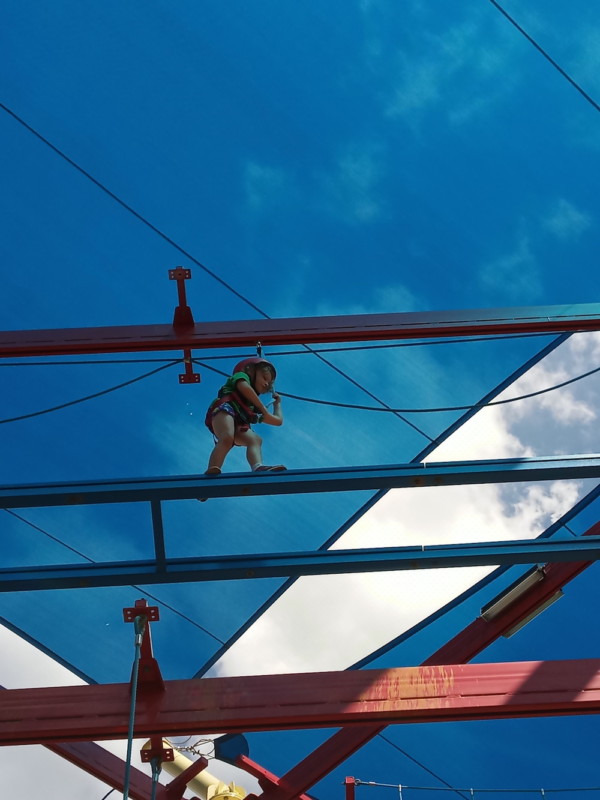 We stopped by the stables, where about 16 horses reside, before popping over to the go-cart track.

At the pool area, large inflatable slides and obstacle courses were set up for the kids to play on. Adjacent were two pools, no more than four feet deep at the lowest point. At the end of one was a basketball hoop. The other housed four smallish waterslides that we, of course, had to check out. Repeatedly. 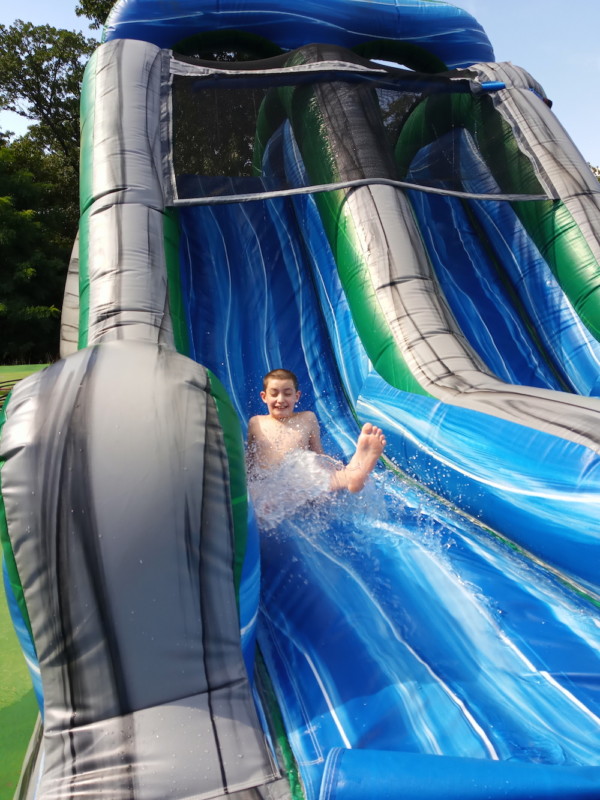 We also took a trek into the woods to visit the breathtaking outdoor chapel overlooking the lake. I thought of Emily Dickinson: “With a Bobolink for a Chorister— / And an Orchard, for a Dome—”

Afterward, we played some air hockey, pool, and foosball and shot some hoops in the camp’s little rec centers. We also stopped by the large and stunning indoor auditorium where chapel and worship takes place and visited some of the smaller meeting rooms. Everything was beautifully put together.

At dinner, the kids shuffling into the dining hall were decked out in overalls, cowboy boots, and bandanas. It was western night, Tim told us over chicken fried chicken. Every day, there’s a theme.

Before turning in, we grabbed some ice cream at the canteen, where youth were milling about with Bibles or towels tucked under their arms and Icees in hand. The camp uses an account system that parents can add funds to online. Families can also send their kiddos a message online, which kids are able to access every day.

We spent the night in the camp’s roomy onsite hotel-like accommodations. In the morning, I woke up in time to catch the sun rising over Hudson Lake. As I walked around the outdoor dining area overlooking the lake, I passed a couple of young counselors having a morning devotional and taking in the serenity of the view.

There’s so much to do at Frontier Cove that I can’t begin to cover it all in a single post. I didn’t get to cover scholarships, family camps, hatchet throwing, food allergies, and canoeing.

But the biggest takeaway is in a world where too many faith groups are caught up in their own prosperity and branding, New Life Ranch is more focused than ever on what faith groups should be focused on: serving others and sharing their love and compassion with their community. Frontier Cove is a loving place where youth can create memorable experiences to last a lifetime, build relationships, serve others, and learn to quiet their minds.

That, to me, is a beautiful expression of faith.

A huge thanks to New Life Ranch for having us out. Learn more about this amazing camp in time for next year online.

Thanks for reading, friends, and have a beautiful week! 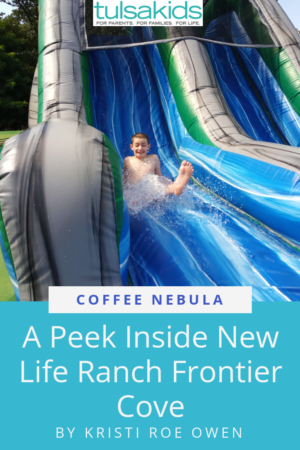