New Games to Play from FoxMind:

It’s been awhile since I’ve tried a new board game. But it’s a perfect “family time” activity, especially during the cold months. So when a representative offered to send me samples of some games by FoxMind, I said, “Yes, please!” All the games on the list she sent sounded like a lot of fun, so I just let them choose. We ended up with ConeZilla, Bermuda Pirates and Maze Racers.

All three of these games can be played with as little as two people. Since it’s usually Joss and I hanging out at home together, that was perfect. A couple of them (Bermuda Pirates and Maze Racers) were targeted toward slightly older kids. However, I’m not too competitive so don’t mind letting Joss “cheat” a little.” Or, just make up his own rules altogether. 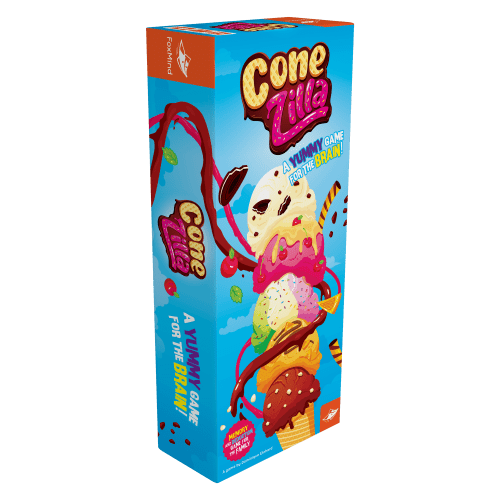 I love all things ice cream, so was excited to try ConeZilla. It’s geared towards ages 6+ but was perfect for Joss. Even better, he’s been learning “greater than” and “less than” in his Kindergarten math class, so this game tied into those lessons really well. 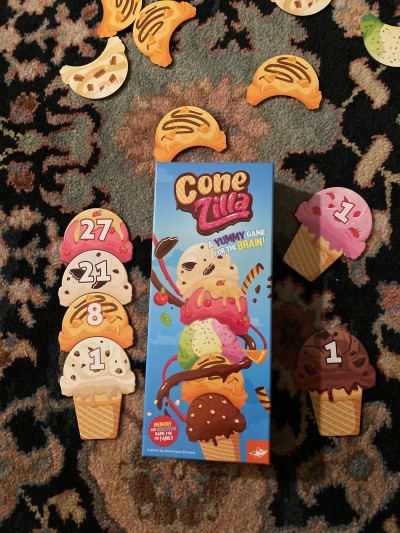 This is a 2-4 player game. We played it both with two (Joss and I) and three (our whole family). It was fun both ways, but nice to have the third player! Basically, each player starts with an ice cream cone with a “1” on it. Then, there are 48 ice cream scoops labeled with the numbers 2-49. You put these in a pile face down and take turns choosing them. Each time you choose a scoop, you can either add it to your cone or return it to the pile. 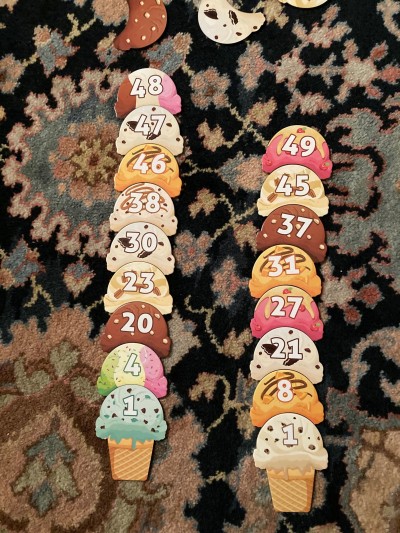 The goal of the game is to build an ice cream cone with ten scoops, including your initial scoop. However, you have to build it so that the numbers on each scoop get progressively larger as you build up. For example, your first scoop is labeled “1.” If your drew a scoop labeled “49,” you’d want to put that back in the pile and wait for your next turn, since there’d be no way to draw a number larger than 49.

It’s pretty basic, but again, perfect for young kids. And the ice cream designs are a lot of fun! Mostly, I just wanted to eat some ice cream afterwards!

Be the first player to collect 10 mouth-watering ice cream scoops and be the winner of the spectacular ConeZILLA game. This fun game of tactics and memory will have children and adults rallying for second and third calorie-free servings. A perfect yummy game for the brain! MSRP: $14.95 | Age: 6+ 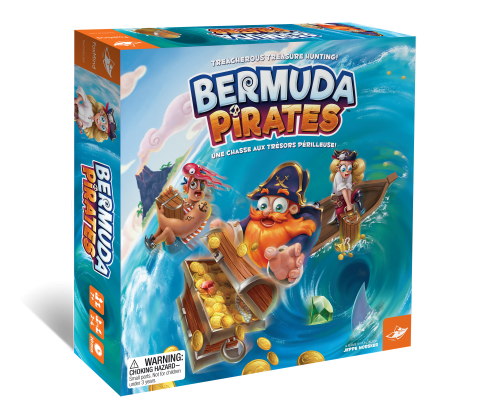 This game, for ages 7+, was more complex than ConeZilla but still easy. Again, this game can be played by 2-4 players. It’s unlike any game I’ve played before! Essentially, you have a game board, but underneath that board are four smaller boards. Those smaller boards have magnetic spots that can’t be seen once the top board is in place. 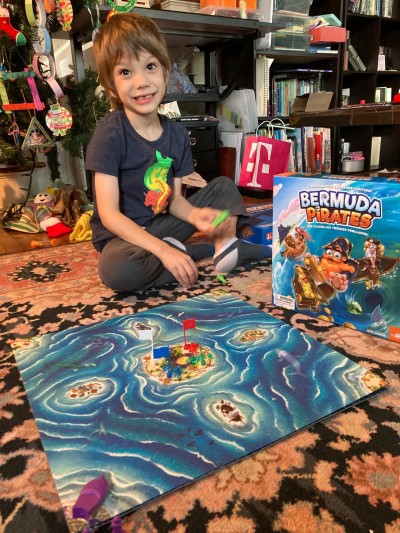 Each player has a small boat, which they push around the board, trying to avoid the invisible magnetic “whirpools” or other obstacles. The object of the game is to bring four plastic gems back to your starting corner. And yes, it’s pretty hard to avoid the whirpools at times even when you have a general idea of where they are! 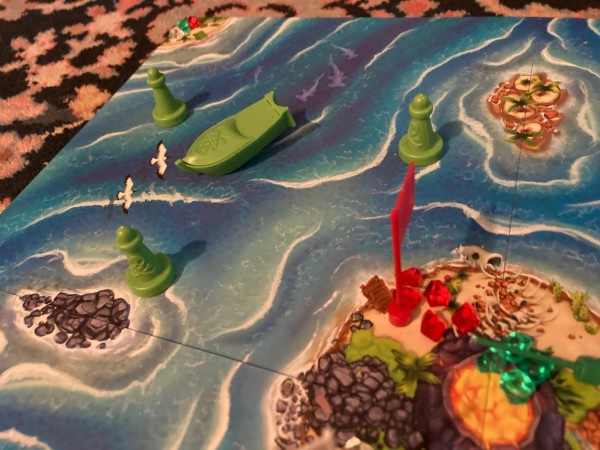 Joss enjoyed this game although got frustrated a couple times. I just gave him an extra turn. I like that the game is so different. There’s no dice or spaces involved, you just push a little boat around! In addition to trying to get all four gems first, you can also compete with the other players by picking up any gems that they may have “lost at sea.” That is, if they get caught in a whirlpool and the gem falls off, they leave it floating in the “water” and someone else can steal it on their turn.

Bermuda pirates is an action packed magnetic game with a unique and innovative playing board. The game offers more than 6000 configurations that develop dexterity and memory. This game can be played by the whole family and has advanced gameplay for experienced players. Enjoy the thrilling Bermuda Pirates now! MSRP: $29.95 | Age: 7+ 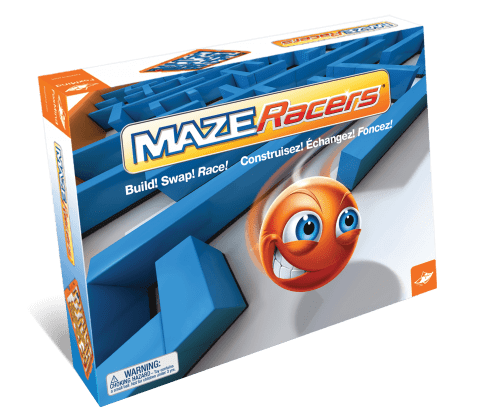 Oh boy! This game was a bit much for me. I’ll bet Daniel would be great at it though. I’ll just say that Joss was assigned to build a Rube Goldberg machine for science class recently, and I was not thrilled.

This game is perfect for two players, as there are just two maze boards included. However, you could easily turn this into a maze-building tournament if you have more than two players. 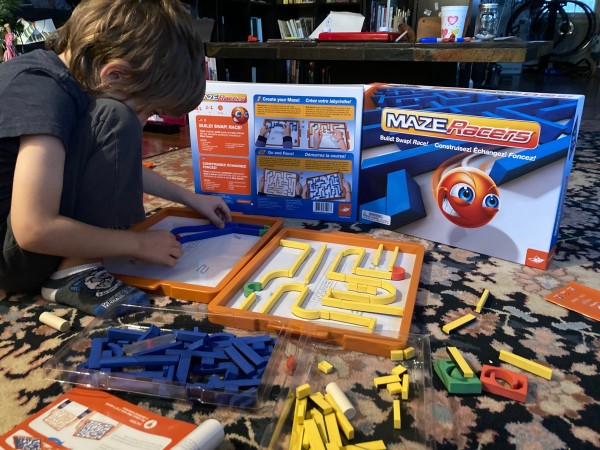 Each player has a magnetic board and magnetic maze wall pieces in different sizes. They both start building a maze. The first person to finish building their maze shouts, “Ready to race!” at which point the other player has one more minute to complete their maze.

Once both players have completed their mazes, they swap boards and race a wooden ball from the starting point to the ending point. Whoever finishes the fastest, wins! 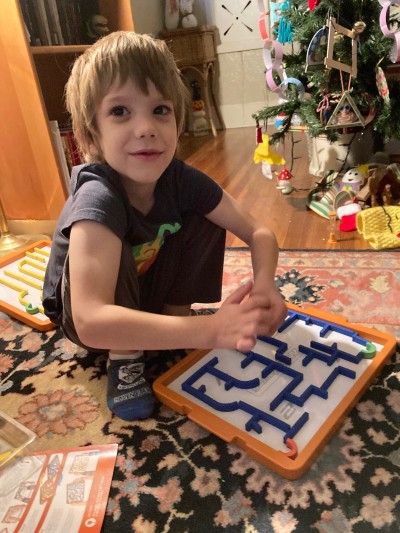 It was no surprise to me that I wasn’t great at building mazes. But that just means this game is perfect for young engineers or anyone interested in building, architecture…you name it! I can definitely see slightly older kids getting really into this. Joss didn’t want to race – he’s not always a fan of competition. But he did enjoy building with the maze pieces and trying my finished maze. Maze Racer is also targeted for ages 7+, so no surprise that it was a bit over his head. But it definitely seemed to be over mine as well, ha.

Players use magnetic walls and a good dose of creativity to build the most wicked maze that will leave their opponent scrambling to find their way out. Maze Racers is also a race against time as from the moment a player has finished their maze, the opponent is left with one minute to finish theirs. When the time is up, both sides swap their maze boards and a furious race starts! By tilting their board, each player steers a ball through the maze as quick as they can in an effort to complete it first. Be the fastest in 2 of 3 rounds to claim victory! MSRP: $34.95 | Age: 7+

One reason I wanted to write a post about FoxMind games is that Joss and I actually played one several months ago at Shuffles Board Game Cafe! The employees there are great at recommending games they think you’ll enjoy, based on age and interest. TacTac Jack was the second game Joss and I played, and it was simple but fun. It’s a bit like Jenga only instead of removing pieces with your fingers, you have a tiny plastic axe that is used to tap on tree ring-shaped pieces. It was really cute.

What’s the best new game you’ve tried lately? Or an old favorite? Let me know in the comments! 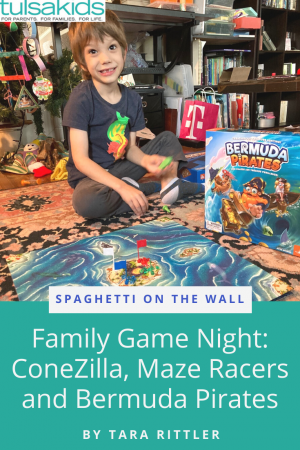