As a child, my vacations were spent trekking up and down the eastern seaboard. The shoreline and the Atlantic Ocean were like an extension of home —- a veritable playground where I experienced some of life’s happiest moments. Not surprising, I became obsessed with water. And, in my teens, with many beach jaunts under my belt, Dad treated the family to a special excursion to Nassau/Paradise Island in The Bahamas, where he and mom honeymooned 30 years earlier.

As a result, I truly became an aquatic lover. 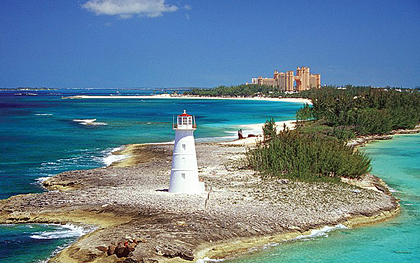 Lighthouse on a beach in Nassau/Paradise Island

Not counting a 30-minute seaplane ride in Northern Maine, this trip was my maiden airplane voyage. And I will never forget my amazement when we began our descent into the Bahamian capital city, Nassau. The phenomenal beauty of the sea below, where my virgin Caribbean swim would occur, took my breath away.

To describe the water surrounding the islands, one has to go beyond the spectrum of green and blue hues. Large patches of the Bahamian waters take on a deep purple color while, in contrast, others are nearly colorless, with a clarity that allows visibility of 100+ feet down to the ocean floor. The color range is a result of the water’s depth and that which lies below and above the surface, such as the coral reefs or the billowy clouds.

For water enthusiasts like me, the allure is so great that once you dive into it, you won’t want to come out. Water temperatures are warm year-round so, no matter the season, you can make a splash.
Snorkeling and scuba diving are a must here. You can explore some of the best marine life habitats in the world. Nearly 5 percent of the world’s coral reefs are located here —-more than those found within the Great Barrier Reef in Australia.

There’s also water skiing, boating, fishing and parasailing. I eagerly signed up to parasail, floating high above the water, marveling at the view.

A Collection of Sandy Spots

The white sandy stretches offer a peaceful resting place for drying off. With 17 beaches in all, almost any day of the year is a good beach day. Average temperatures range from 70 degrees in the winter to 82 degrees in the summer and the sun shines more than 300 days a year.

During my first visit, the family explored Cable Beach, a four-mile stretch of white sand in Nassau. We stayed at one of several lovely smaller hotels that have since been replaced by well-known, all-inclusive resorts such as Sandals, Breezes, Sheraton Nassau Beach and Wyndham Nassau.

Years later, for my parents’ 50th wedding anniversary, we stayed along Paradise Island’s northern coast, which offers a three-mile span of sandy shores, and is home to many resorts.

Since my first trip, I have returned to this heavenly place three separate times, hanging my sun hat at various places including the Sheraton Cable Beach and the infamous Atlantis.

In 2010, I plan to take my family to the area once more, continuing the growing tradition of water-time fun in the sunny Bahamas. In fact, a Ritz-Carlton is in development on nearby Rose Island, a short ferry ride from Nassau. Having spent a full day on this idyllic island during the golden wedding anniversary celebration, I uncovered another water world waiting to be explored.

Where To Stay in Nassau/Paradise Island: A Place for Every Taste

The grand scale Atlantis is a coral pink, mega castle full of amenities, entertainment and adventure. It houses 21 restaurants including well-known Nobu and the Mesa Grill.
The main attractions for kids include the meandering pools and lagoons, aquariums and the giant water park, Aquaventure, which is home to hair-raising slides, lazy rivers and, says Julie Sondgeroth of World Travel Service in Tulsa, Oklahoma, “a mile long thrilling river ride through densely landscaped tropical jungles of extreme rapids, mysterious caves, and rolling 4-5 foot waves!” You can also swim with dolphins on site.

Tom and Jessica Biolchini of Tulsa took their infant and used Atlantis’ babysitting services. They were a tad nervous about leaving their baby with a sitter, but it turned out absolutely perfect. They were able to snorkel, dive, and swim with dolphins while their child was in safe hands.

This elegant British Colonial-style landmark property dates back to the early 1900s. After a $17 million makeover earlier in the year, this centrally located landmark continues to offer upscale accommodations and world-class charm in the heart of downtown Nassau. Its courtyard, gardens and pool are luxurious and it is convenient to stroll through the Straw Market and tour the business district while admiring the British Colonial architecture.

For the value-minded, Comfort Suites Paradise Island might be a wise choice. Its junior suites are conveniently located adjacent to the Atlantis. And, Comfort Suites guests have complete access to Atlantis’ facilities. Guests also receive a complimentary deluxe continental breakfast each morning.