There are so many things to do in Oklahoma City that I had a little trouble nailing down on Sunday plans–however, once it came to my attention that Oklahoma City Museum of Art was having one of their Free Family Days while we were there, that became a no-brainer. (If you missed parts 1 and 2 of our OKC adventure, click here to learn about Science Museum Oklahoma and here to read about the National Cowboy & Western Heritage Museum!)

We met our friend April for breakfast (despite falling asleep at dinner the night before at 9 p.m., Joss woke up bright and early Sunday morning!), and still had an hour or so to kill before OKCMOA opened at noon. So we elected to add Myriad Botanical Gardens to our itinerary, as it is just a few minutes away from the art museum.

There was an OKC Thunder event happening adjacent to the gardens, so parking and navigating was a little tricky, but we eventually found a spot across from the garden. I’m used to Tulsa Botanic Garden, which is out in the Osage Hills off a dirt road, or even Botanica in Wichita, which is located in an older neighborhood, so for some reason it surprised me that Myriad was located in the heart of downtown (at least, that’s what it felt like. I don’t really know where “the heart of” OKC’s downtown area is. But it was definitely beating nearby!) 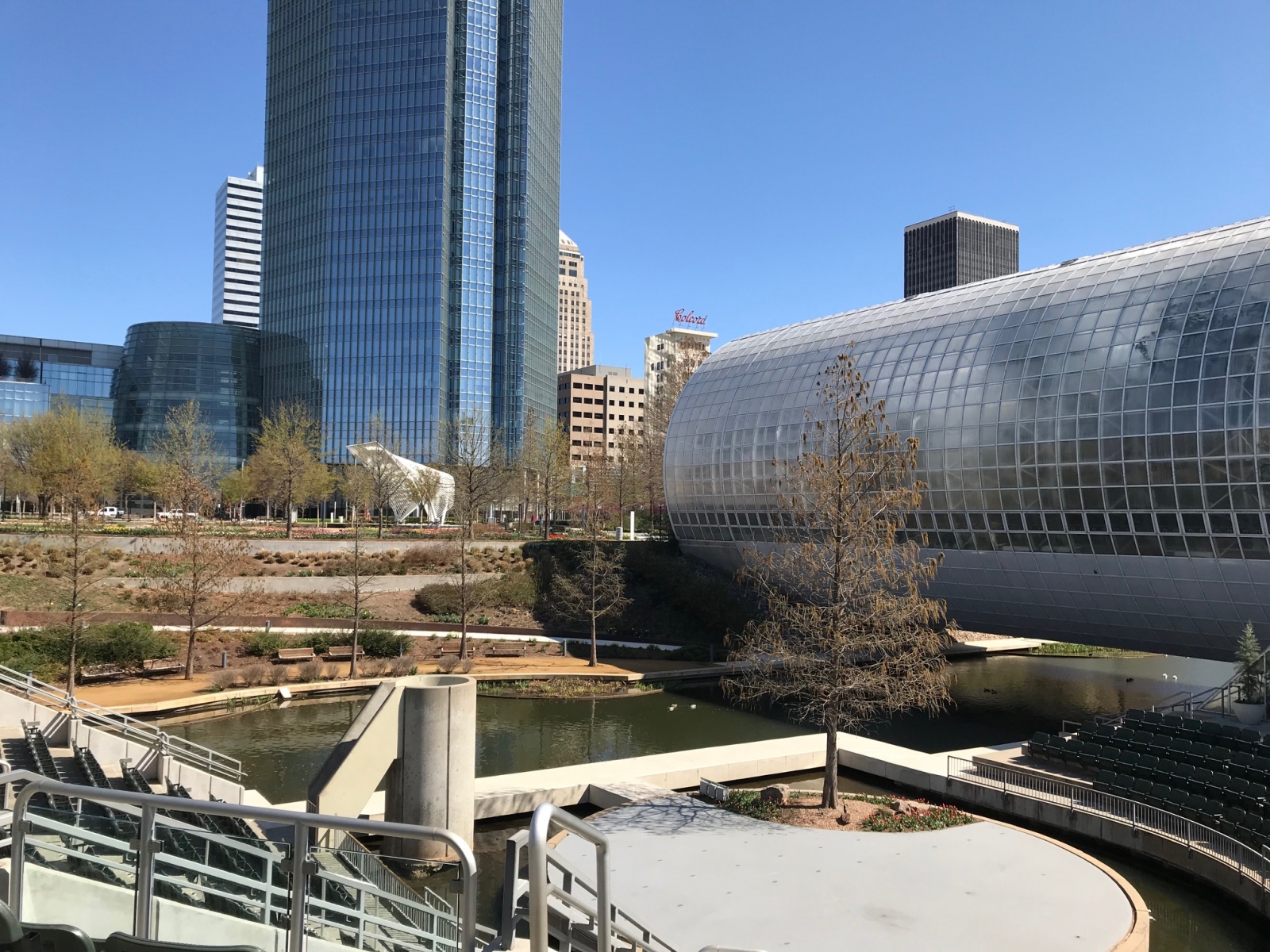 We didn’t go inside Myriad’s massive Crystal Bridge Conservatory (see above photo), so I know we didn’t get the whole Myriad experience; but it’s free to run around outside and, between the carousel and the children’s garden, we had plenty to do during our hour-to-kill. 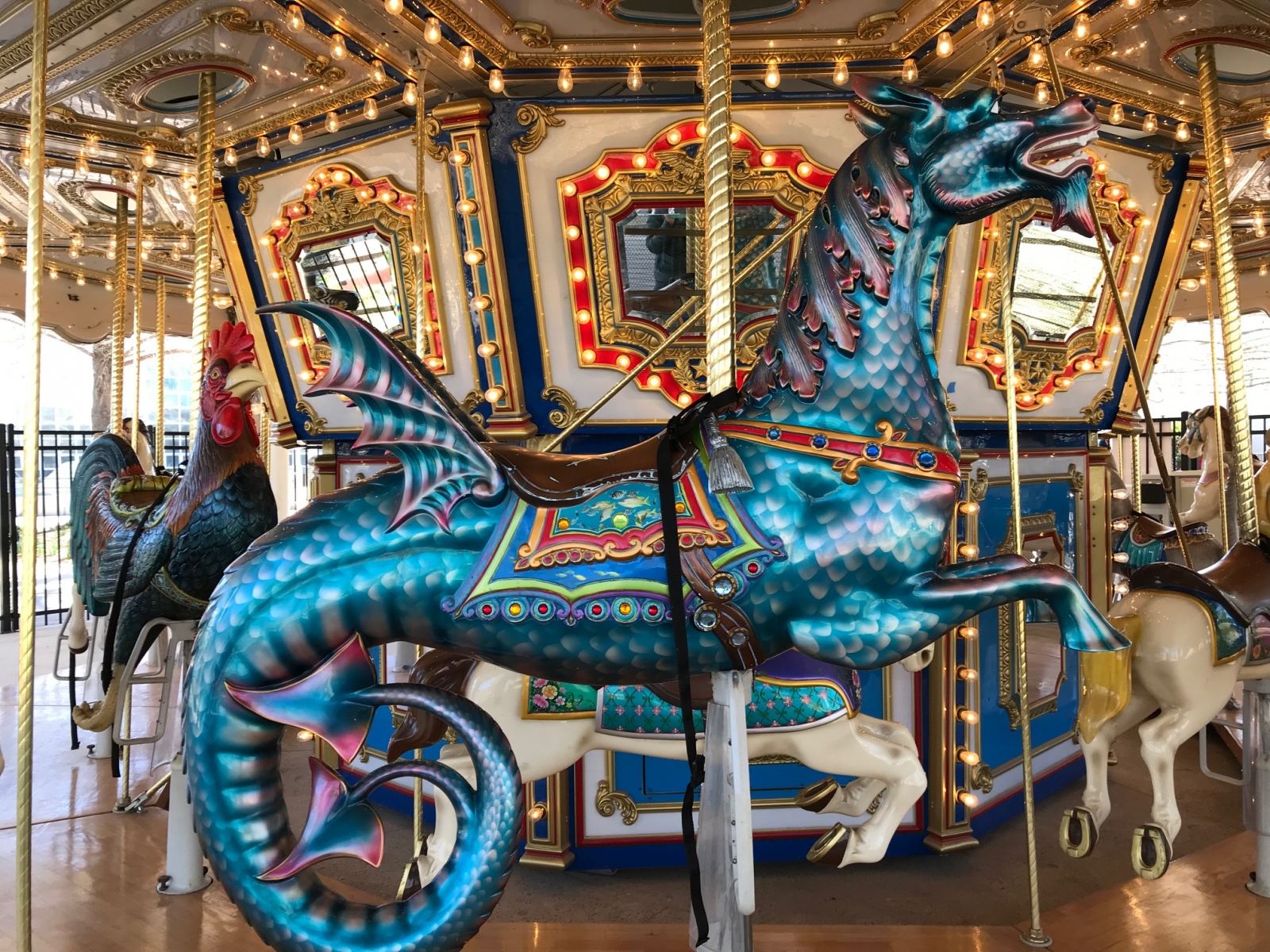 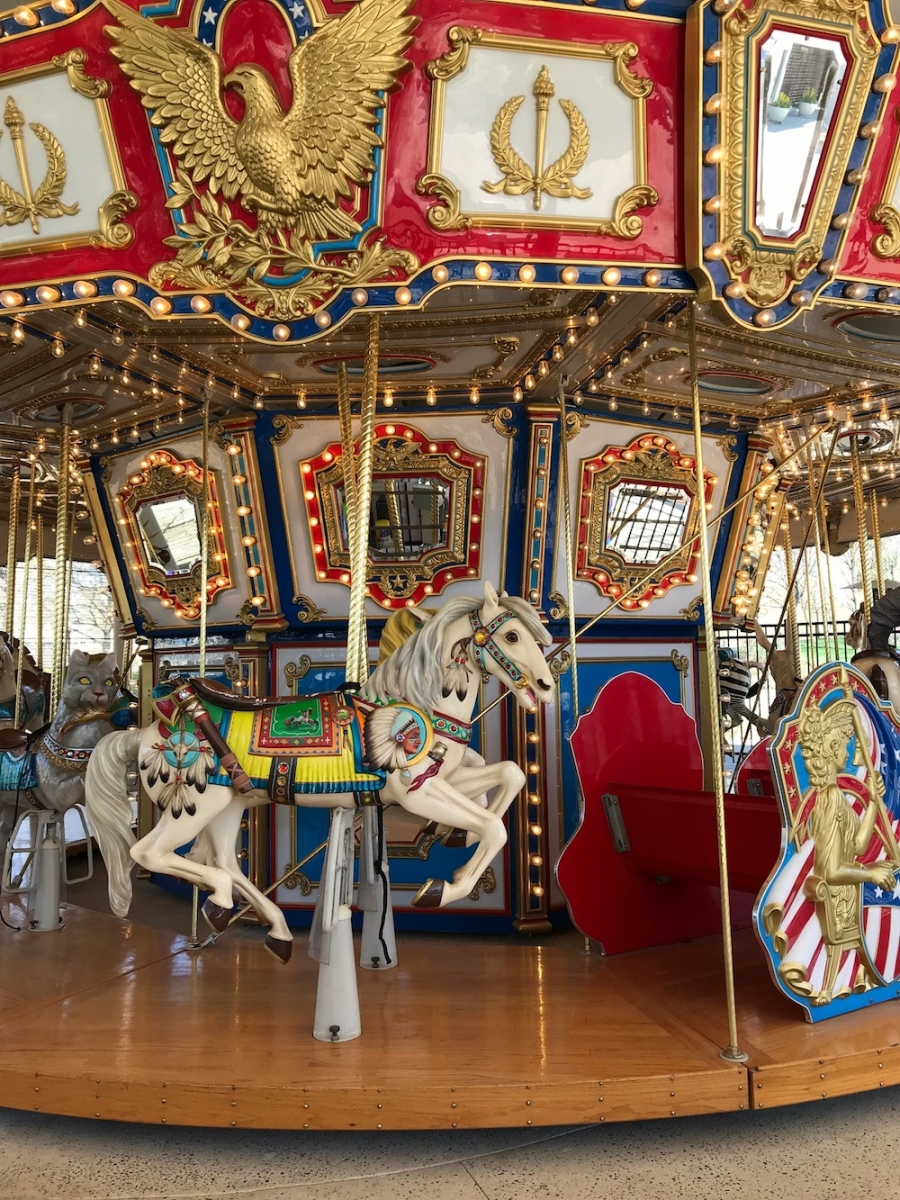 The Children’s Garden honestly looked a bit dated in places–there were some wooden elements that could have done with a coat of paint, but that didn’t keep it from being delightful, and it was a nice mixture of play and educational elements. Joss’s favorite was the merry-go-round–you know those old ones that you used to hang onto for dear life while someone spun you around in a circle? This was like that, but safer! There was even a protected seat that Joss could sit in, and another that I fit into, so Daniel pushed us both around, to our great joy. 😉 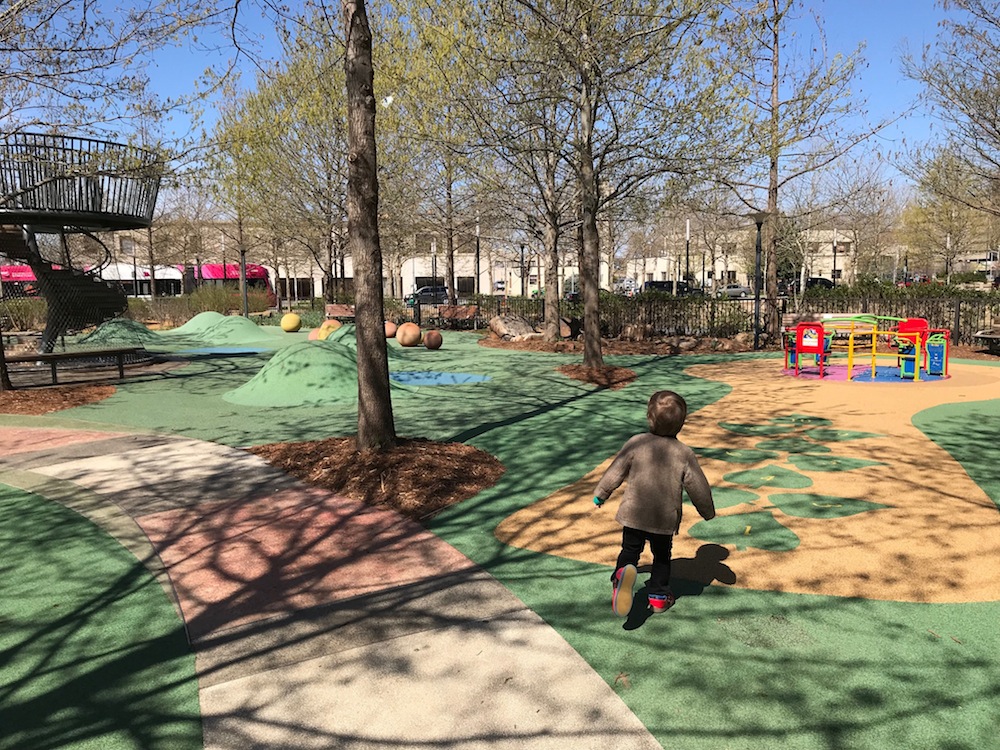 See that brightly colored thing to the right? That’s what I’m talking about, ha. Joss is making a beeline right there! 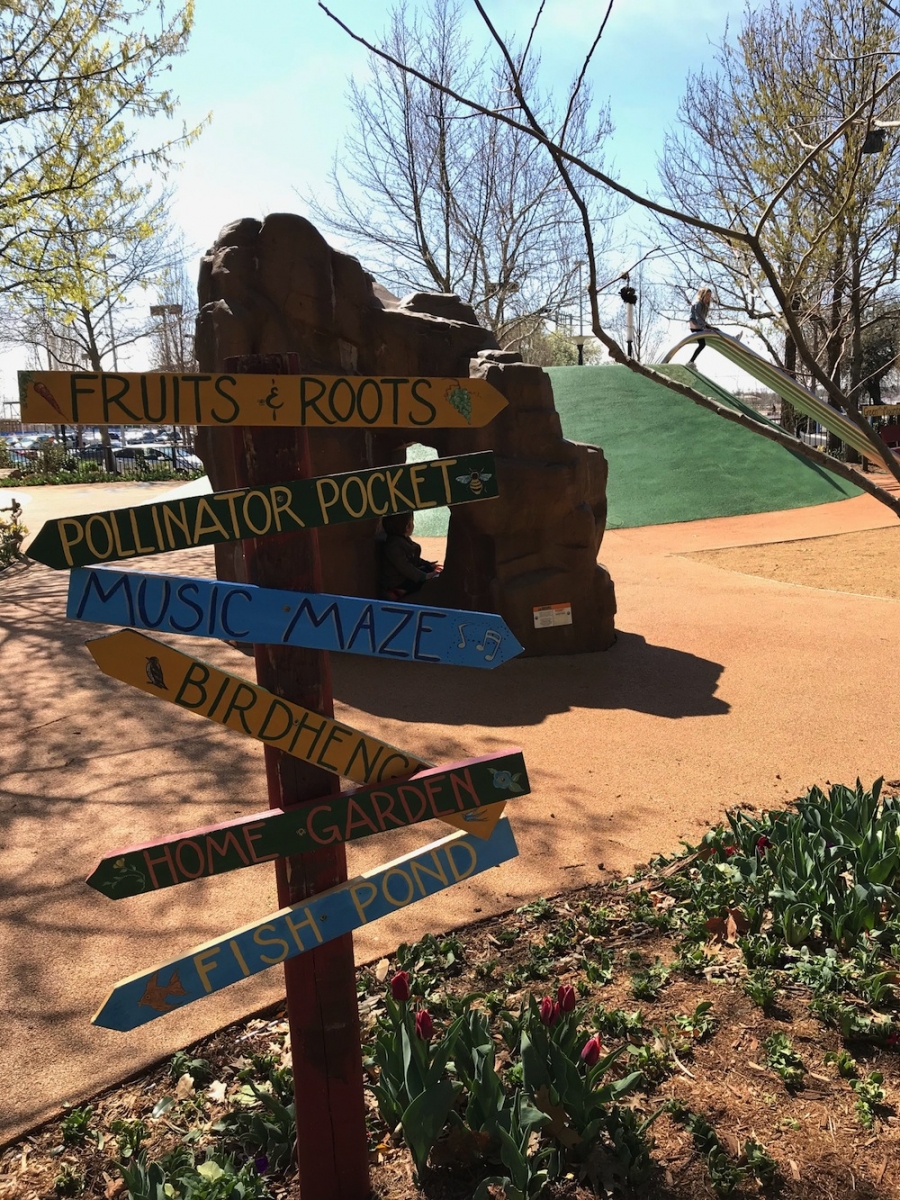 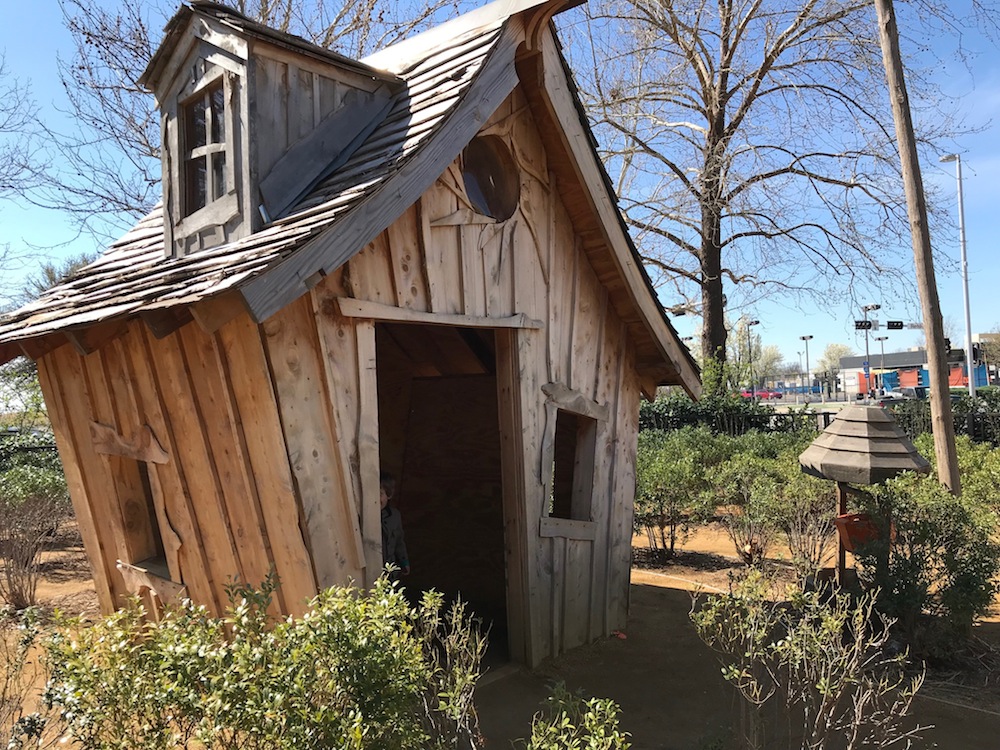 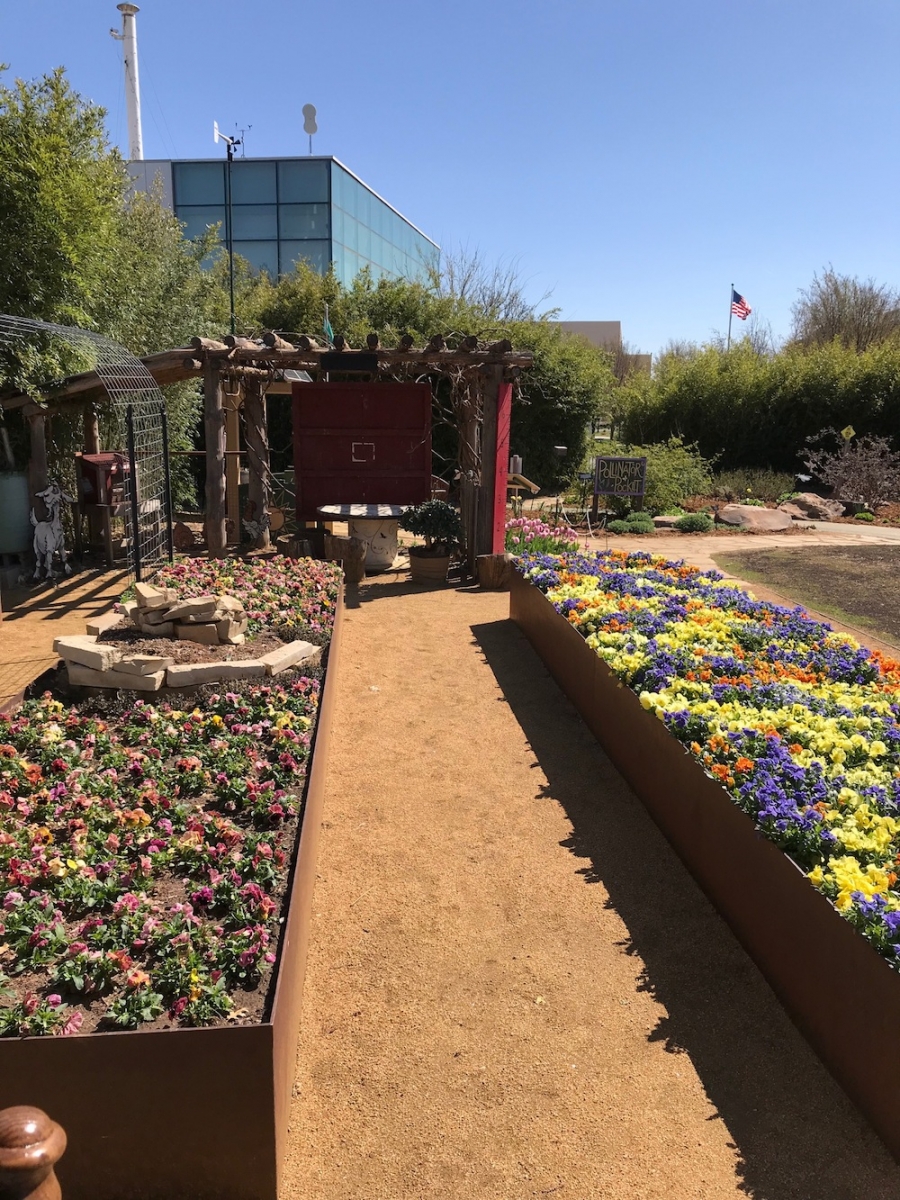 Sonic sponsors Free Family Days at OKCMOA periodically, and Joss was so excited to be greeted by a Sonic Slushie and Hot Dog upon our arrival! 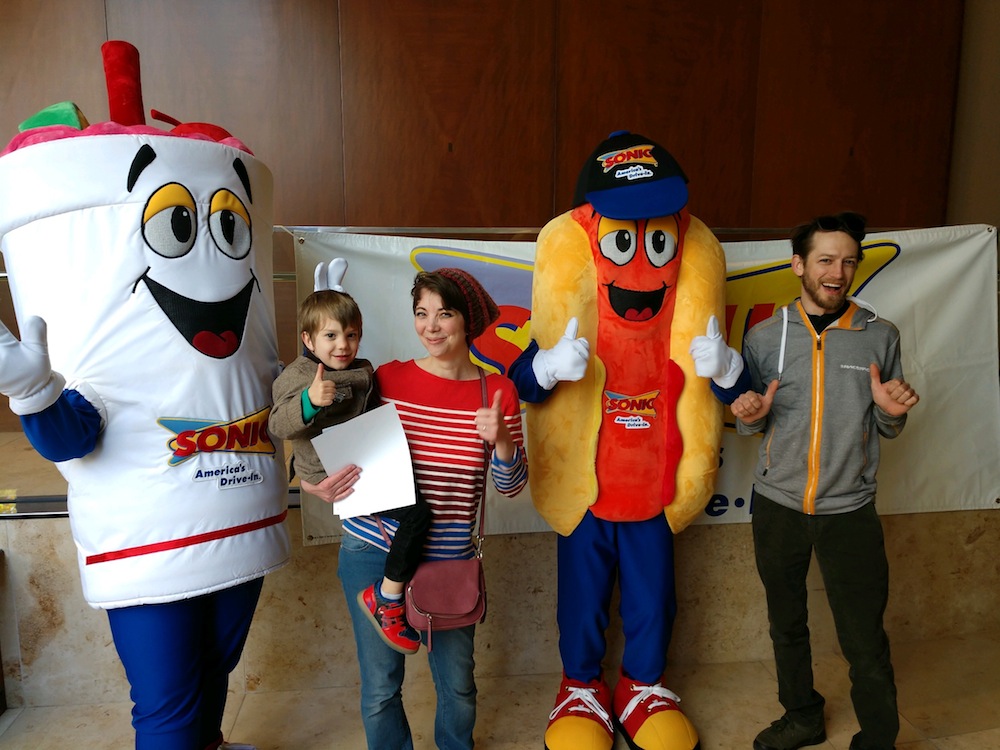 Like Philbrook’s 2nd Saturdays and Gilcrease’s Funday Sunday, Free Family Day at OKCMOA included art activities for the whole family, although it was so busy we didn’t spend too much time doing this. We did decorate paper crowns, courtesy of MetroFamily Magazine–Joss wanted me to draw a slushie and hot dog on his so he could show his new Sonic friends–and participate briefly in a community sculpture project, although Joss decided he wanted to take his home and also that I did not do a very good job helping him create a sculpture. 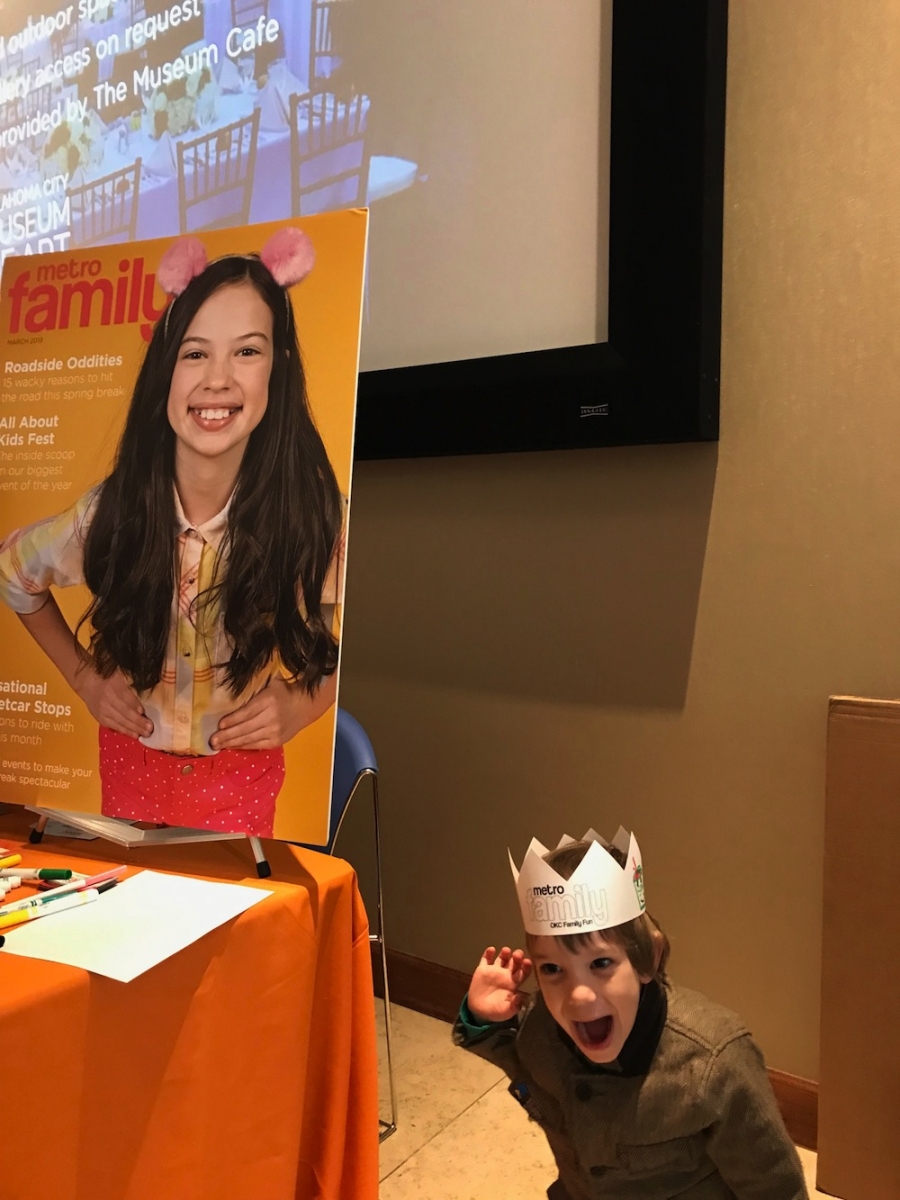 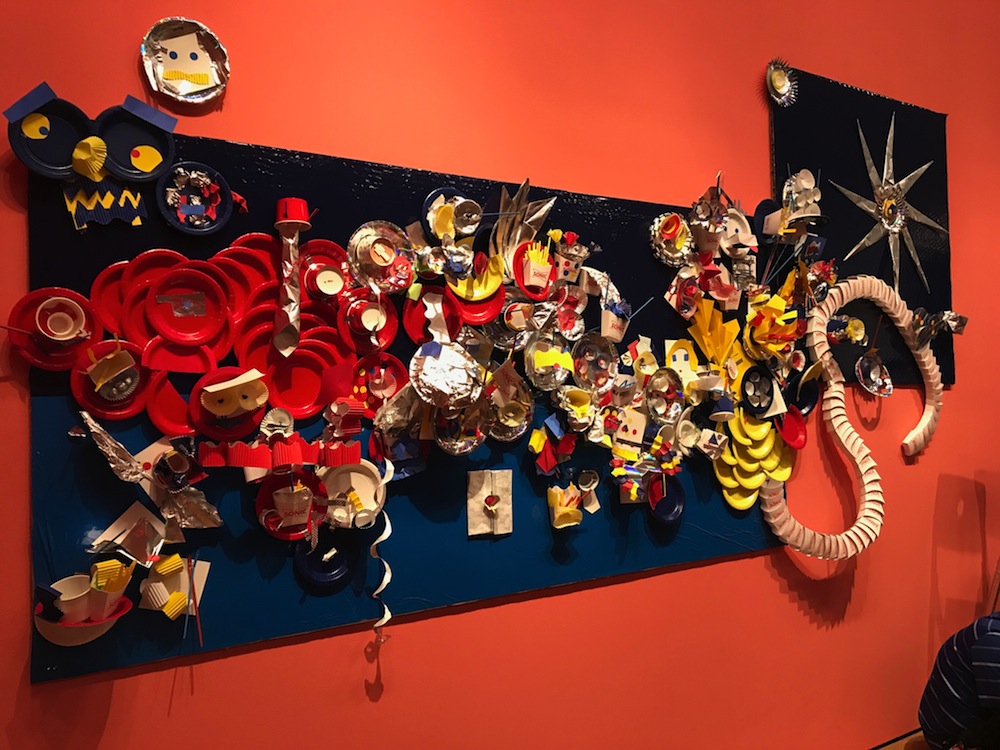 “Off the Wall” was a great exhibition even for kids; Joss enjoyed the sheep that greeted us as we entered the room, and another sculpture made use of commercial paper goods of all varieties, including Batman paper plates, which he appreciated. 🙂 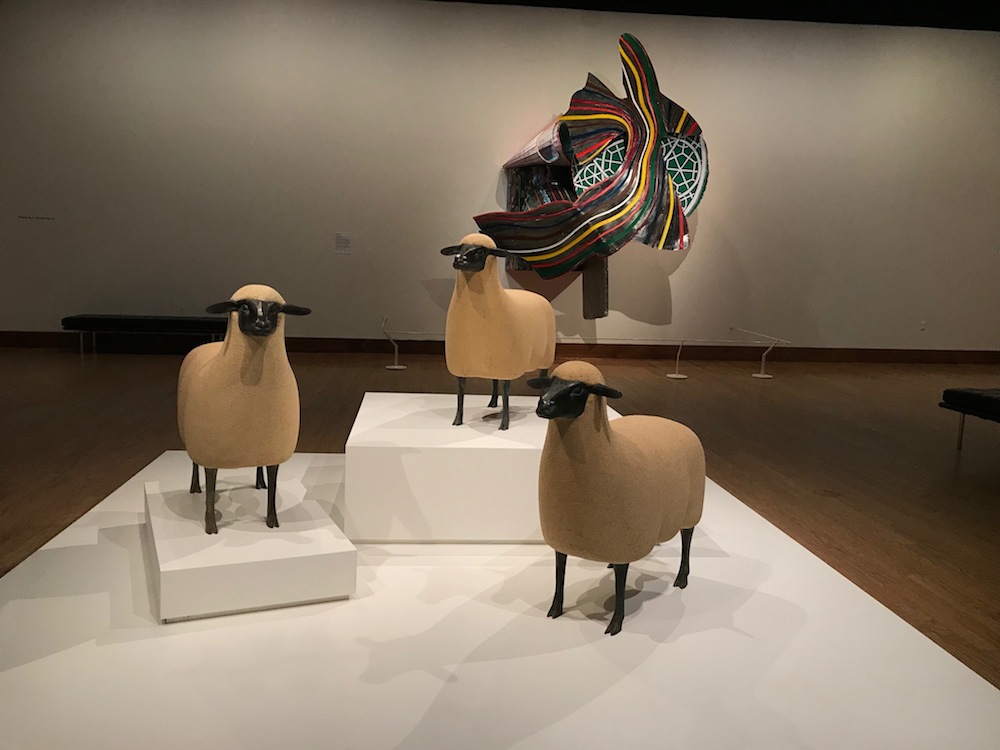 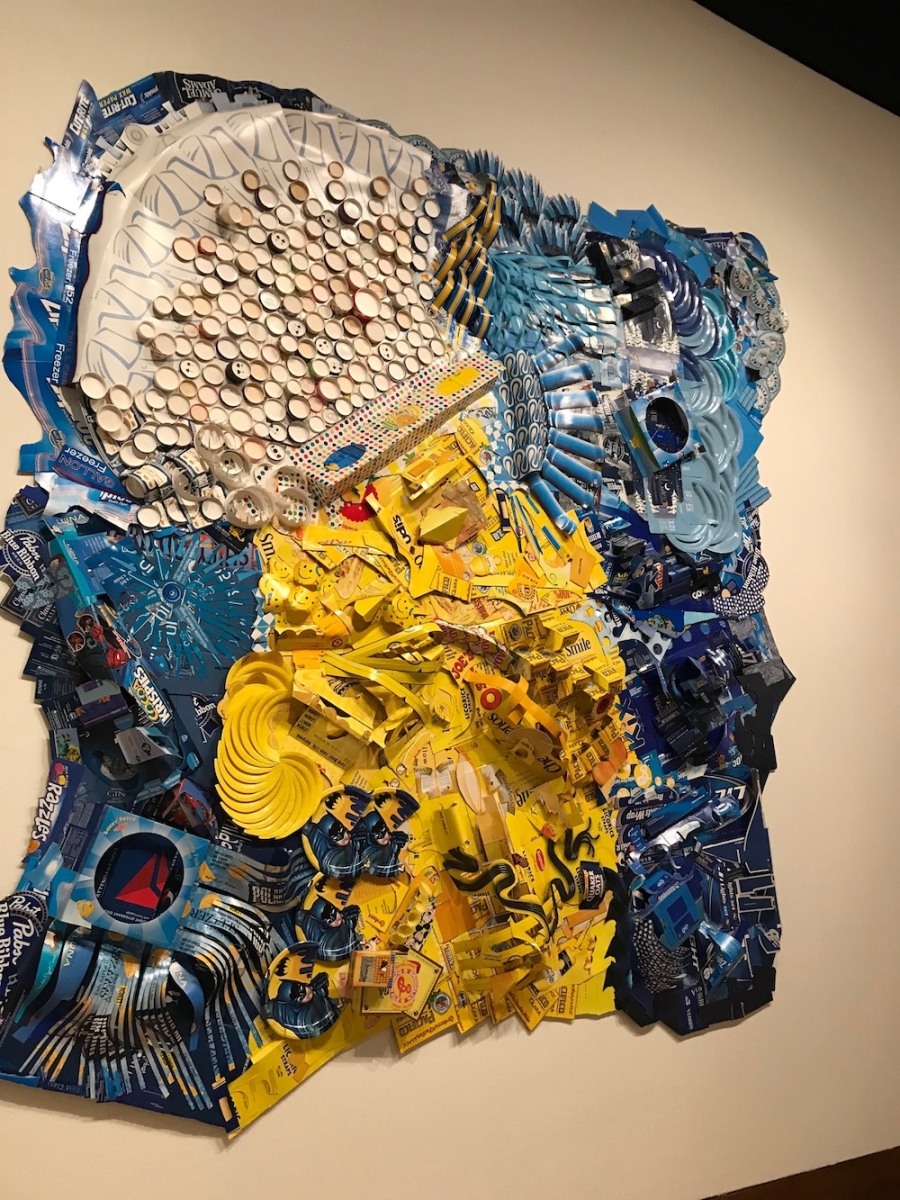 The star of “The Changing Face of the Museum’s Permanent Collection” was their new Kehinde Wiley acquisition. There was a constant line of visitors standing in front of this work, which was fun to be part of. 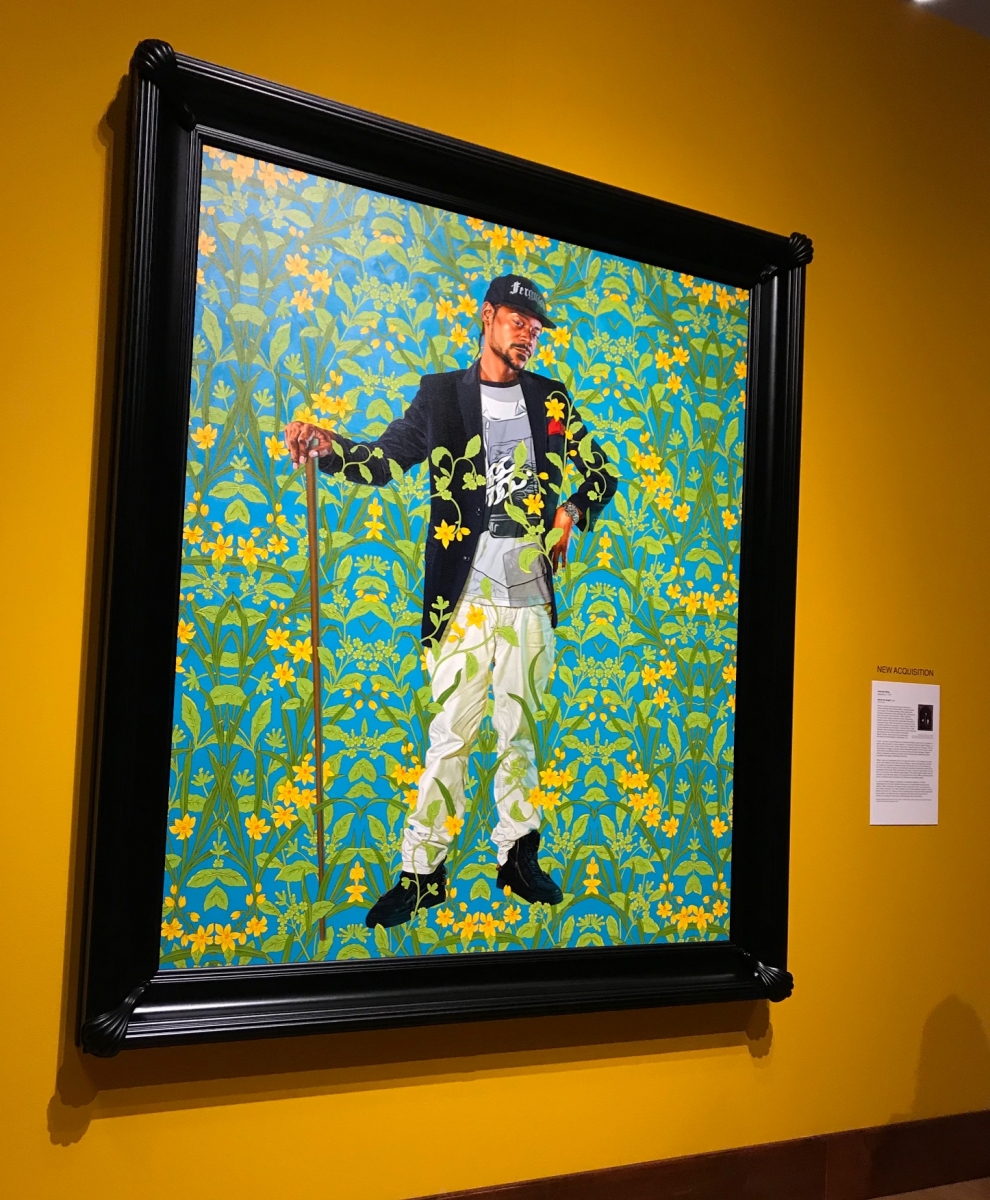 I also liked how this exhibition was laid out. Each room had a different theme: for example, paintings of the sea; paintings of the human body; portraits; still lifes, etc. This made it easy for even someone who hasn’t taken an art history class (or who has, like me, but still needs plenty of help) to understand what they are looking at and to be able to really see differences in how earlier works and more modern works approach the same subject. 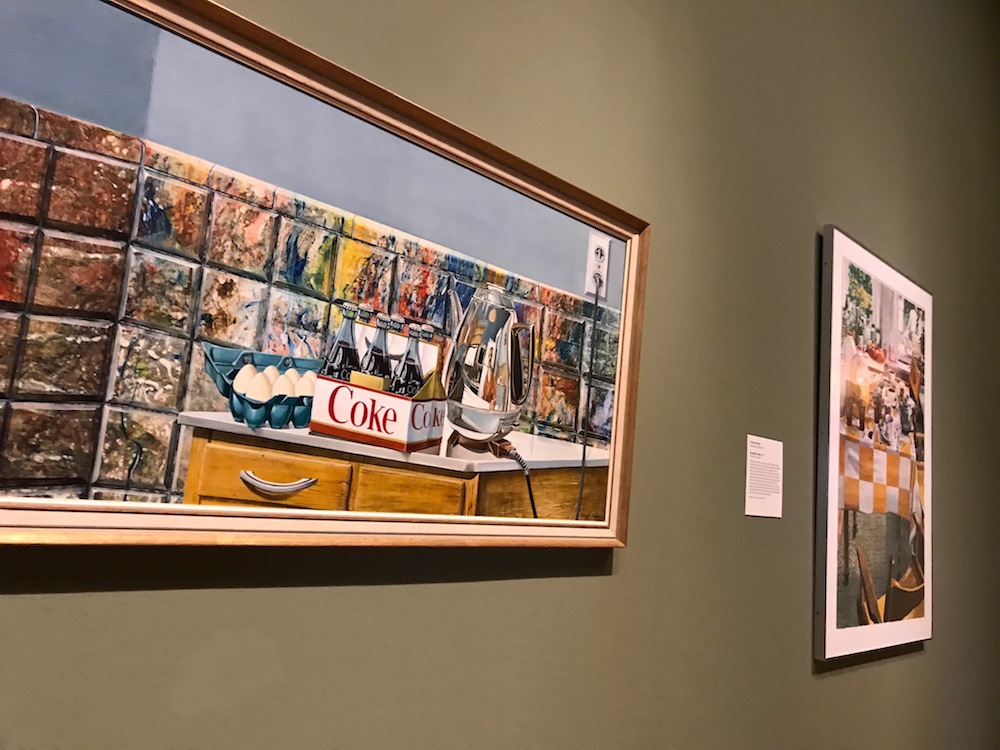 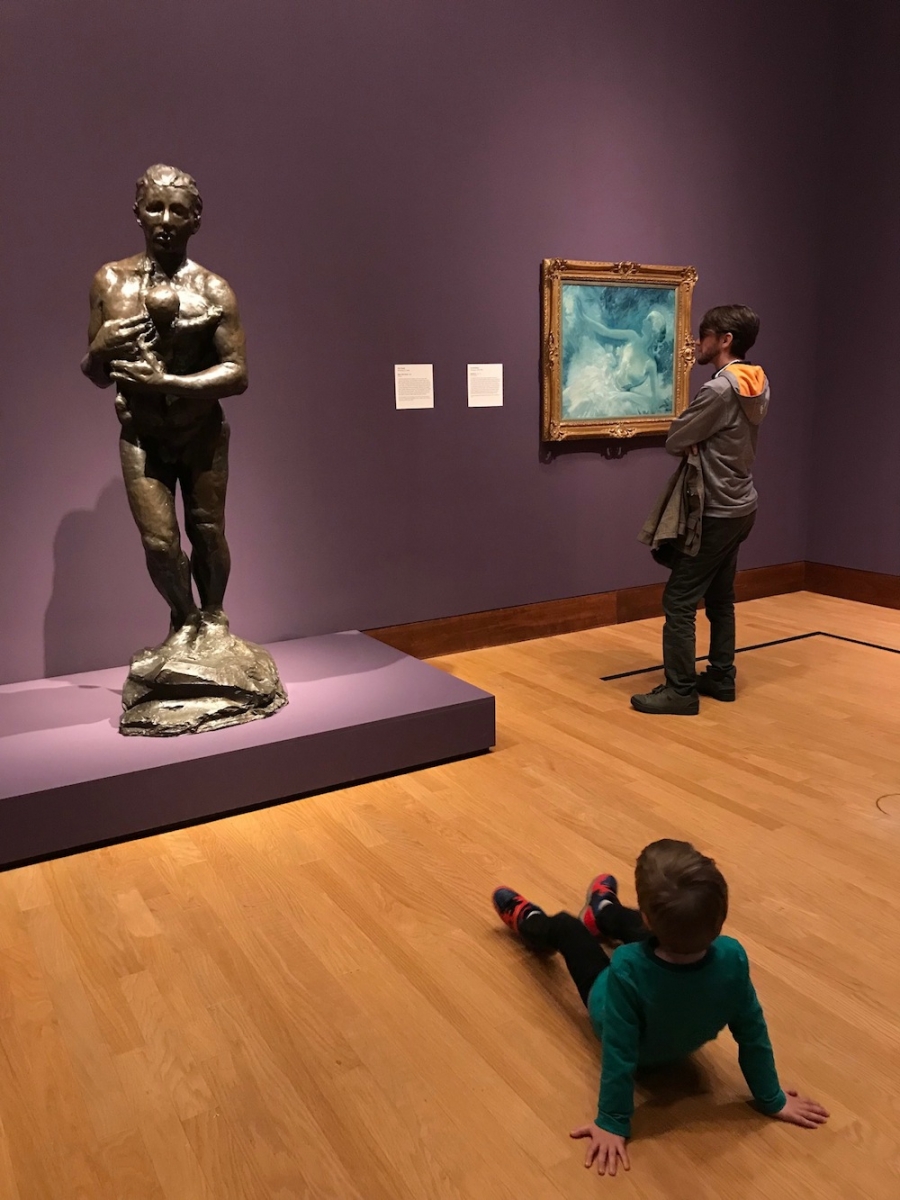 Finally, we made it up to the third floor for the Dale Chihuly exhibition! Of course, the massive Dale Chihuly chandelier greets you as you come into the museum, but this is just the beginning of all the gorgeous glassy goodness! 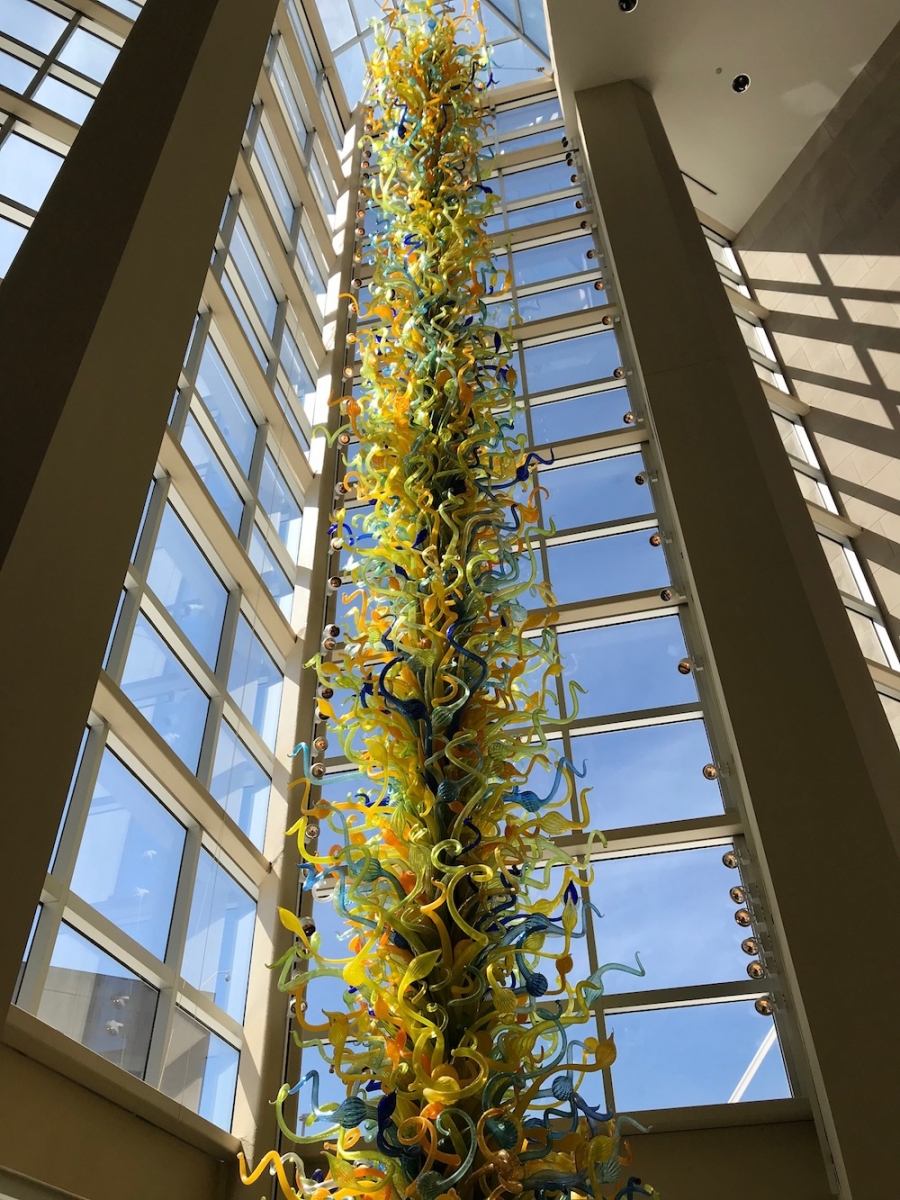 Since I just mentioned heading to the third floor, this might be a good time to tell you that we got a little lost at first. The art activities were located to the right of the main entrance, so after we turned right and finished the activities, we kept heading that direction. However, that takes you to the dining area of the museum, and not to the main galleries, which are located to the left of the main entrance and then up the giant staircase that is one of the first things you see on walking in. You’re welcome 🙂 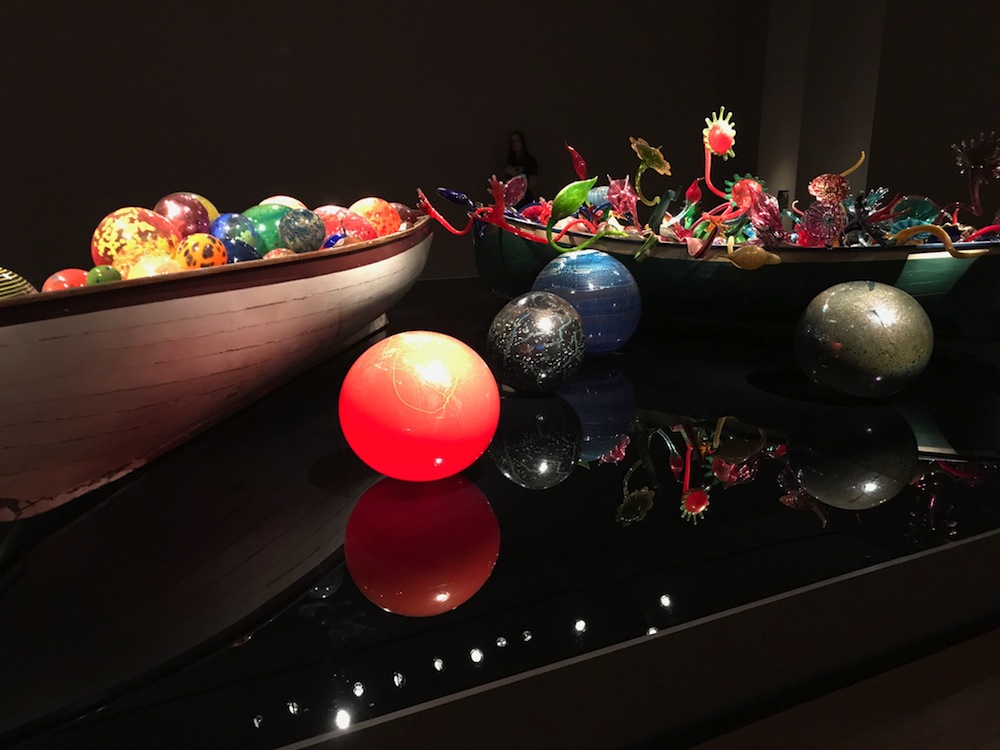 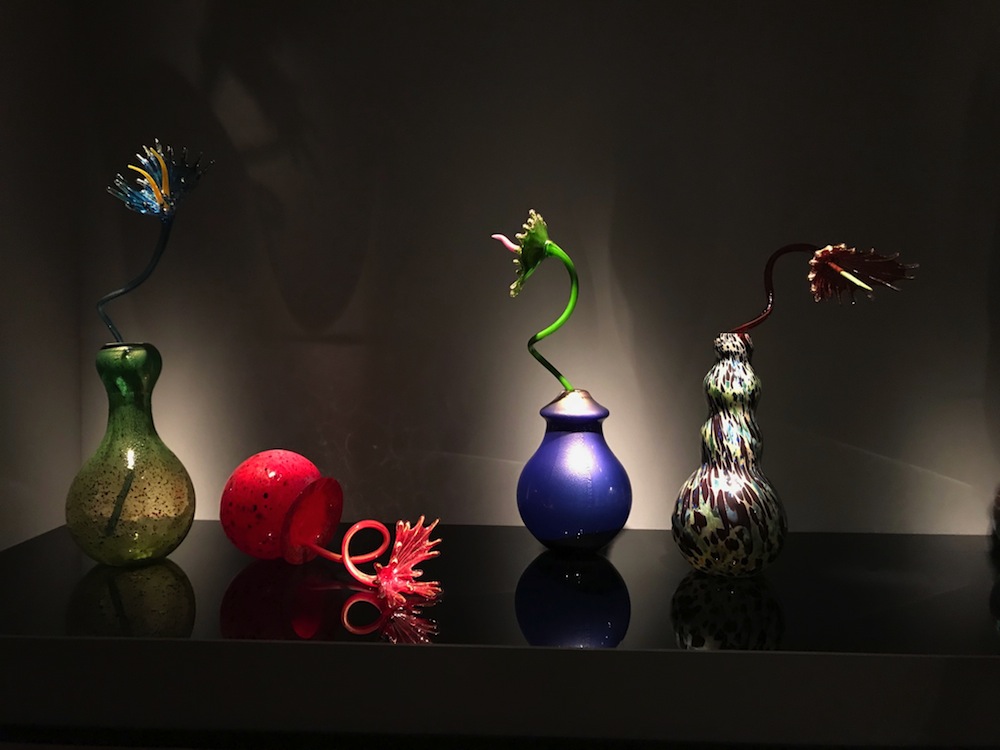 Joss loved the canoes full of balls and flowers! And one little girl wanted to “fix” the red flower vase that had fallen over.

If you’re considering a trip to the OKCMOA, this summer would be a fantastic time to go, as they have a Van Gogh, Monet and Degas exhibition opening June 22!

After this, it was time to head home! We decided to break up our return trip with a late lunch at Rock Cafe in Stroud, which is directly off Route 66! Not only has Rock Cafe been featured in a Guy Fieri show and other publications, but the owner also inspired the character Sally Carrera in Pixar’s “Cars”! So there are several fun photo ops around the cafe as well as a gift shop where you can purchase Route 66, Rock Cafe and “Cars” merchandise. 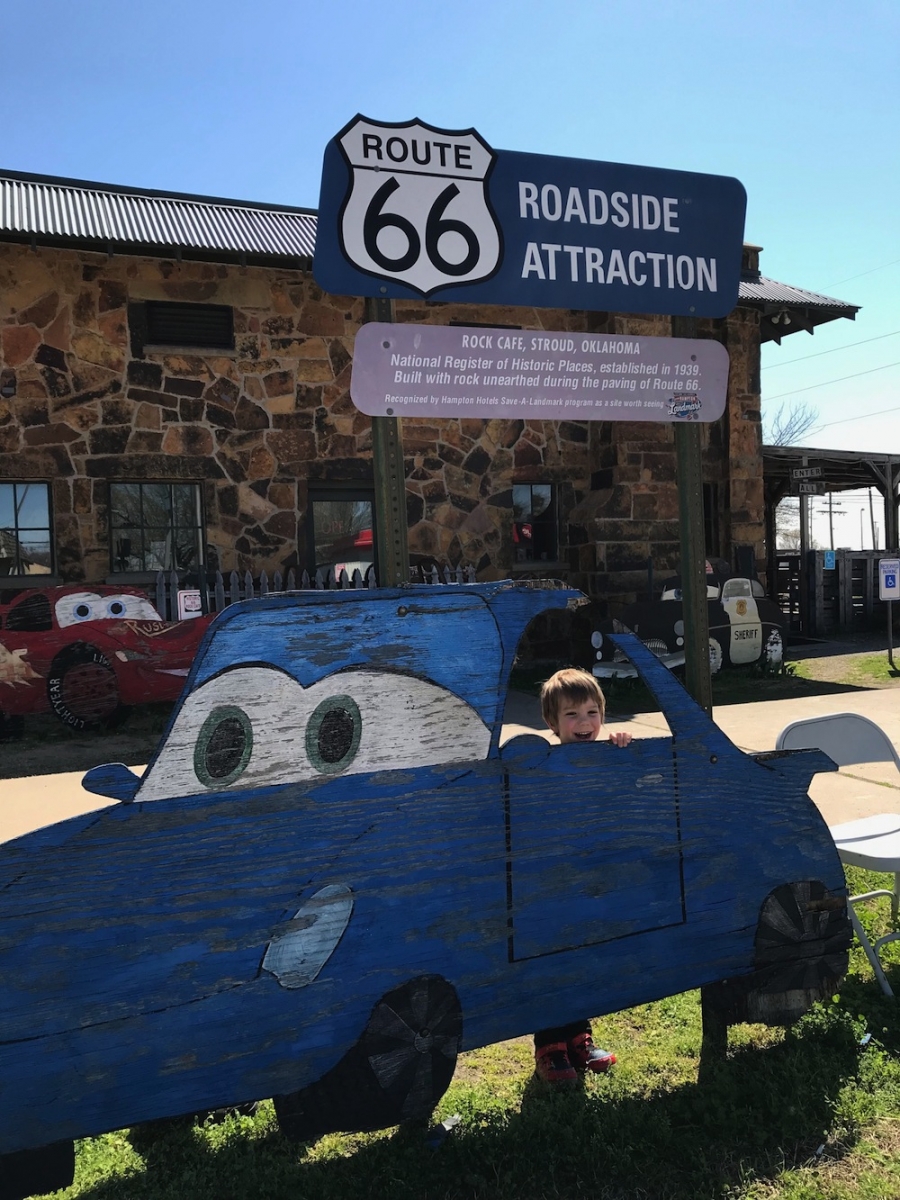 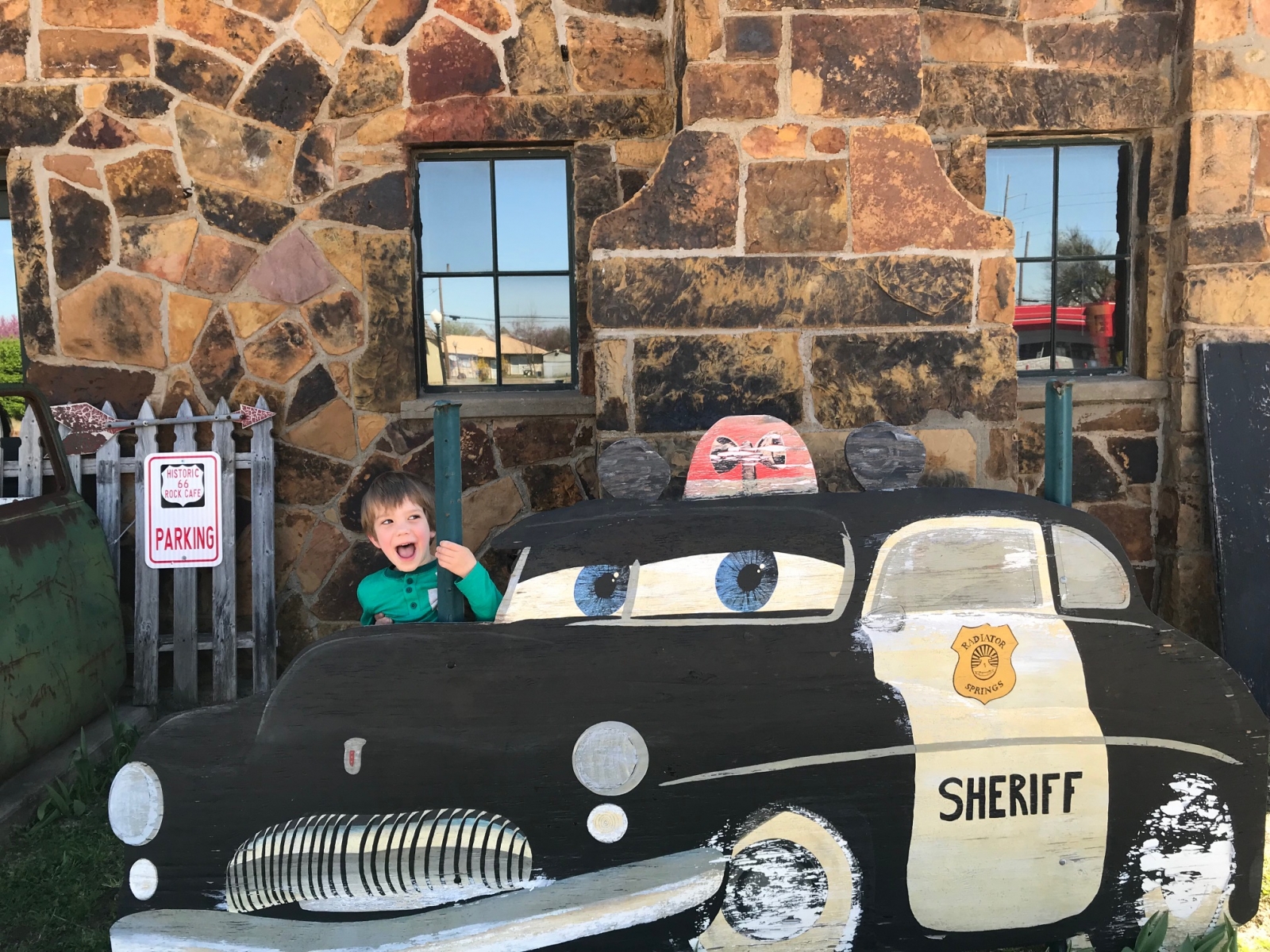 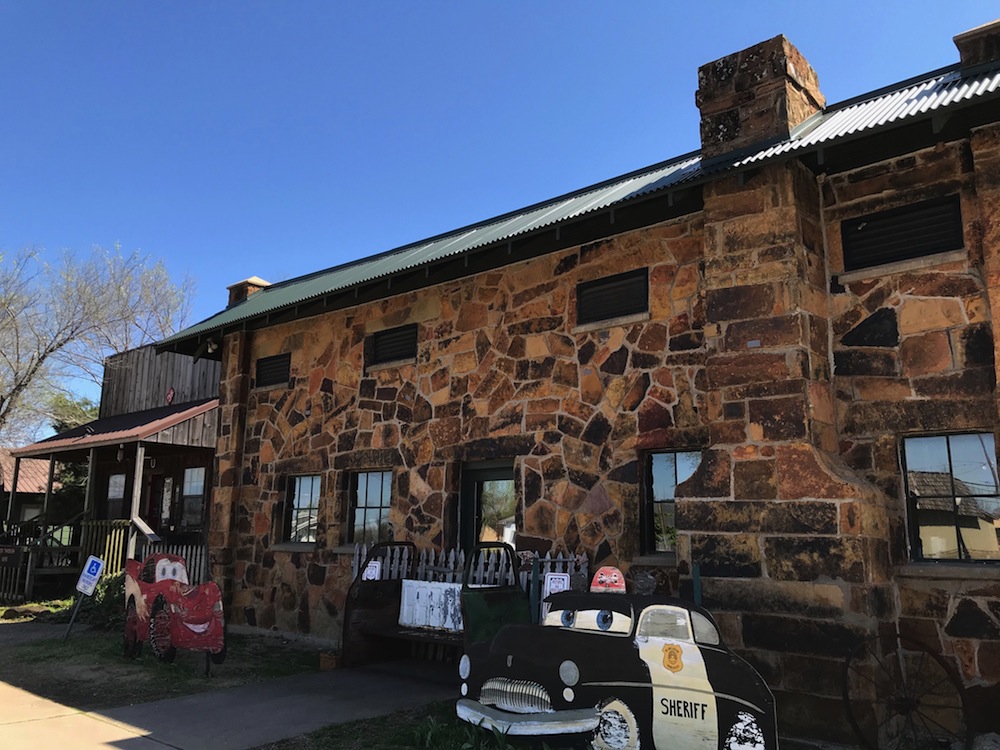 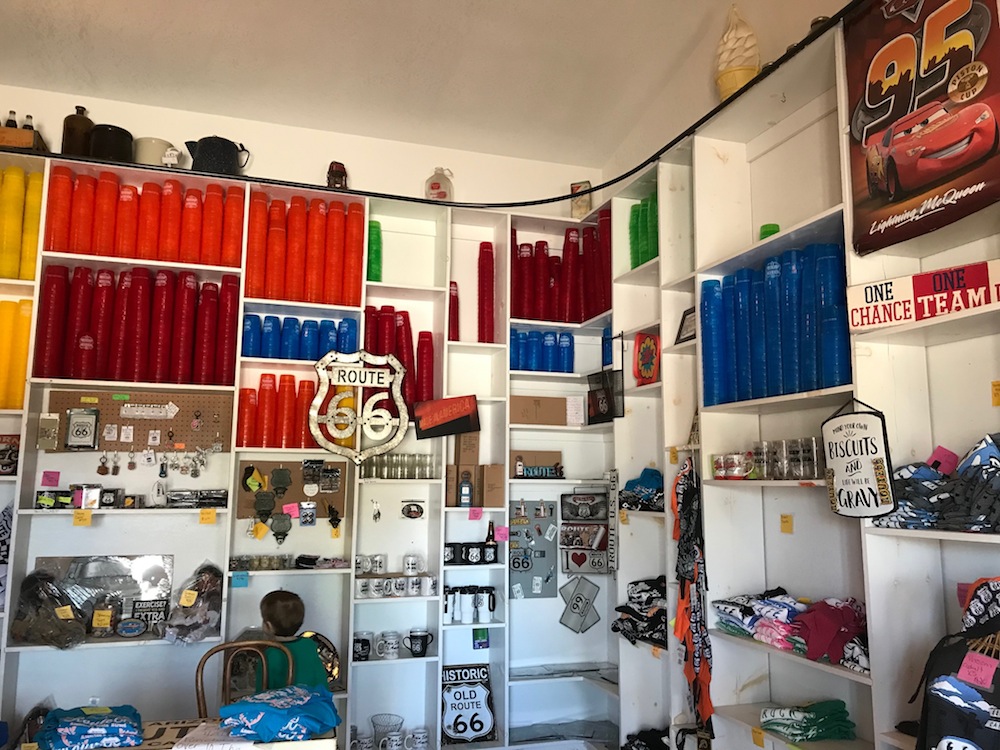 Everyone who worked at Rock Cafe was incredibly nice! From cheerfully cleaning up a water spill (my fault!) to bringing Joss a hamburger “puzzle” to making sure we signed the guest book and even handing Joss a sharpie so he could sign his name on the wall in the bathroom, it was a really great place to grab a bite to eat. Plus, the food was good, too! I had the cheese-laden spaetzel (as featured on “Diners with Guy”). Delicious. 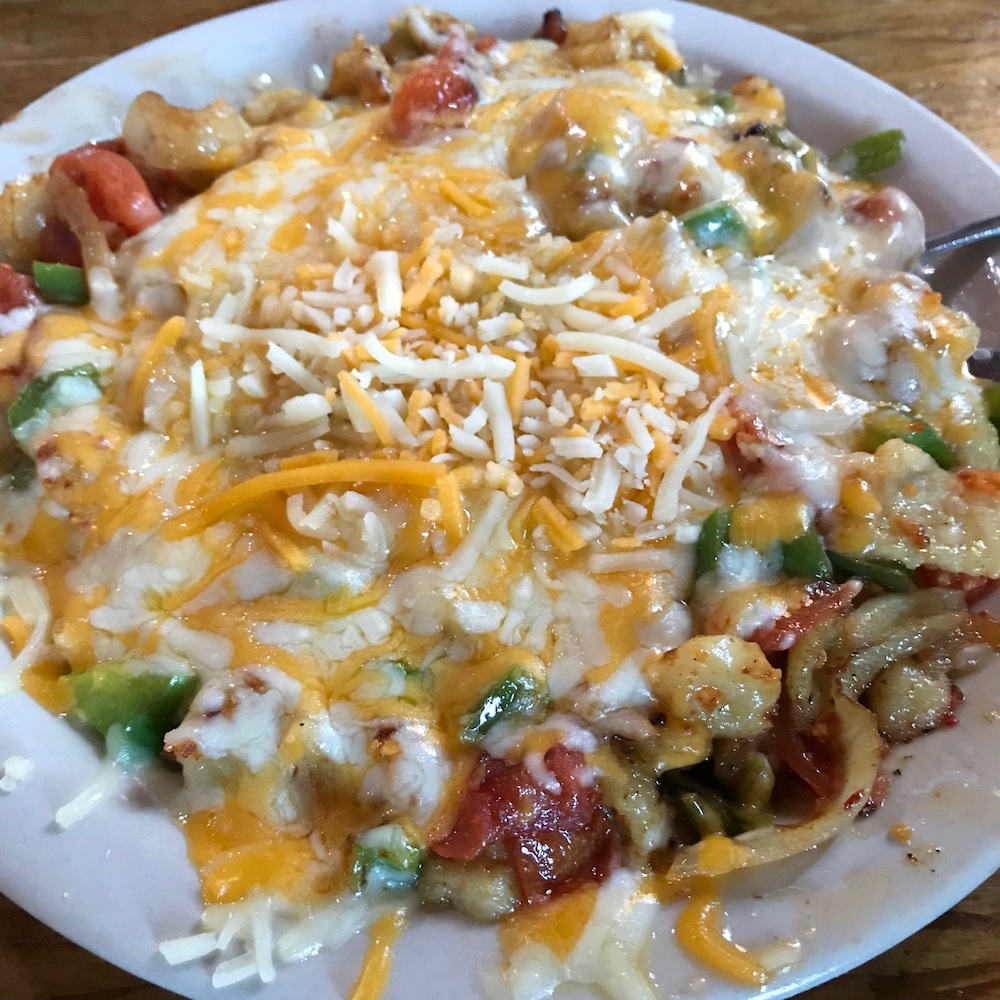 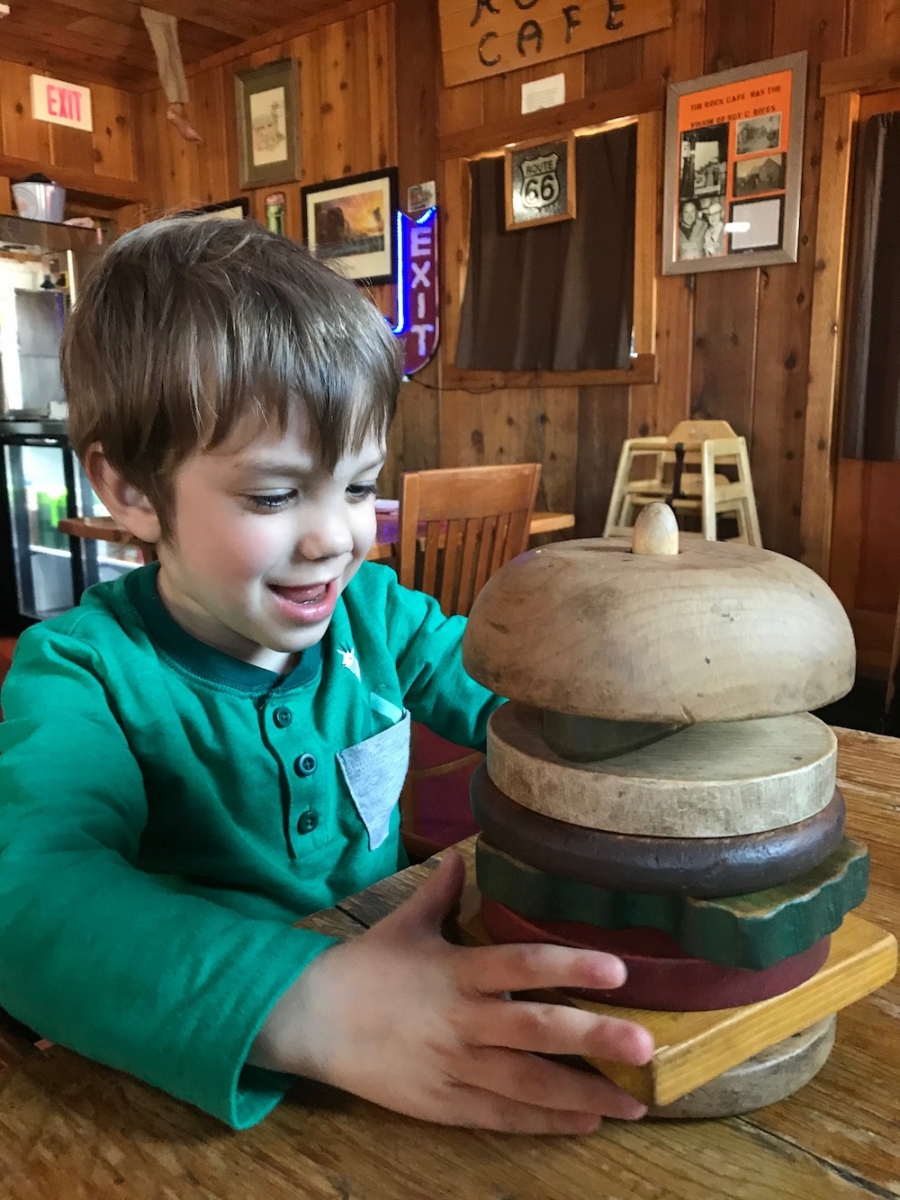 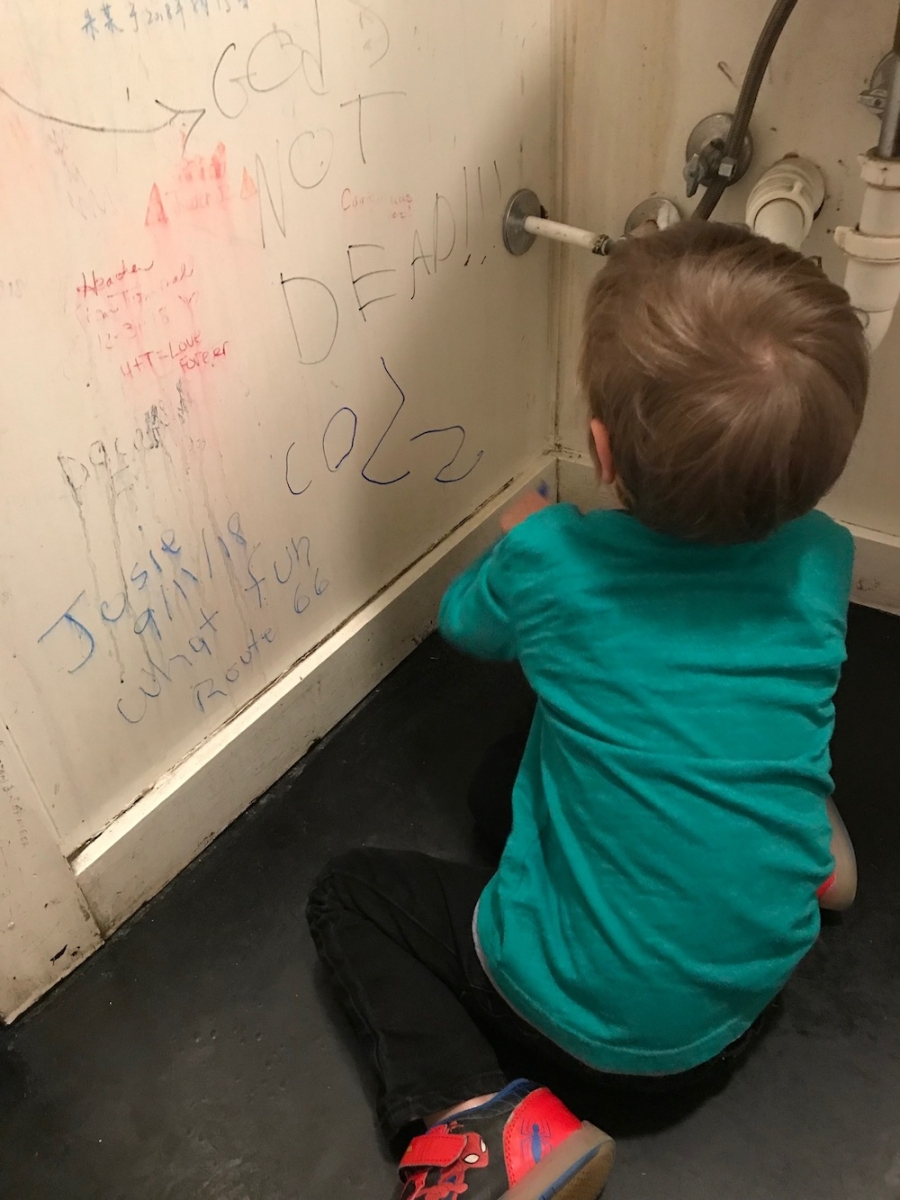 Now, Joss hadn’t previously seen the movie “Cars” before we went to Rock Cafe, which didn’t diminish his enjoyment. After returning home, however, I decided it was probably worth an Amazon purchase–and now I keep tearing up at the ending! So good! Plus, it could be a neat way to introduce your kids to Route 66 if you are planning to spend any time on the Mother Road.

Alright, this just about wraps up our Oklahoma City road trip; but since I have a few more photos to share, I’m going to write one final post for next week about some of the different OKC districts and some of the delicious restaurants we ate at in the city.

Have you been to Rock Cafe? Do you have any favorite Route 66 stops? Let me know in the comments! 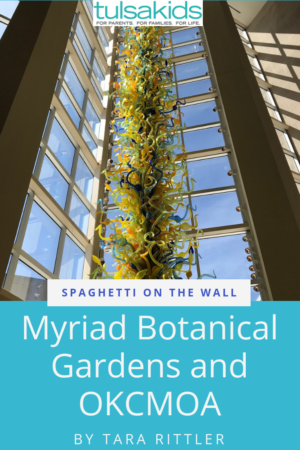