In my blog today, I am going to talk about the hardest thing I’ve ever had to do as a parent, letting go.

The Ultimate Act of Selflessness

I remember when I was in my 20’s, I finally left living at home with my mom to go out into the world and live on my own.

I have told you unapologetically in previous blogs how much of a mama’s boy I have always been. Mainly because my parents divorced when I was little and my dad moved 100 miles away.

I’ve also told you in previous blogs that I am the kind of writer that will try to give you all sides of my parental experiences, not just the happy, shiny moments.

Every family goes through hard times, and I think if we all stick together as parents we can help each other through. Even if it’s as simple as remembering that you’re not alone, and the same scenario has happened to many other families, and things have ended up just fine.

The reason I am telling you all of this is because I have made the difficult decision to send my son to an Indian boarding school. He has gone to Tulsa Public Schools from pre-K till now. He is in seventh grade.

In such a drastic situation there is a lot of finger-pointing.

I try to be a person that always looks in the mirror and asks myself how it went so wrong? But more importantly, how can I make it right? Since my son has been in school at 5 years old, he has struggled. He definitely gets that from me, as I had much difficulty getting through school, even college.

With him, I tried everything I could think of. Being a single parent I’ve not had a “significant other” to bounce things off of, so I’ve taken countless parenting classes. I’ve tried everything in the book: continuous counseling for my son (and me), tutoring, reward systems, punishment tactics, medication, asking friends and family for advice, changing schools, I tried to lead by example (showed him pictures of when I was in school, hung my diplomas in the kitchen, I took a class at TCC, etc.), staying involved and volunteering at his schools, but nothing seem to reach him or motivate him.

His struggles, like so many others, were compounded by the pandemic. Then, when remote learning was over and he was back in a classroom, he ended up at a new school that was way too big and crowded for someone like him. He needs special attention and was not getting it, so his mom and I made the gut-wrenching decision to send him to an Indian boarding school.

We have been very blessed that his Native tribe has provided such wonderful resources to help him. I must give a big thank you to Jay Hester at TPS Indian Education and his counselors at Indian Health Services for such wonderful guidance! Wado!

We visited numerous locations before ending up where he is at now. He is almost 200 miles away down by Lake Texoma.

As terrified as I was to let him go, I knew that it was best for him. Being in different surroundings with a more structured daily (and nightly) routine will help him focus on getting back on grade level education-wise and behavior-wise.

And I hope and pray being among other kids in his similar situation he will be inspired to become more than just a gamer or YouTube influencer.

I remember like it was yesterday, taking him to preschool for the first time and witnessing some children, literally holding onto the door jam for dear life, screaming and crying that they didn’t want to go, as their mother or father tried to carry them into their pre-K classroom. I saw how that affected some of the other kids who were sort of borderline on the whole situation, and then they started to erupt also. I nervously looked at my little son, worried that he may join in on all the objections going on, but he never did.

He may not have been a good student after the books started opening up, but he never once cried or said he did not want to go. Since he was five years old, he was very independent and adventurous in that respect.

And such is the case now, seven years later. Me on the other hand? I felt like a deep, dark hole was being drilled through my heart, but tried to keep it together for his sake. Atticus took it like a champ, and in fact HE inspired ME to feel more secure about the whole thing!

That didn’t stop me from sobbing uncontrollably for the first 40 miles back to Tulsa. I knew if I pulled over I would never stop crying so I kept driving, literally and metaphorically.

For the past 8 years I’ve not been away from him for more than a couple days, and that was only once just two months ago.

He has now been there for one full week, and as far as I can tell, he is getting acclimated very well. He has a roommate! I didn’t have a roommate, other than my own brother, until I was 22 years old!

As parents, it is our duty to teach our children to be able to take care of themselves once they are on their own. At 12 years old, my son knows how to do his own laundry, wash his own dishes, and even though he won’t need to do this there, he could totally mow the yard and shovel the snow off the driveway, if needed.

As much as I didn’t want to see him go, I know it is time to let him go.

His new residence sits on hundreds of acres of beautiful rolling hills in South Oklahoma. The campus consists of approximately 10 brick “cottages” that have 4-6 bedrooms each that can accommodate 2-4 kids per bedroom. Each cottage has its own computer space, kitchen, living room area and laundry room. Each cottage has “house parents” that live their with the kids. Atticus’ house parents are a wonderful elderly couple who are both retired teachers of 30+ years. One was even a principal of a middle school and taught paramedics, which is perfect for Atticus! He can help him learn and if (when!) he gets hurt he can fix him right up!

This is him shooting some hoop in the court yard which is conveniently situated in the middle of all the cottages. His “Cottage D” is in the background. 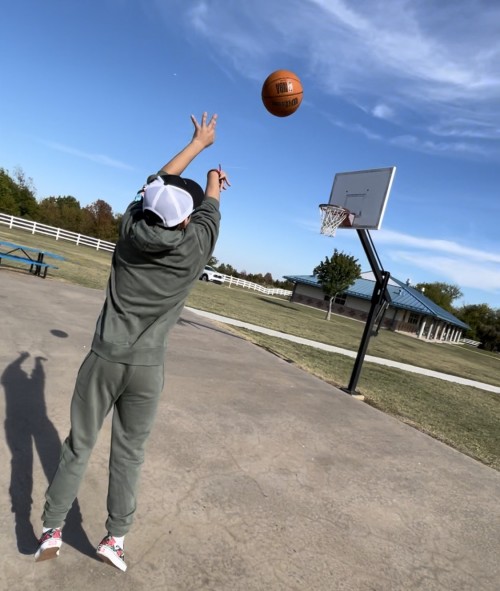 And this is he and I in his new bedroom: 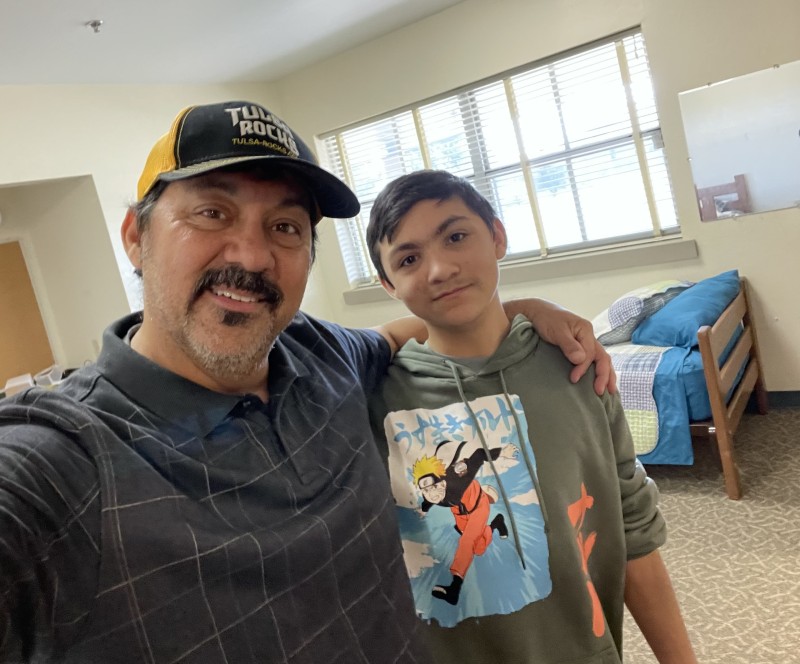 This is Atticus sitting on his new bed. He will have a bit of an adjustment with his new twin size bed since he has a queen size at home. 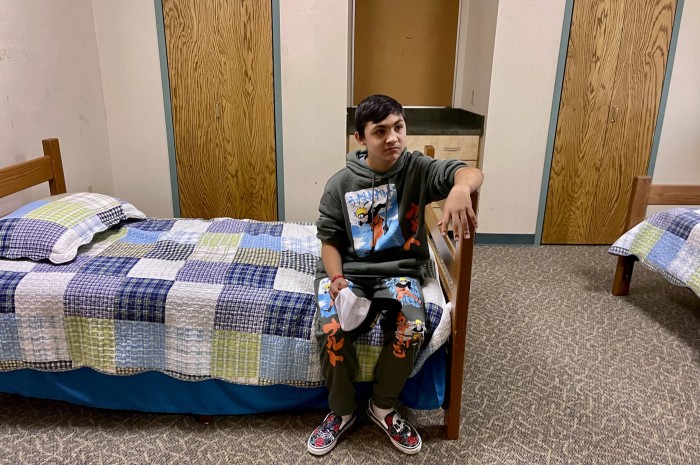 The whole campus and living quarters are very well maintained and clean. With so much open space and beautiful country side it’s a shame there aren’t horses in the barn or even a village dog or cat running around but I was told there are reasons for that.

All in all, I have still been shedding many tears trying to get used to this much quieter house. Our dog Domino and Atticus’ sister Angel have a huge hole in our lives now, but we are looking forward to November 18 when he comes home for Thanksgiving break.

If you’re going through anything like this and need someone to talk to for advice, I suggest asking your child’s pediatrician, do lots of research and open up to your friends and family. It takes a village!

As always, feel free to contact me and I’d be happy to tell you more about my experience: 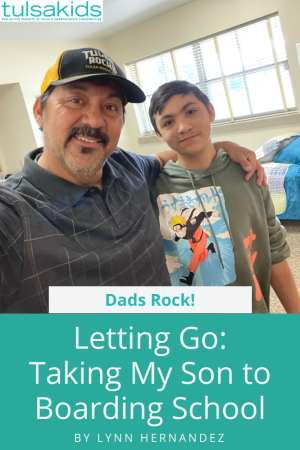