It looks like we’ve officially reached a turning point in the kids’ development. We’ve hit the stage where my kids are starting to speak a foreign language, a language known as Tweenglish. Like all important developmental stages, children progress at different rates, and the change is more noticeable in some kids than others. Lucy seems to have surpassed her elder siblings and plunged headlong into full-fledged Tweenglish. Much to the chagrin of, well, everyone else in the Nebula, she spits out lengthy, perplexingly meme-ified sentences with dazzling fluency one after another like a cannon firing off cans of alphabet soup stewed in a YouTuber’s crockpot.

We’ll be driving down the road, the kids smooshed shoulder-to-shoulder in the back of our old Explorer, and Lucy will emphatically share a story that sounds to the untrained ear like a cartoon-world AI glitching out followed by the phrase, “Well, DAD??? What do you think?”

While as parents, we’re both masters of the selective perception arts, Lucy refuses to be relegated to Schrodinger’s tween (the condition wherein she is both heard and not heard simultaneously). Indeed, the more perplexingly Tweenglish her story, the more emphatic she is that she receive an attentive response. 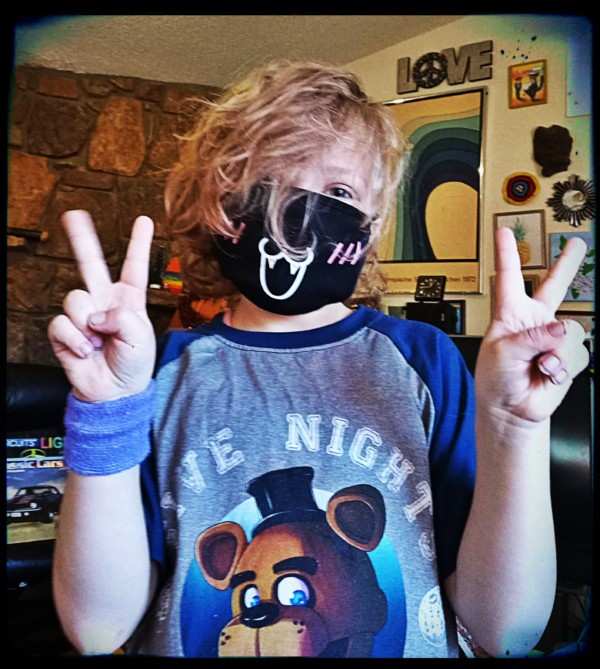 Fortunately for all involved, I was required to take a linguistics course as part of my college degree program, which I believe has given me a distinctive edge in deciphering her cryptic tweenspeak. I am settling comfortably into my new role as interpreter for my oft-bewildered husband.

That’s why I believe I’m in a perfect position to petition Duolingo to add Tweenglish to their list of languages right next to Klingon and Esperanto. I’ve even put together a few of Lucy’s most commonly used Tweenglish words to help get them started:

VSCO girl- This is an Internet subculture. It’s a type of girl that likes scrunchies, baggie shirts, and Hydroflasks. The origin of the word is from the VSCO photo app, which has a monthly fee so I can’t tell you what it means.

Andioop- Also seen as And I oop. According to Lucy, no one really knows what it is, but it’s “just a thing that VSCO girls say, like ‘sksksk.’” I believe it’s actually mostly used in reference to VSCO girls as a way of stereotyping them. From my research, many of these types of web-based slang words have etymological origins in Black LGBTQ culture and were at some point appropriated by white influencers, because of course they were.

Yeet- According to the Interwebs, “Yeet” is a highly adaptable word that is used in the expression of surprise, excitement, or movement and can function as almost any part of speech. In Tweenglish, it is usually associated with throwing or tossing something or even one’s self. Lucy describes it as “a funny thing you say when you’re throwing something.”

Senpai- Lucy is always talking about someone is someone’s senpai. This term comes from means simply “a crush.” It comes from the manga/anime world, but it’s used much more widely.

Ship- This is a word that many Millennial parents may be familiar with, especially if you spend any amount of time dealing with fandoms. According to Lucy, when you “ship” two people, you “feel like they’d make a really good couple, and you imagine them as one.”

OC- Original content or character. This is used to discuss YouTubers and grammers who have developed their own original art or other content versus simply creating fan art or reposting. Lucy has created an OC called Lucile the Cat.

Mood- This is another on-the-nose one. It means “what you’re feeling.” I might say something about wanting ice cream and a nap and Lucy will say “Mood” to reflect that she shares the sentiment.

To be salty- To be rude or generally unpleasant.

AFK- “Away from keyboard.” This actually doesn’t only apply to a keyboard but can mean any device and basically means you’re going to be offline for a bit. My kids use this constantly. They’ll say, “Hey, don’t do anything without me while I’m AFK” to let their siblings know they’re taking a break from the device for a while.

If you have any Tweenglish words to add to my list for Duolingo, hit me up in the comments below. Thanks for reading, and have a beautiful week! 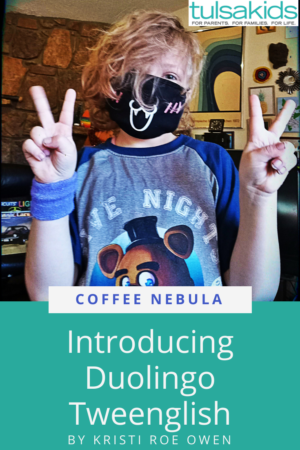