Interview Your Grandparents with StoryCorps App

A few weeks ago, my mother-in-law, who is in her 80s, was lamenting the fact that she never asked her mother or other relatives certain things while they were alive. She grew up in Batavia, NY, and her father died when she was 10 years old, after which she and her two siblings moved with their mother to live with her maternal grandparents and an uncle. My mother-in-law remembers the house they left (where she had her own room) as being filled with beautiful furniture. “I sometimes wonder what happened to that furniture,” she said.

This Sunday is Grandparents’ Day, a perfect excuse to get together with grandparents and interview them about their lives. StoryCorps has an app that makes it easy to create a list of questions and record the interviews. Or if you’re not able to record the interview with the app, you can record it with a digital recorder and upload the file to from a desktop or laptop computer.

When my paternal grandmother was alive, I had her write down what she could remember about her life. She was born in Leadville, CO to immigrant parents from the former Yugoslavia, but the family made the trip back to the “Old Country” when she was a girl, and then back again to the United States. One of the stories she told was about the authorities at Ellis Island taking her younger sister Ella away from the family because she was sick. The family didn’t know what had happened to her and were frantic. Ella was reunited with the family and after several days at Ellis Island, they were able to leave.

My grandfather was a Croatian immigrant and he and my grandmother met in Leadville.

They had so many stories. The one about my grandmother’s beloved younger brother, Johnny, who as a child fell through the ice of a pond, to be saved by what my grandmother says must have been divine intervention, only to be killed a few year later in the war. There were numerous stories of ghosts and supernatural happenings. They also lived in Leadville at the same time as The Unsinkable Molly Brown and Baby Doe Tabor, and my grandmother described seeing them in their furs on the streets of the old mining town.

While I’m grateful to have her written memories, I love the idea of a recording for several reasons. When you sit down with a relative with a list of open-ended questions, the interview becomes a free-flowing conversation. You have a chance for follow-up questions. The StoryCorps app gives you ideas for questions, lets you create a list and allows you to come up with your own questions as well. And questions are geared toward the type of interview you’re doing – you can get a list of questions for a grandchild interviewing a grandparent, for example. 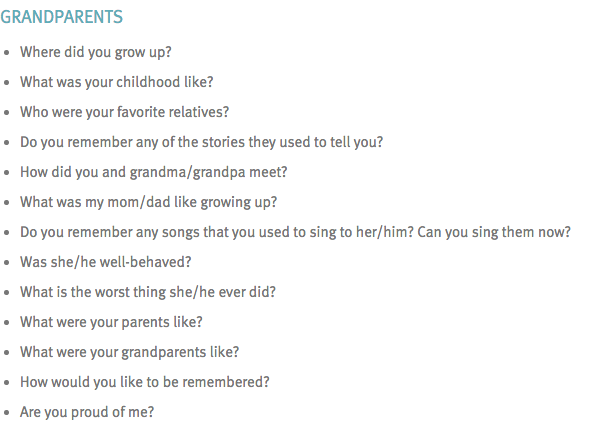 With a recording, you also have the loved one’s voice as part of the interview. And, recording someone on your phone forces you to sit in a quiet place, close together so you can hear. What better way to build a bond between grandparent and grandchild?

Today is my mom’s birthday, and I’m already making up my list of questions to ask the next time I see her. And, if you do your interviews before March 16, 2016, you can choose to upload them to the Library of Congress where they’ll be archived at the American Folklife Center. To learn more, click here and get started preserving the past.