In Praise of Family TV Time

I just watched an incredible piece on Max Headroom, a 1980s character played by Matt Frewer that, with the magic of a fantastic prosthetics team and some cool graphics shenanigans, pulled off the illusion of a CGI character a few years before that technology was capable of generating something on that level. Max Headroom was a response to the proliferation of junk television that flooded the airways in the 1980s – and there was a lot of it.

When I was growing up, long before today’s renaissance of prestige programming, it was pretty typical to have the TV going all day long almost as mindless background noise, anesthetically shifting through laugh-tracked sit-com reruns and sleazy daytime talk shows. Flip through the channels and you’d generally find more of the same until you finally landed on something halfway palatable – rarely something you’d choose of your own volition if given the opportunity, just a half-hour chunk of middling, hypermarketed TV tripe.

It’s little wonder that we frequently referred to the intrusive box in the middle of our living rooms as the “boob tube.”

While in the current age of streaming video, the race to add more streamers is somewhat diluting the waters with lower-quality content, a phenomenon aptly noted by South Park’s latest installment, there’s a greater degree of intention to the way we watch television today overall.

Sure, you can turn on YouTube and let it autoplay as the All-Seeing Algorithm gradually takes you to stranger and stranger locales in the cobwebby corners of the Internet (Don’t do this. Trust me.). But for the most part, we’re turning on the TV with a purpose, whether that’s to find the latest crime show or binge watch the latest season of “Stranger Things.”

And one of the best things about watching TV in the Golden Age of Television is the ability to make TV time a family event. While our family has tons of fun traveling together, checking out live music, playing games, and getting into various hijinks, spending that time sharing a show we all love is still one of our very favorite things to get into together.

For our family, settling in to watch whatever show we’re currently into is something to look forward to that doesn’t require us to spend hours away from home, which is a blessed relief when we’re constantly juggling schedules between school, doctor’s appointments, and various meetings.

Here are a few things we do to elevate our family TV time:

1. Set a time to watch TV together.

We’ve learned that the family tends to get more out of watching a show together if everyone has time to clear their minds and focus up. When we announce that we’re going to watch a show without any notice, the kids may be busy with other things or could be distracted while we’re watching. Letting everyone know that we’re going to sit down at 7 p.m. and watch an episode of “Twelve Monkeys” gives them time to clear their minds and clear their schedules.

A big part of the TV-watching experience for us is active viewership. After an episode ends, we always take a few minutes to share our thoughts, and it’s a great way to connect with each other. This means talking about what we loved about an episode, bringing up questions we might have, and getting into our theories. I love this part because even though it’s “just TV,” we’re actually engaging in literary analysis that builds the kids’ critical thinking skills.

It can be fun to binge a show, and binging has its time and place. But we’ve found that we tend to get more out of family TV time if we set a limit on how much we watch together at once and make it special. One or two episodes of a beloved show we’re all watching together preserves the value of the experience and gives us a chance to break away from screen time for other things.

What are you watching right now? Hit me up in the comments and have fun getting into some great TV in your little nebula this week! 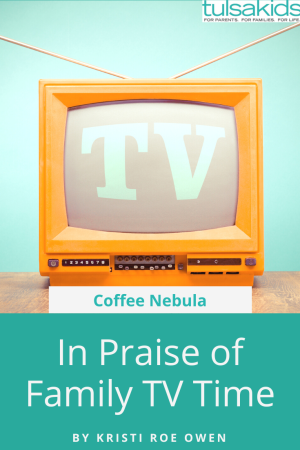