How to Throw a Summer Olympics Party

The Tokyo 2020 Olympic Games are scheduled to take place July 23-August 8, 2021. I don’t know when I last watched the Olympics. But thanks to Peacock, NBC’s free streaming service, I think we might be able to catch some this year! Here’s a schedule of some event highlights: olympics.nbcsports.com/2021/07/14/tokyo-olympics-day-by-day-schedule-highlights. If you are planning to watch the Olympics this summer, why not make a family party out of it? Here are some ideas for planning your own Summer Olympics Party.

The Guts (aka The Food)

You can’t have a party without some fun treats! Here are the best ideas I’ve found:

Simple sugar cones can be turned into Olympic torches in a variety of ways. For a healthier option, fill the top with slices of red, orange and yellow bell peppers. This recipe recommends filling the bottom of the cone with dip such as guac or hummus. Another idea is butter and cheddar popcorn. Or, bake a cupcake into the cone and decorate it with flame-colored frosting and candy. 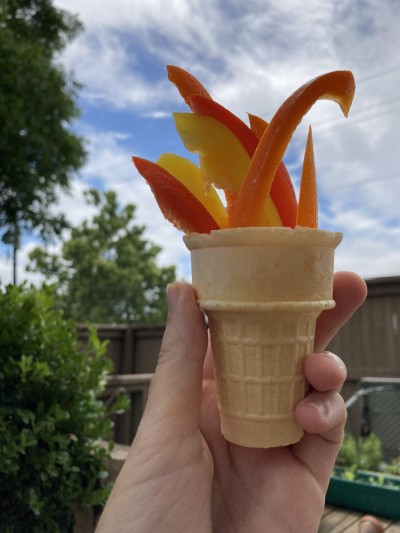 Other Olympic-themed cupcake ideas include using M&Ms to make the iconic Olympic Rings (this can also be done as a sheet cake). Or, this is less Olympics-specific but still cute, Red White and Blue Snow Cone cupcakes. Go, team U.S.A.!

I love this idea from blog.candiquik.com. Their version uses blue jello and other more specialized ingredients. But you could also just make a sheet cake with blue frosting and decorate accordingly.

Arrange blueberries, blackberries, strawberries/raspberries, cubed pineapple and kiwi on a platter to form the Olympic rings. A variation on this idea is to do this with bagels, but I don’t know that a fruit-topped bagel sounds all that appetizing?

Rowers on a Boat

A variation on the ever-popular “ants on a log.” Turn your celery stick into a rowing team! I went down a slight rabbit hole trying to figure out how many rowers are on an olympic rowing team, and how many oars they each wield. It was a bit complicated. But if you’re curious, check out this article. (The first bit is out of date, but I think the rest of the article should include more than enough relevant info 🙂 This idea came from ourfamilylifestyle.com. 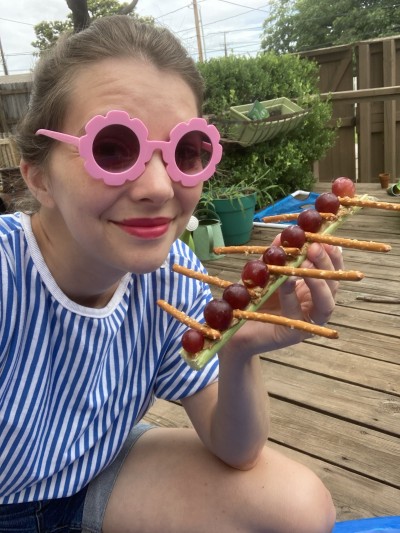 Before or after watching the actual Olympic games, try hosting your own competition! You can play games inspired by Olympic events. Think driveway basketball, running or swimming races, frisbee toss, etc. Or, you can play your favorite backyard games!

I ran across a bizarre game on parents.com that we had to try. Get two players to put on a shower cap. Cover the shower cap in shaving cream. Don your safety goggles. Take turns tossing cheese puffs at the shower cap. Whoever gets the most to stick, wins! Spoiler alert: It was very windy when we tried this, and we were terrible! 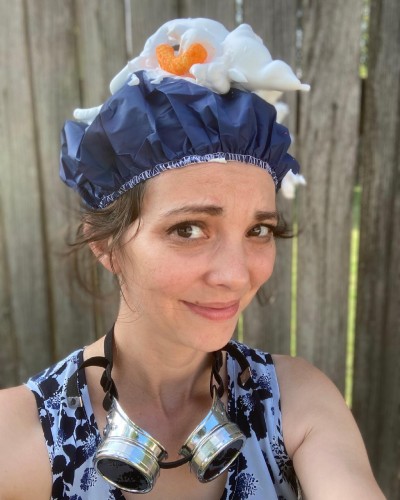 (We also called it a day after we each got one puff to land. Mostly because I didn’t want to waste more delicious cheese puffs!)

No Olympic competition would be complete without medals! Again, there are lots of ways to make your own Olympic medals. Decorate paper plates and attach a ribbon to them. Make and paint clay circles (air-dry, polymer or salt dough all work), and run a ribbon through them. Use cardboard and puffy paint. Or, my favorite, Gold(en Oreo) Medals. Simply take a golden Oreo and loop a red and blue fruit-by-the-foot into the center. The only downside – you shouldn’t try to wear it! So sticky! 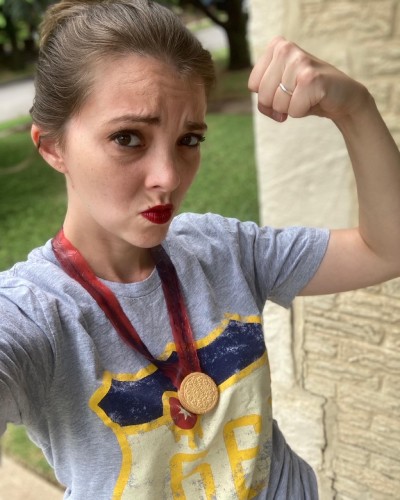 Well, that’s it for now! What Olympic sports are you most excited to watch this summer? Are you hosting an Olympics party? What fun games, food or activities did I leave out? Let me know in the comments! 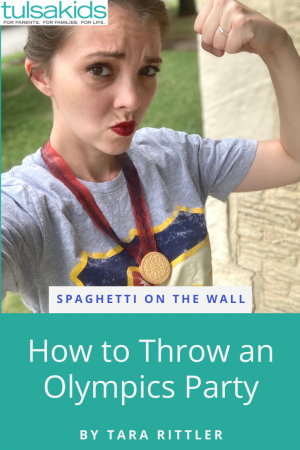