How to Spend 24 Hours in Dallas

About a month ago, I found out that The Darkness was doing a North American tour for their newest album, “Motorheart.” The month-long tour ranged from the West Coast, to Canada, through the MidWest and on to the East Coast. The nearest tour locations were Kansas City and Dallas and, “I’m the first to admit it,” figuring out how to get to their Dallas show became a driving force in my life for a few weeks.

The main problem was that Daniel was busy Sunday, April 3, the day of the show, so wouldn’t be available to watch Joss. Oh, and the fact that I hate highway driving, especially in a large city like Dallas, so…that wasn’t going to happen. (Yes, I get in my own way sometimes.) Long story short, my dad volunteered to go with us, and one of my Dallas cousins said she could watch Joss during the show. So we ended up on a mini family road trip with about 24 hours to spend in Dallas! 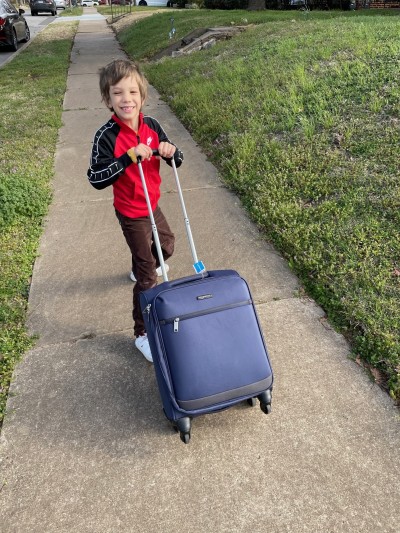 My dad lived in Dallas for a few years, so he was the perfect tour guide. Here are some Dallas bucket-list items we checked off this past weekend: 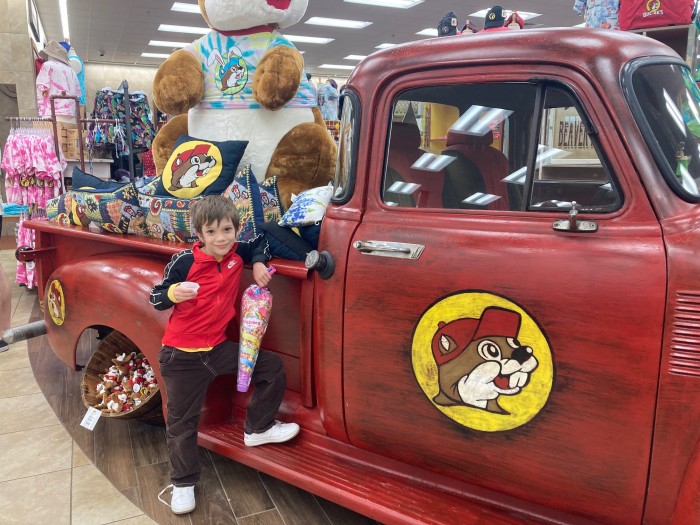 I’d heard of Buc-ee’s, but didn’t really know anything about it. However, once we saw the first Buc-ee’s billboard, my Dad said we had to go. Buc’ee’s is basically a Texas-sized gas station that feels slightly like walking into a small Wal-mart. They have their own clothes, home goods, made-to-order brisket, grab-and-go food items, snacks, etc. The one we went to was in Melissa, TX, which is about 41 minutes from Dallas. So if you’ve got young, restless kids who need a quick stop after three hours of driving, this is a good resting point. 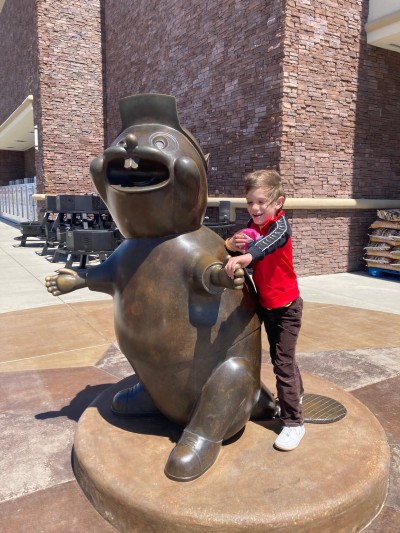 The brisket sandwiches smelled really good, but we just purchased a few snacks because it was time to head to our next destination:

Another beloved institution I’d never been to. In-N-Out Burger has a very limited menu, which makes it easy to make a decision. Hamburger or Cheeseburger? Vanilla, Strawberry or Chocolate Shake? And do you want fries with that? They do have a Secret Menu, but most of that involves adding patties of meat to your burger. So I stuck with a Cheeseburger combo meal with vanilla shake. 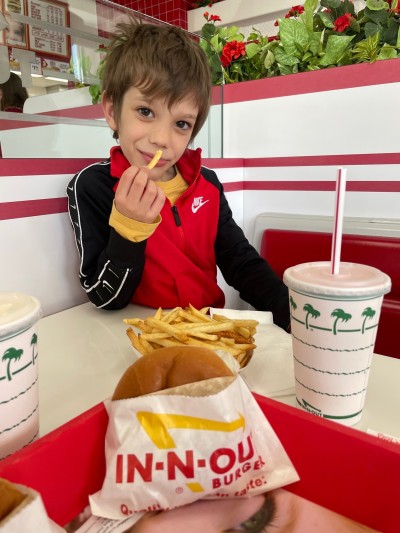 Although they pride themselves on peeling and slicing the potatoes for their fries every day, we agreed that the fries were a bit bland. Maybe it was just a bad day. And ketchup definitely helped. The burgers and shakes were delicious, though!

Stuffed full of burgers and shakes, next we headed to Bird Bakery. Decorated in pretty pastels, Bird Bakery is located in Highland Park Village, an upscale – and historic – shopping area complete with a theater and designer shops galore. According to its website, “Highland Park Village is America’s first shopping center and the prototype for shopping centers all over the country.” Fascinating! Most of the shops I probably wouldn’t have dared step foot in, being dressed for road-tripping and concert-going. But it would be a fun place to explore at length. And the architecture is beautiful. 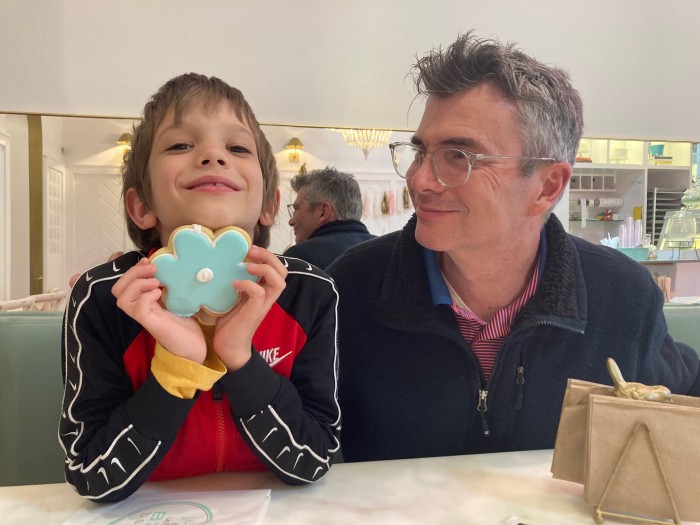 I had to order my monster cookie to go because was too full to eat it. However, Joss enjoyed licking the frosting off his sugar cookie (have to work on some manners). And when I finally got to eat the monster cookie, it was so tasty and perfectly chewy! The star of our purchase was the chocolate peanut butter bar that Dad got. So if you’re a PB fan, definitely start there.

Not far from Highland Park Village is Lakeside Park, a 14+-acre park running alongside a small river. This is definitely a popular place for strolling, picnicking and photo-shooting, in the middle of an upscale neighborhood. It was a beautiful day, so lots of people were out. We crossed the bridge to the Teddy Bear statues, which is an incredibly charming photo opp, especially for young kids. 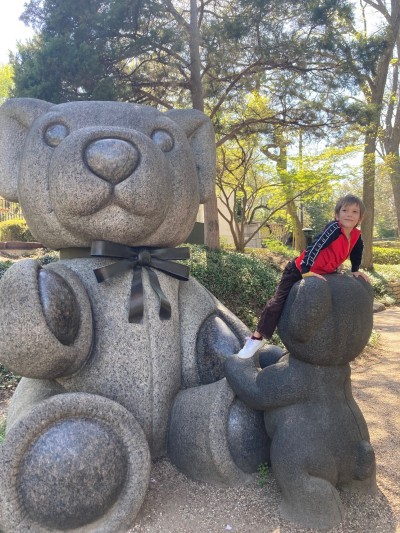 Here’s Mama Teddy Bear + one of her three babies. Fun for climbing on, too! 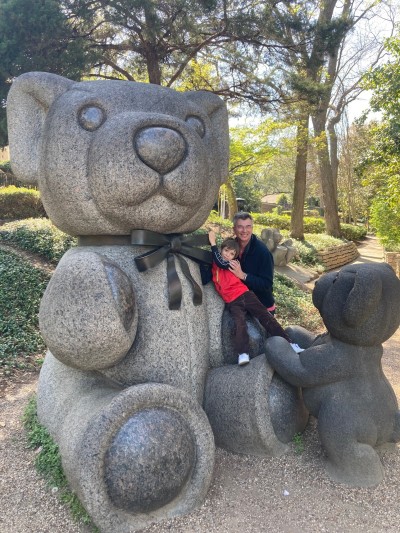 I should mention that through all our adventures, Joss was still most excited about spending time with my cousin. He kept asking, “When are we going to go THERE?!” Part of this was poor planning on my part – we ate a late lunch, and I hadn’t packed any road trip snacks with protein. Whoops! So there’s a bonus road trip tip.

Anyway, we finally dropped him off, and he was very happy, and then headed back to the Granada Theater for the show!! On the way, we stopped by the nearby Barnes & Noble, a two-story building that made me sad about our erstwhile Borders. 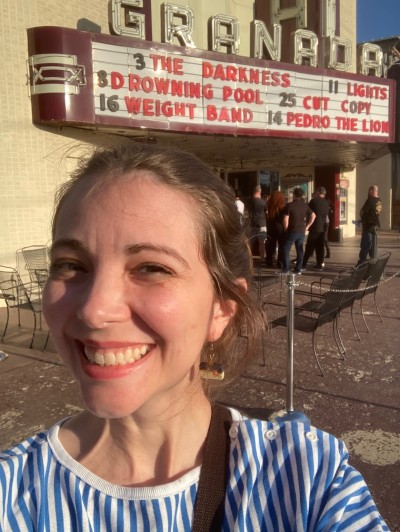 The Granada Theater is a fantastic venue. There’s a neighboring restaurant, plus other options up and down the street. There’s an $8 parking lot in the back, but we managed to find a free spot along the road before we even got there. It’s a beautiful old building with interesting murals and a marquee that begs to be photographed. It looks like they’ve got a great line-up of upcoming shows, with a little something for everyone. 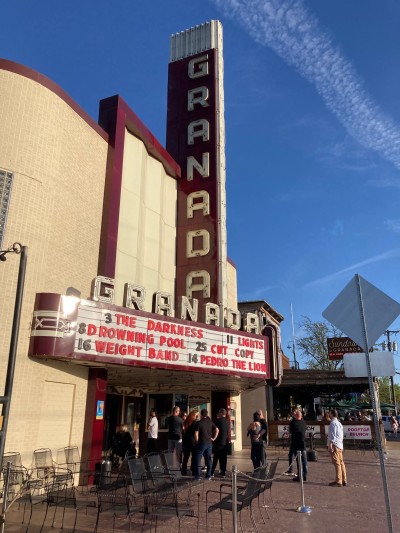 Because I don’t know how concerts work, we showed up at 7 p.m. – the showtime on our ticket. However, even though the opening act didn’t start till closer till 8, this worked out because we got a spot pretty close to the front. Could’ve gotten closer, but there were a few dividers in the room, which came with a ledge so you could set drinks/merch down, and that sounded ideal. Even though we were just drinking bottled water 🙂

The opening act, The Dead Deads, was loud and energetic, and I look forward to looking up more of their music. But of course, we were there for The Darkness, and let me tell you, if you have a chance to go to one of their shows (and are a fan of their music at all), DO! They brought so much energy, and interacted with the audience really well. Throwing guitar picks throughout the show, shaking hands, talking directly to audience members, etc. At one point, Justin Hawkins asked someone to video as he led everyone in a round of Happy Birthday for his mom. And everyone was singing along to every song, so it had that sing-along, “all together now” feeling. 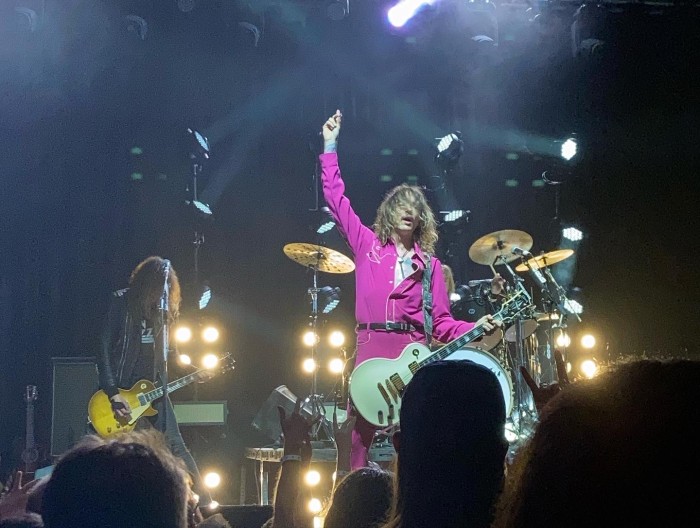 They didn’t seem to have any problem with cell phones during the show. However, when it was time for the encore, everyone was asked to put their phones away so we could all just experience being in the moment (and jumping up and down, singing along) to the music. And since this was their most iconic song, being “in the moment” for the experience of hearing it live for the first time was really special! 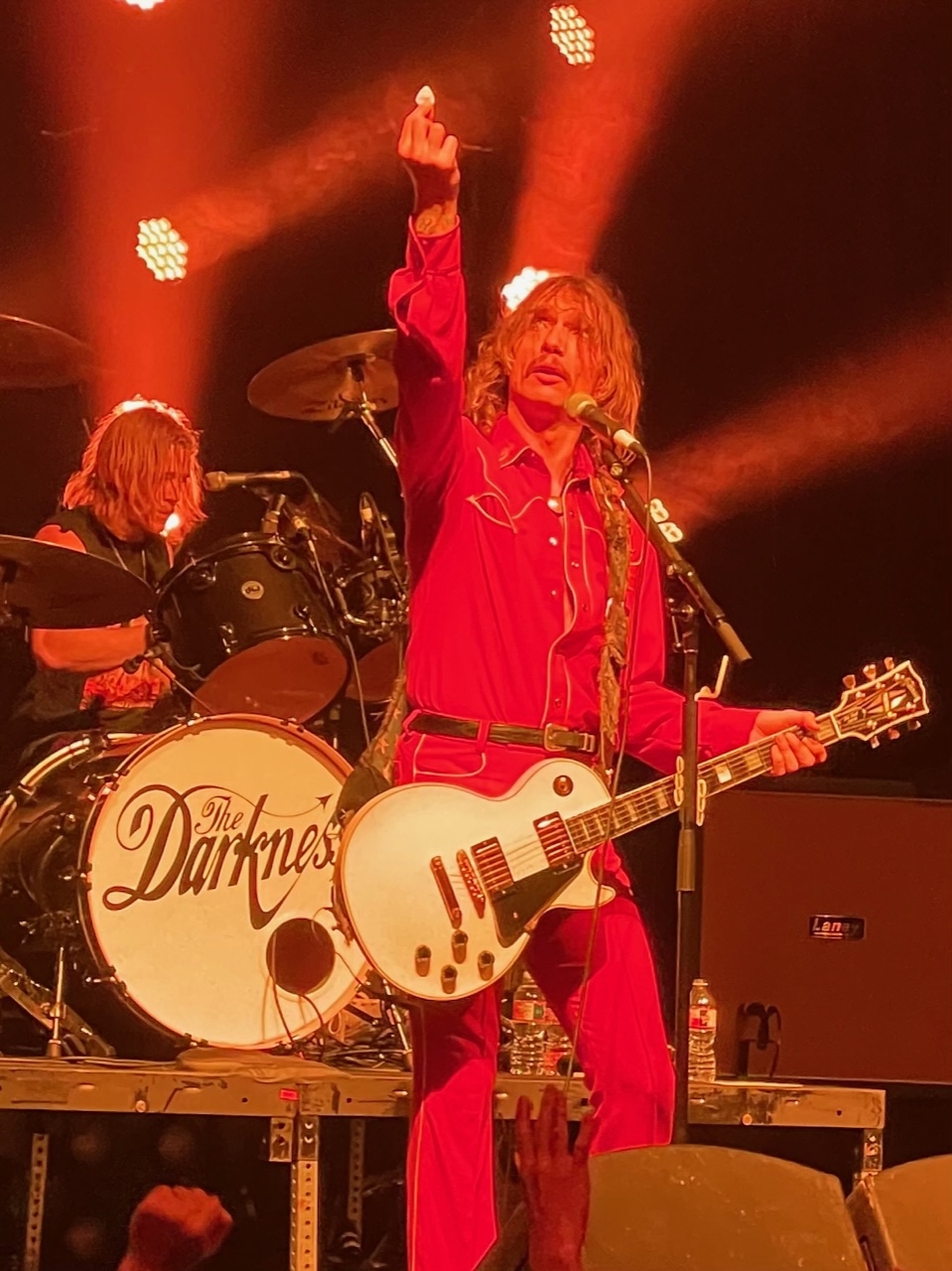 I don’t know why it felt so important to go to this show. Except for the fact that I tend to listen to the same songs over and over again, and for the past couple of years, several of those songs have been by The Darkness. My very favorite is “Heart Explodes,” from their “Easter is Canceled” album. (That tour got canceled due to the pandemic.) The music video is all scenes of the band getting ready for and performing at a large outdoor venue. And so I was OVERJOYED to learn it was part of their Motorheart tour setlist. After listening to that song however many times at the start of the pandemic and watching that video, I never believed I’d get to actually see it live! It was absolutely incredible. Surprised I didn’t bawl or something, but was too busy grinning ear to ear.

After picking Joss up and checking into our hotel room, we got a good night’s sleep. We stayed at the Aloft in Frisco because it was close to my cousin’s place, and it was clean and fairly cheap. 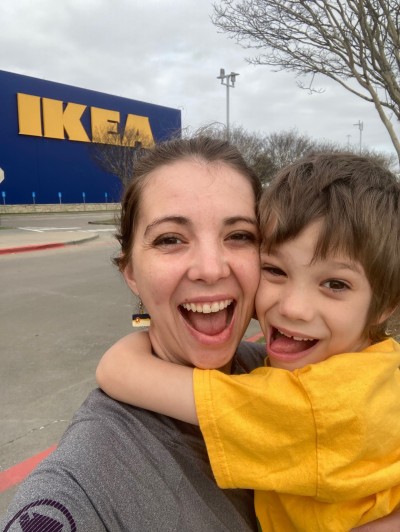 After waking up Monday morning and getting ready, Joss requested pancakes with fruit, so we headed to the nearby IHOP. However, the thing we were really excited to do before heading out of town was going to IKEA! Again, I’d never been here so was determined not to miss this chance. It was also about 2 miles from the hotel, so nice and easy to get to at that point. 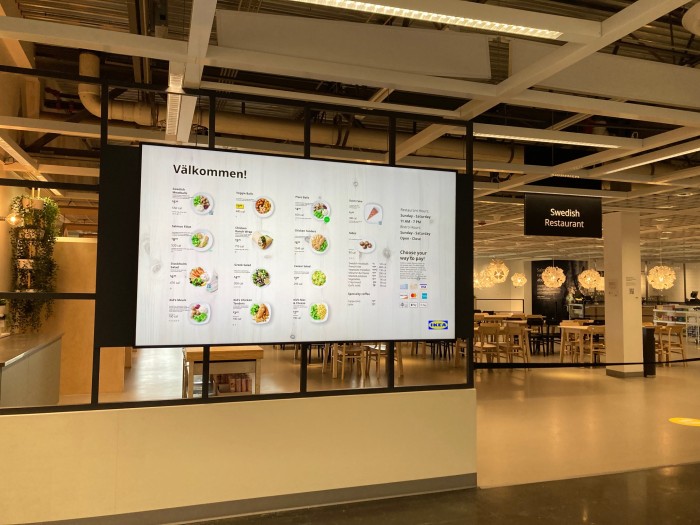 Since we were full of pancakes, we skipped the Swedish meatballs

Going into IKEA for the first time was a bit overwhelming. I was glad Dad had been there before and could explain how it works. 🙂 You walk through the EXTENSIVE showroom first. Here, you can take photos of or write down furniture numbers if you’re in the market for furniture. Once you arrive at the warehouse, you can get an IKEA staff member to find the furniture you needed. I believe they provided pencils and brochures so you could keep track of your desired purchases. There are a lot of small items you can pick up and take with you in the showroom area, but mostly you just look at everything they have available and then pick it up in the warehouse. 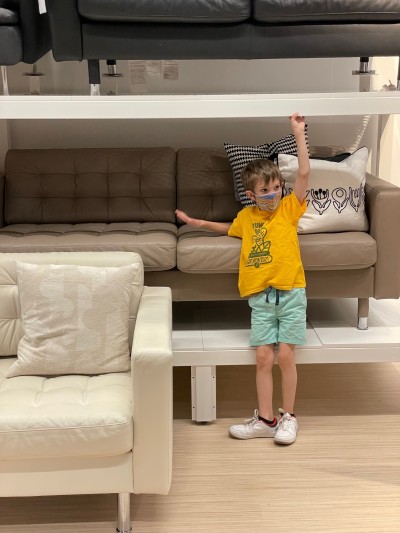 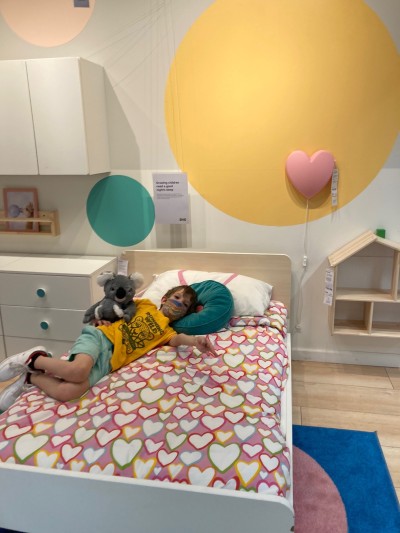 As you can see, IKEA is now Joss’s favorite place ever. He wanted to sleep on ALL the beds and sit in ALL the chairs. So keep that in mind that if you’re visiting with young kids. Your visit may be extended by at least half an hour. 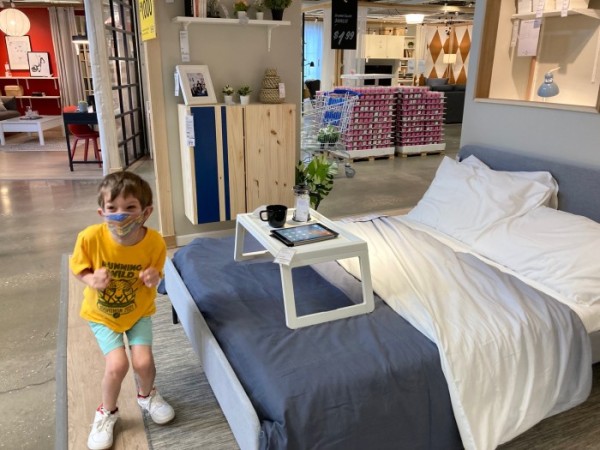 Caught this picture in between Joss jumping up and down with excitement. 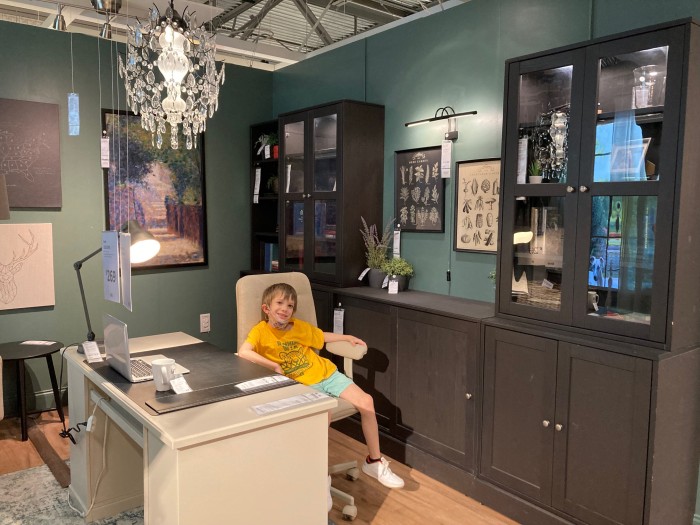 After a busy weekend, it was time to head home. Dad drove through driving rain a good percentage of the drive. So it was nice to be back, warm and dry. So grateful to Dad for being willing to take this trip with us, and to my cousin for watching Joss so the concert of my dreams could happen! <3 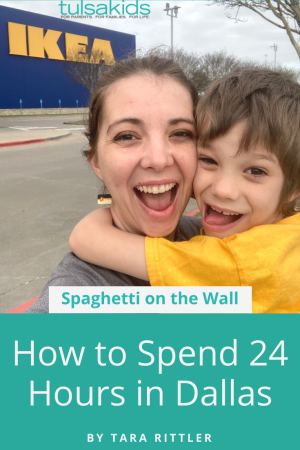