How Is the Summit Learning Experiment Going at TPS?

After last night’s school board meeting, it looks like north Tulsa is once again being promised more, but getting less, but more on that later.

I read an interesting article in the April 21 New York Times.  Reporter Nellie Bowles wrote about an open rebellion in a couple of tiny towns in Kansas. Now, if you know any Kansans, you know they’re very nice people, certainly not prone to protests, but something got the parents riled up in McPherson and Wellington. Summit Learning came to their schools. The same Summit Learning being used in Tulsa Public Schools, as reported in the Tulsa World. Kids in McPherson staged a classroom walkout, and high schoolers in Wellington organized a sit-in to protest Summit Learning. Parents have yard signs with Summit and a big red slash through it. One says, “Stomachs are Churning with Summit Learning.” Downtown windows declare, “Don’t Plummet with Summit.”

According to the article, “Silicon Valley Came to Kansas Schools. That Started a Rebellion,” Summit Learning happened and it wasn’t pretty.

Bowles writes, “Eight months earlier, public schools near Wichita had rolled out a web-based platform and curriculum from Summit Learning. The Silicon Valley-based program promotes an educational approach called ‘personalized learning,’ which uses online tools to customize education. The platform that Summit provides was developed by Facebook engineers. It is funded by Mark Zuckerberg, Facebook’s chief executive, and his wife, Priscilla Chan, a pediatrician.”

Well, there you go. Two people with absolutely no training in education or learning are personalizing learning for your children. By the way, I’ve written about this before. Just because something is done on a computer doesn’t make it new. Personalized learning is the old self-paced learning idea from the ‘60s, so don’t buy the idea that this is new and innovative.

Parents in Kansas noticed their kids coming home with headaches, hand cramps, heightened stress and anxiety. A girl with epilepsy went from having one seizure a day to having several seizures a day. Another wanted to wear hunting earmuffs to class because there was no reason for her to have interaction with anyone else in the classroom.

The article quotes parent Tyson Koenig: “’We’re allowing the computers to teach and the kids all looked like zombies,’ said Tyson Koenig, a factory supervisor in McPherson, who visited his son’s fourth-grade class. In October, he pulled the 10-year-old out of the school.”

A district survey in McPherson showed that 77 percent of responding parents didn’t want their child to be in a Summit classroom.

Bowles article cites other schools around the country – Brooklyn, Pennsylvania, Cheshire, Conn. – where Summit had been dropped because of protests from students and parents.

When something high-tech-y-sounding like Summit is offered to a struggling school system for free, it’s very difficult to turn down. Chromebooks, laptops, software, curriculum! All free! Students get to follow their own interests! Philanthropists will pick up consulting costs! Unfortunately, Summit has some major bugs that probably should have been worked out before they used it to experiment with kids. Many of the links provided for more information are questionable, both in terms of reliable information and decency. Parents also worry about data privacy. We know that Facebook doesn’t have the best reputation in that regard! No wonder they’re offering it for free.

Bowles writes, “In one class covering Paleolithic history, Summit included a link to an article in The Daily Mail, the British newspaper, that showed racy ads with bikini-clad women. For a list of the Ten Commandments, two parents said their children were directed to a Christian conversion site.”

The Daily Mail is not a source that I would want my kids using.

Students today can absolutely benefit from using the internet to access amazing video, websites, photography, historical documents and the like to enhance their academic experiences. It’s truly incredible what technology can bring to a classroom in the hands of an experienced and professional educator. That is not Summit Learning.

Using technology like Summit Learning to do self-paced curriculum on a computer stifles classroom discussion and critical thinking. It marginalizes project-based and cooperative learning, community-building and true interest-based inquiry.

Nearly 40 families are taking their kids out of public school in McPherson because of Summit Learning. They’ll be attending private school next year.

What is your experience with Summit Learning? 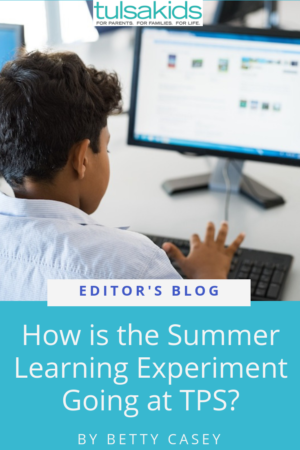