In my book group, we take turns making a list of book suggestions to vote on each time we choose a book. After one of our meetings, a friend texted the group saying something to the effect that no one should be negative about the list of book choices because it takes time to come up with the list, and it shouldn’t be critiqued. I felt she made a good point. I also felt that this admonition was directed at me, and I just felt terrible about it all day. I think those are two personality traits that I have: 1. Being opinionated and expressing my opinion (I assume that because I do, others will as well); and 2. Assuming that everything is my fault and feeling really bad and anxious about it. So, when I read Olga Khazan’s article “I Gave Myself Three Months to  Change My Personality” in the February Atlantic, it made me think. Maybe I could tone down being so opinionated (if I wanted to, I’m sure I could clear a room at a party by talking about subjects that are too serious), and maybe I could work on being less sensitive.

A bonus to reading the article came when my daughter Anna, a producer for the Illinois NPR show “The 21st,” had Khazan on as a guest, along with Brent Roberts, a psychologist at the University of Illinois at Urbana-Champaign, who, according to Khazan’s article is the “best-known expert on personality change.” Listen here: will.illinois.edu/21stshow/story/changing-your-personality-in-3-months.

It has always been my opinion that you couldn’t really change your personality. But, even though I have strong opinions, I do sometimes change them. That would be a high “openness” score on the personality test that is mentioned in the article and on the show. More on that later.

Khazan said that she “never really liked” her personality, “and other people don’t like it either.”

In her research for the article, she found that people who work at it actually can change their personalities, and sometimes it can happen fairly quickly. The trick is to start acting like the person you want to be. That made sense to me. I used to tell my kids that they should watch people around them that they admire and observe what they do and practice some of those actions. Khazan also found studies that show that, while personality is fairly stable over time (if you’re an introvert, you’ll probably not become super gregarious), but “our temperaments tend to shift naturally over the years…Generally, people grow less neurotic and more agreeable and conscientious with age, a trend sometimes referred to as the ‘maturity principle.’”

Which brings me back to that personality test I mentioned earlier. The test measures five traits that psychologists have identified as making up personality. They are the following: extroversion; conscientiousness; agreeableness; openness; and neuroticism. If you have a high score on neuroticism, you may be pretty anxious and depressed. You can take the test yourself at personalityassessor.com. There’s a short version and a longer version. I took both and found the longer version to be better because you could get into a little more detail. It’s the IPIP-120 Personality Test. Fortunately, despite the fact that I get anxious and have to clean my house before I can go on a trip, I scored low on neuroticism and high on openness.

I’m pretty agreeable and conscientious, too, but a little lower on extroversion. In my experience, that area can be changed. I was a shy, quiet kid, but I was fortunate to have a high school teacher and a college professor encourage me to use my voice – in other words, talk in class! Once I did, I realized that people listened, and that I did have something to say (maybe that was my road to being opinionated!). Also, teaching and generally working on connecting and listening to other people has helped. But I would not call myself outgoing, and I need my alone time. But the “fake it ‘til you make it” concept can work if you give it a try.

So, take the test. Have your partner, your co-workers or your friends (maybe your book group) take it. Khazan, who was “off the charts” in neuroticism, found that doing improv helped her change, but meditation didn’t work for her.

Whatever, I find it comforting to know that there are things that I can identify that I want to change about myself – and that I can do it. As Professor Roberts said in the article, people want to believe that they CAN’T change their personality because it “simplifies your world in a way that’s quite nice.” It relieves us of responsibility for how we are if we accept that we can’t change. In a world where people seem pretty rigid these days, it’s nice to think we can improve ourselves. What do you think? Can you change your personality? Would you want to? 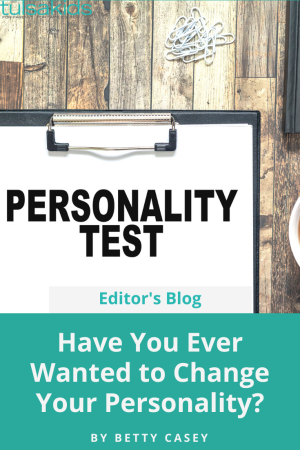 School Choice Bill May Leave Most Parents with No Choices

A Love Letter to My Children