What makes a man a father? Is it the simple act of donating sperm and DNA? Is a biological link sufficient or is something more involved required to be considered a father? We hear all about the terrible stepfathers but there are many wonderful men that take on the role and do a great job with parenting.

After the initial shock and hurt, I had recovered from the divorce and built a good new life with my children. I never planned to marry again, I just couldn’t imagine a man existed that could fit into our close family.   My daughters and I were a complete family, a tight unit of three.  For a man to be allowed into our inner circle, he would have to be the perfect match, not just for me but for all of us. It wasn’t possible, I told myself, and I wasn’t willing to settle for less than wonderful for me or my girls.

As I was having lunch at Ri Le’s, Steve walked into the restaurant and into my life. We had dated in college twenty years previously and although many years had passed, a spark was relit.  I quickly sensed he was going to be somebody special in my life and after 6 months of dating, I introduced him to my daughters.

He knew how to interact with the kids on their level and they quickly became attached to him. Watching him bond with my children made me fall even deeper in love and my resolve to stay single rapidly dissolved. After 3 and ½ years of dating, he met with them secretly to discuss proposing to me, wanting their opinion. Their response, “what took you so long?!”

Although Steve had been previously married, he had no children prior to marrying me. He had spent the previous 17 years of his life in peaceful solitude and willingly gave it up to join a loud, talkative family of three females and three cats. He took to parenting like a duck to water; learning to braid their waist length hair, spending hours helping with math homework, enduring noisy nights of slumber parties, going to parent teacher conferences and teaching two teenagers to drive. He didn’t try to change my kids or be the big, tough disciplinarian; he came as a friend, a role model, a teacher. Through great patience and unconditional love he earned the title of parent. 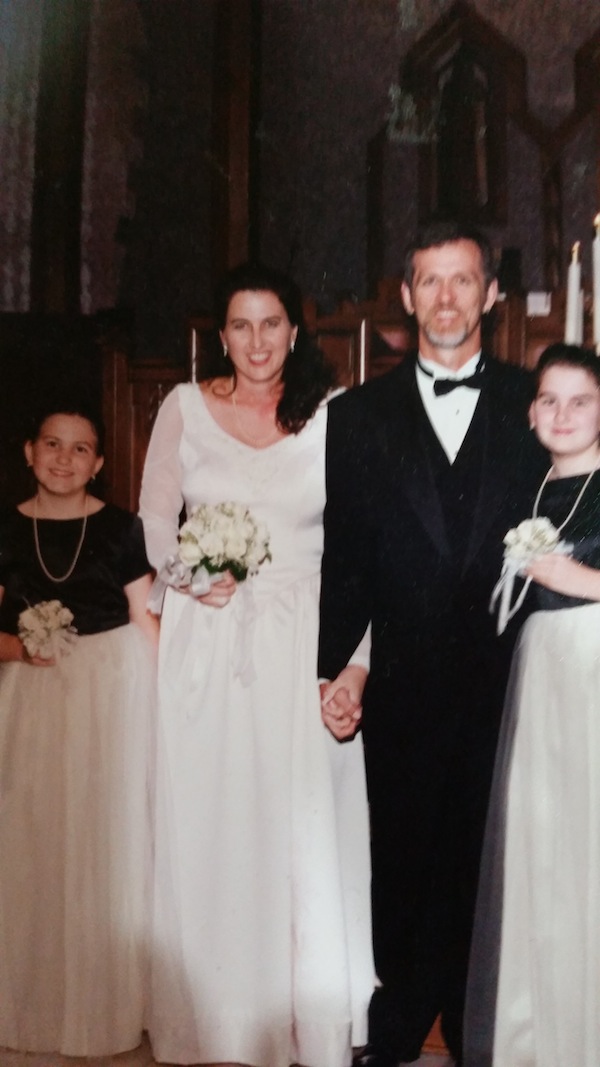 Before Steve, I feared a man would weaken our bond but he made our family even stronger; a tight circle of three growing to be a solid group of four.  I never thought anything was missing from our lives but soon, I couldn’t imagine a life without him. When the girls left for college, he felt the empty nest sting even more sharply than I did. As we watched our daughters (yes, they had become OUR daughters) walk off together to find their classes, he said sadly,” I just didn’t get enough parenting time.” How could I not love that man?

This is my Father’s Day homage to Steve and all the other stepdads that take on the task of raising another man’s child, show up day after day to do the real work of parenting, provide not just a home but a heart full of love and acceptance. You may not share DNA with the children you raise but you share your hearts. Happy (step) Father’s Day!