Get Crood This Thanksgiving with The Croods: A New Age

It’s been so long since I’ve seen the inside of a movie theater, I fear I’m on the way to forgetting what they look like altogether. The last film I saw with the kids was the final Star Wars at Cinergy. Since the pandemic came along and screwed up everything possible, entertainment has changed immeasurably. I had feared for a time that any sort of small or big screen entertainment would be out of production for years to come.

Fortunately, the entire world has not ground to a complete halt, and Hollywood has continued to produce what they can given the circumstances. Given the myriad restrictions thrust upon us in our everyday lives, it seemed somewhat obvious to me that animated features would be more easily produced. No sets full of people and sound stages of bustling activity are required to animate a film, and most cities these days have the infrastructure to handle the high bandwidth required to send audio and video files to be finished at home by animators and sound engineers working remotely at home.

None of that had any reason to do with why the release of The Croods: A New Age has been delayed since 2017, but it was still nice to see that DreamWorks could get a feature film to market just the same. Better yet, the studios have made arrangements for press to forego the usual morning screenings at the local theater to give us special secure access to screen this film in the comfort of our own home.

So while we continued our seemingly neverending family solitude, forgoing the usual family outings in our desire to remain virus-free, we watched The Croods. And we enjoyed it. At least I think we all enjoyed it. A couple of the kids kept running off and in and out of the room, but there were plenty of laughs throughout the film.

New Age is a continuation of the 2013 movie that introduced us to the Crood clan, presumably picking up some time after the first film ended. Having not seen the first film, I don’t know how it ties into the second, but after having watched the film, it seems it doesn’t really matter. The Croods are a family of cave people continuing a search for “tomorrow” from the first film. The characters are voiced by some well-known actors, including Nicolas Cage, Ryan Reynolds, Emma Stone, Peter Dinklage, and the forever charming Cloris Leachmen as Gran. She’s 94 and still acting!

Backing up a strong cast of capable voices is some genuinely well-executed writing. The film does a fine job of keeping an audience of all ages engaged and entertained. While many animated flicks fall short in keeping the attention of the adults in the room, Croods 2 does not. With plenty of anachronistic plot devices tying the stone-age existence to the modern technological world and a healthy dose of adult humor, this film succeeds in providing fun for the whole family.

Having created such blockbusters as Shrek and How To Train Your Dragon, DreamWorks has the chops to produce fine animated entertainment, and Croods is no exception. The visual world of prehistoric hominids is full of life and color, including an array of bizarre ancient animal mashups of early and nonexistent creatures. The family has their own pet cat, the Macawnivore, a fun and talented version of Sabre Tooth Tiger. There’s the piranhakeet, which is pretty much as it sounds, a feathery friend with a ferocious bite. They also come across the fearsome land shark, which is pretty much exactly as you would imagine. The Croods are a jovial caricature of early man and everything in their world is a colorful and exaggerated rendition of the “croodaceous” period.

The plot and writing of The Croods is well done and keeps the viewer engaged in the film. There is no super deep meaning to be found in the subtext and there won’t be any unspoken discussion of existential dread, the fate of man, or our place in the cosmos. What you will find in the screenplay is good family fun with an emphasis on self reliance, self discovery, and the value of family. It is a prehistoric bit of fun and it certainly worth the 90-odd minutes spent ingesting the whole affair.

The Croods animation is also up to par as we would expect from DreamWorks. They create a prehistoric world full of fanciful creatures long extinct in our time along with a playful mix of nonsensical mix of completely fictional ancient fiction.

I wish I could tell you this film was being released direct-to-streaming like so many films coming out right now because we want you to stay safe this Thanksgiving. If you do plan to catch a film at the theater, Cinergy seems like a safe bet since seats are already fairly distant. If you plan to watch at home, this film will be released on VOD on Christmas Day.

Be safe and have a happy holiday from the Nebula family! 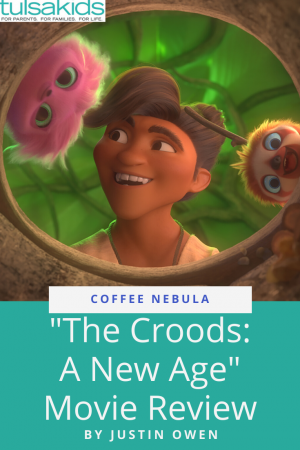