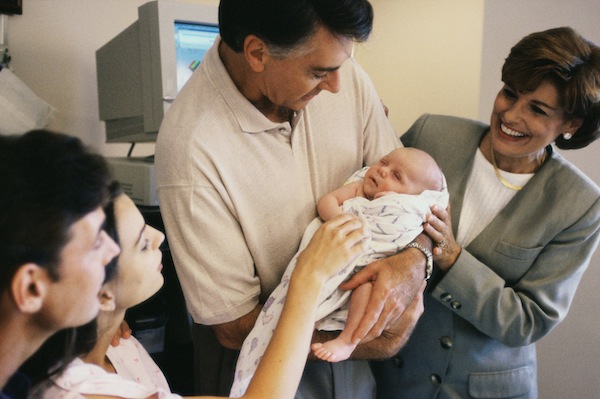 The day my first child was born was obviously a monumental occasion for her father and me, but we weren’t the only ones thrust into exciting and unfamiliar territory. Her birth was also the birth of two new grandparents. The look of sheer joy and love on the faces of my parents as they held their first grandchild sent me into post-baby, emotional ugly cries. Such a perfect moment, but what I didn’t see was the fear. Just as I was nervous about caring for this new little life, my parents were nervous about their new roles too.

“It seems so simple. There’s this beautiful new baby to love and all you want to do is be with her,” says Susie Lantz, my amazing mother. “But at the same time I had to remember that she’s not mine. I was worried that I wouldn’t feed her or soothe her the way her parents wanted. I had to follow their rules and that was nerve-wracking.”

For many parents used to being in charge, deferring to the rules and wishes of their children and their partners is humbling. Some worry about being too intrusive, or not meeting the parents’ standards. Others fear they’ve been out of the baby game for too long and won’t be up-to-date on modern child rearing techniques…is it back or belly that’s best?

Becoming a grandparent will add a rich new dimension to your life, and stress shouldn’t be a part of it. Here are five tips to help you avoid common new-grandparent pitfalls and handle your new role with flair and grace.

Right from the beginning, many expecting parents experience tension or a feeling of being torn between sets of grandparents asserting their wishes and opinions. It’s a recipe for stress that soon-to-be moms and dads definitely don’t need. Stay positive as much as you can. Be flexible and focus on supporting the new parents rather than telling them what you want. They’ll appreciate it.

Buying for the baby is fun, but gift-giving has its pitfalls. Pick up a few minor things and gauge the reaction. Some expectant parents welcome all contributions; others would prefer to make most of the choices about clothing and equipment themselves.

If you have misgivings about your son or daughter’s mate, try to overcome them. That person is going to be your grandchild’s parent. Give the spouse a chance to prove his or her worthiness in this new role.

This goes not only for the individual rules new parents set, like bedtimes, naps and snacks, but also the new safety standards and laws surrounding children that have gone into effect since yours were small. Back sleeping for infants is a big one and car seat laws have recently taken center stage as well.  A new law in Oklahoma requires infants and toddlers to ride in a rear-facing car seat until the age of two — or until they surpass the weight or height limit of their rear-facing seat. The same law also mandates that children younger than 8 years, who are shorter than 4-feet and 9-inches tall, must ride in a booster seat. Safety is number one for all parents, not just newbies. So check with experts, try taking a first aid class or even baby CPR. Keeping your grandbabies out of harm’s way is worth it.

Be cautious about offering opinions or advice unless asked directly. And even then, tread lightly and express yourself gently. If you try to intervene with a contrary opinion, you’re setting yourself up as an adversary, which may put strain on your relationship. And remember, no gloating or “I told you so” when something you disagreed with doesn’t work.

Your career as a grandparent begins even before your grandchild is born. From the moment you get the good news, your actions and reactions matter… because you matter. You will always be the best nurse, babysitter and shoulder to lean on for your children and grandchildren. Welcome to the greatest job you’ll ever have, because only the best parents get promoted to “Grands.”