I’ve watched with interest the brouhaha going on in Stillwater over transgender students being allowed to use the bathroom which conforms to their gender identity. I grew up in Stillwater (mostly) and taught English at Stillwater High School. That was at a time when LBGTQ students would have been in the closet hiding their identity. When students are pretending to fit into whatever is the mainstream perception of personhood, then there’s no social conflict. But the internal pressure from stigmatization and lack of acceptance is real for LBGTQ youth. And it’s intense. In fact, “suicide is the second leading cause of death among young people aged 10 to 24, and lesbian, gay, bisexual, transgender, queer and questioning (LGBTQ) youth are at significantly increased risk,” according to The Trevor Project.

These days, LBGTQ youth do find more acceptance, and can be open about their identity. It does, however, take some courage to come out of the closet, because there are still those who stigmatize LBGTQ individuals. Young people can be particularly vulnerable to bullying and prejudice, even from their own families.

So, why would a state leader make it more difficult for these young people? Why would he bully these young people? Secretary of Education Ryan Walters, who is currently running for State Superintendent of Public Instruction, attempted to stoke fear in Stillwater Public School parents over students using the bathroom of their choice. This has been the policy for years and has never been a problem. Could it be that Walters is suddenly concerned about bathrooms because he’s running for office?

And, as State Superintendent, wouldn’t he be responsible for all students, including trans youth? Is his plan to only represent cisgender youth?

Stillwater has allowed transgender students to use the bathroom that fits their identity for many years. Interim superintendent Gay Washington wrote in a letter to parents that it is a non-issue: kgou.org/education/2022-04-19/stillwater-school-board-asks-oklahoma-to-make-bathroom-rules-for-transgender-students

“The notion that transgender individuals are more prone to inappropriate behavior is categorically false.”

Trans youth are not scary. What is scary is a state leader who stirs up trouble and prejudice against young people who are just trying to live their lives. These are kids who are doing their best to get through high school and to move on to whatever future they can imagine for themselves, just like everyone.

When state leaders such as Mr. Walters and Oklahoma Attorney General John O’Connor attempt to paint these young people as people to fear, then they are giving permission to haters. They are giving them permission to bully, to tease, to ostracize human beings just for existing. Fear and hate will move us back to that time when I was teaching when young people were afraid to be themselves. That’s wrong. Fear and hate should not win. 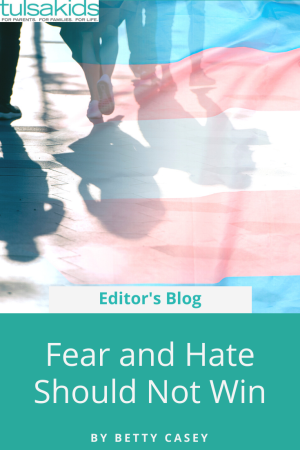